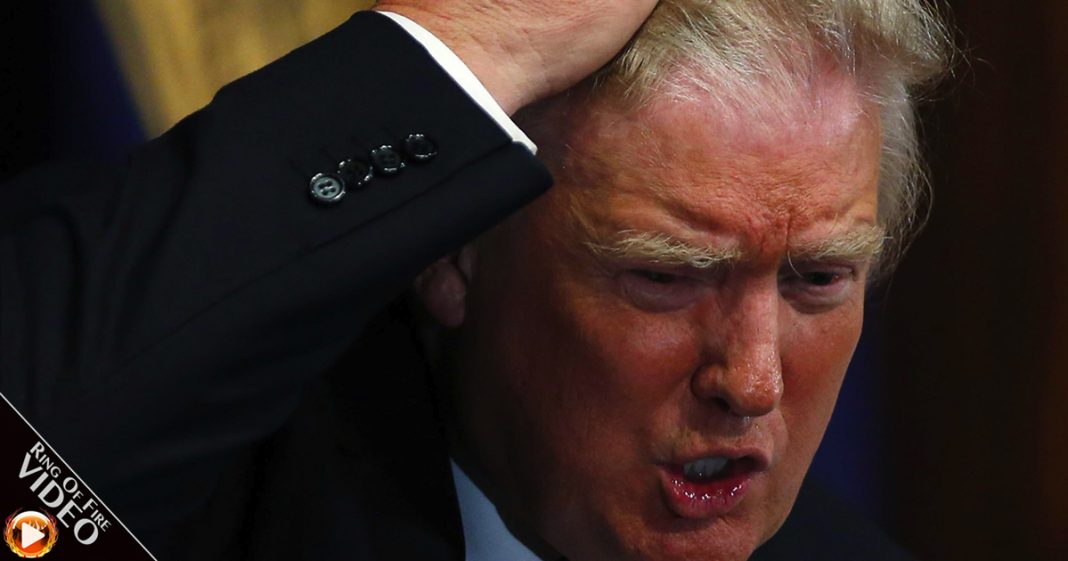 According to an interview on Salon.com, one Republican elector who says that he and other won’t be voting for Donald Trump has said that the Trump campaign is threatening their future careers if they don’t play ball. The Ring of Fire’s Farron Cousins discusses this.

As of right now, according to Lawrence Lessig, there are close to 20 Republican electors who are planning to defect and not vote for Donald Trump in the upcoming electoral college voting. Now, according to an article on salon.com, they spoke with an elector, one of these defecting electors, who spoke on the condition of anonymity saying that he and the other electors who have defected are now getting threats from the Donald Trump campaign, specifically the Trump campaign is threatening their political career, political career future or whatever, not physical threats but basically saying, ‘You do this, we’re going to make sure you never work in this town again.’

Again, with all of the news that’s out there right there, Salon is citing an anonymous source so we have to look at it a bit skeptically. When we see what Donald Trump has done in the past when faced with any kind of opposition, any person who disagrees with him, this does sound incredibly plausible and very likely. Salon, very credible news outlet. Never had a problem with them in the past. I do want to refrain from flat out saying this is absolute truth. I will say this is most likely true here.

If the Trump campaign is doing this, they’re actively fighting against the foundation of American democracy. That’s a problem for a guy who wants to run the country. If they can’t respect the constitution and the institutions that the founding father set up for the United States before they even take office, why would we assume that they would respect them after they take office? Now, again, it is perfectly illegal, well spelled out in the rules of this country that electors can choose the vote for someone else. That’s just how it goes. Basically the popular vote, our vote, one person one vote really doesn’t matter. It’s these electors who elect the president because they can flip and vote for someone else. They can do that …

Again, we look back in the Federalist Papers. They spelled it out there and they gave the reason for electors wanting to do this. It has actually happened two other times in American history. The only problem is that if enough electors defect and Donald Trump does not hit that electoral college threshold of 270, the vote then goes to the US House of Representatives controlled by Republicans, more than likely Trump is going to win. Unless the House of Representatives, Republicans get together and say, ‘We don’t want him but we have the opportunity to stick another Republican in the White House.’

As horrible as that would be, at this point, honest to god, anybody is better than Donald Trump. Anybody is better than Donald Trump. That’s a horrible thing to have to say, but Donald Trump is a nuclear disaster waiting to happen. We’ve seen the idiots that he’s packing his cabinet with who want to destroy the institutions that they’re now in charge of running. They want to destroy the planet. They want to destroy international relations. That’s what we’re going to get under Donald Trump. Yes, I believe that anyone else would be better. You could stick Charles or David Koch in the White House and they wouldn’t do as much damage as Donald Trump would do. A lot of people are probably disagree with that. I disagree with you. I think Donald Trump is probably the worst possible pick for president out of every single citizen in the United States, maybe not David Duke. All right. I’ll give him that. Donald Trump is a hair better than former KKK leader Donald- David Duke. I get the two confused sometimes.

The bottom line, again, back to the Salon story, Donald Trump and his campaign allegedly threatening to retaliate against these defecting electors. To that I say more people should defect. If this story turns out to be true, it shows that the Trump campaign, Trump administration, Donald Trump himself does not care about the United States Constitution and the rules of the United States. On those grounds, more Republican electors should defect. That’s what this story shows. It doesn’t show necessarily that people are scared. It’s actually giving us a reason for more electors to send a giant middle finger to Donald Trump on December 19th.