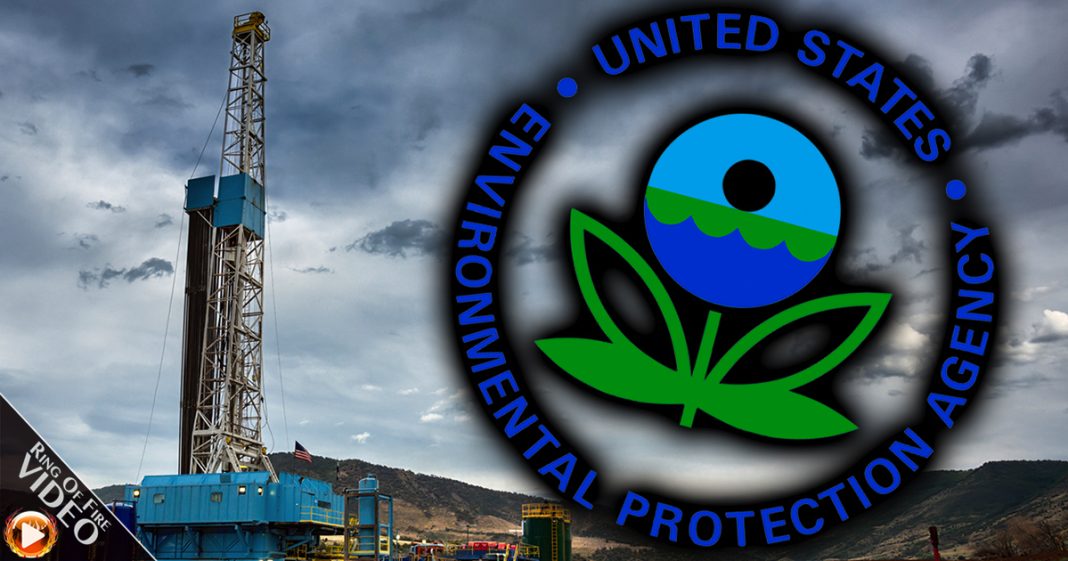 After failing to admit that fracking can poison drinking water, the EPA has finally reversed course and publicly admitted that there is no science to back up their “fracking is safe” claims, and that yes, fracking can and will pollute drinking water. The Ring of Fire’s Farron Cousins discusses this.

The Environmental Protection Agency has finally finalized their report on the effects of fracking and drinking water. Eighteen months ago when the first draft of this report was released, they said that they didn’t have enough information to definitively link fracking to any form of water pollution. Now this finalized report actually says that there is not enough evidence any where to show that fracking does not pollute ground water and drinking water. Basically a complete 180 in just 18 months. So yes, this new report from the EPA says that fracking absolutely has the potential to contaminate drinking water. Now this is huge, but of course at the same time, it shouldn’t be surprising to anyone. This report was long overdue and even the scientist and the court systems had already figured out that fracking does 100% contaminate drinking water.

Two court cases in Pennsylvania have already shown the connection between fracking and polluted ground water and scientists have made this link for decades. So yeah, the EPA’s a little behind the eight ball on this one but hey, at least they finally decided to come out and make this claim. Kind of, because when you actually read the report it says that further studies need to be done to make sure that this link actually does exist. Basically the EPA said that fracking does contaminate ground water or that it could contaminate ground water, but they’re still not 100% sure.

Listen, there is no question here. This isn’t one of those things where you need to keep doing studies and studies and studies because the studies have been done by scientists again for decades. They find arsenic and other fracking chemicals in the drinking water of people who live near fracking wells. Everyone who’s seen the movie Gasland, or I’m sure you’ve at least seen the images of people lighting their tap water on fire because it contains diesel fuel from the fracking chemicals pumped into the ground nearby. That’s not questionable. That’s not confusing. That’s definitive. That’s what that means EPA.

Furthermore, we do need more studies. I’ll agree with them on that, but only because we need to know what other fracking chemicals are leeching into the ground water there. Right now because of a rule called the Halliburton Rule, we are not allowed to know what chemicals are involved in these fracking mixes that they pump into the ground by the gallon. We don’t know. We can only gleam from the chemicals that we find in our drinking water. That rule has to go and that’s something the EPA needs to fight for. Of course they only got a month to do that because one Donald Trump comes in and cleans house, all of these EPA reports on the dangers of anything are going to go by the wayside.

Fracking is dangerous and over the course of its life, the natural gas that we pump out of the ground from fracking is actually more dangerous than coal. The only solution is to switch to renewable alternative energy sources that are widely available. The technology is there. We’re just unwilling as a country to take that first. In the meantime we have no problem pumping these chemicals into our ground. Causing earthquakes and contaminating water of United States citizens. There are plenty of alternatives out there. The technology is widely available. We’re just stuck in the past and apparently perfectly content to poison our own people so that we can get just a little bit more natural gas out of the earth’s surface.