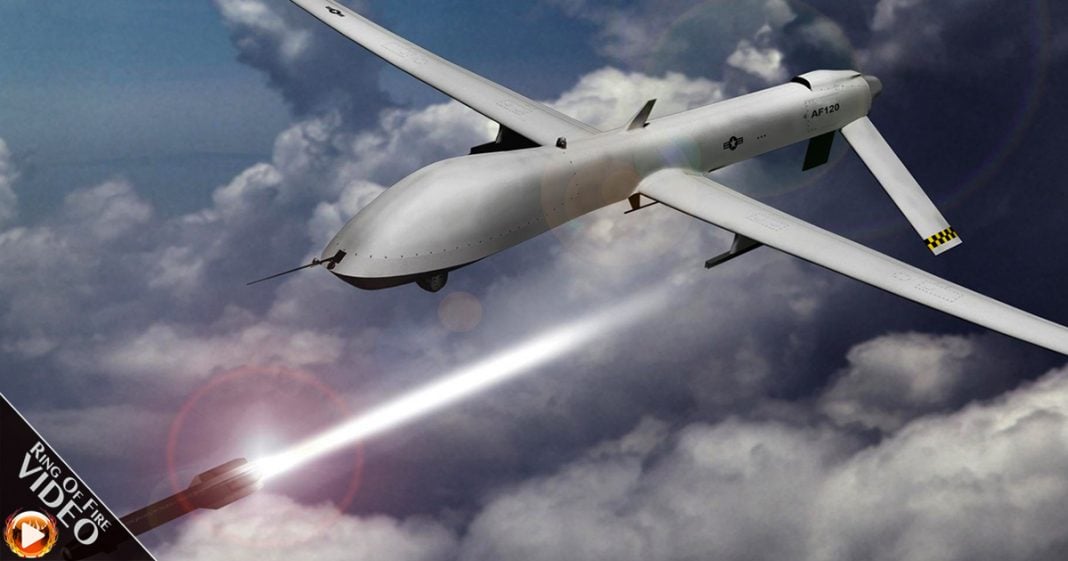 President Obama spent 8 years relying on drones to take out enemies of the United States, often finding himself in a position where he can act unilaterally and without regards for collateral damage. Trump will have those powers at his disposal next month, and given his penchant for retaliating against people, no one will be safe if this man takes office. The Ring of Fire’s Farron Cousins discusses this.

One of the biggest progressive criticisms during the Obama Administration was that President Obama was far too liberal with his use of drone strikes. One of the biggest controversies was the murder of Anwar al-Awlaki who was a US citizen who then became the poster child for Al-Qaeda, several attacks since his death have specifically mentioned his death including the Ohio State crazed person a couple weeks ago who was trying to run people down with his car and stabbing people. He specifically mentioned al-Awlaki in his note, but anyway al-Awlaki taken out by a drone strike ordered by President Obama, big criticism of the Obama Administration.

Now here’s the problem: These drone strikes did start under George W. Bush. Obama greatly expanded them. Now that they are so expansive and so widely used we need to be even more scared because in a month those powers, the power to literally murder US citizens without any charges because al-Awlaki did not have any charges against him yet, that power goes to Donald Trump. We have seen how Donald Trump reacts to a union worker on Twitter retaliating against him. We’ve seen how he reacts to Saturday Night Live on Twitter. This man loves retribution. He loves insults and he loves trying to take people down with his words. What’s going to happen when he literally has the authority to take these people down with drones?

Now I’m not saying that Trump would actually issue a drone strike on American soil. I do not think he would do that but that threat is there. More importantly, Donald Trump would, could, and will issue drone strikes overseas and it doesn’t have to be somebody suspected of terrorism. We’ve seen that with Obama. How many civilians have been killed in the last eight years because of these drone strikes. There’s no real way to single out one person. You got to take out a whole area and that’s why these are so dangerous and that’s why Obama’s been criticized so greatly for using these because they don’t just show up, fly down, and fire one bullet into the bad guy. They’re firing missiles and bombs and killing tons of people, usually more civilians than bad guys. That’s not worth it. Donald Trump is going to have those powers and Donald Trump has a very short fuse and Donald Trump is a little bit unstable.

Again, this comes back to Obama because he could’ve put an end to this. He could’ve scaled it back but he didn’t. He expanded it. The man who won the Nobel Peace Prize, remember? Now he’s hitting those powers off the Donald Trump and that’s just a lesson and be careful because you’re not always going to be the person in charge. I think the Democrats really need to get a handle on that. They’re not always going to be in the White House. Eventually, Republicans will take over and sometimes it’s going to be a really unstable person like Donald Trump, so yeah it’s fun to have those powers when your president but at most you only have eight years.

Now we’re going to have to live through at least four years of a mad man with his hands on those drone buttons, to top it off with the fact that Trump wants to appoint James Mattis to head up the Defense Department. This is a man whose nickname is Mad Dog and who was ousted from his previous position of power because he was too hawkish wanting to go to war with Iran. Donald Trump wants this guy in his administration. Now you put those two together and you’re looking at an international disaster the likes of which we haven’t seen in decades. This is a problem. This is something we have to take seriously. Again, I don’t think Donald Trump’s can use drones to take out the cast of Saturday Night Live but I do think he’s going to do it to try to take out foreign leaders who aren’t very nice to him or people that he just doesn’t like, and that is the most terrifying thing about this upcoming Trump Administration.