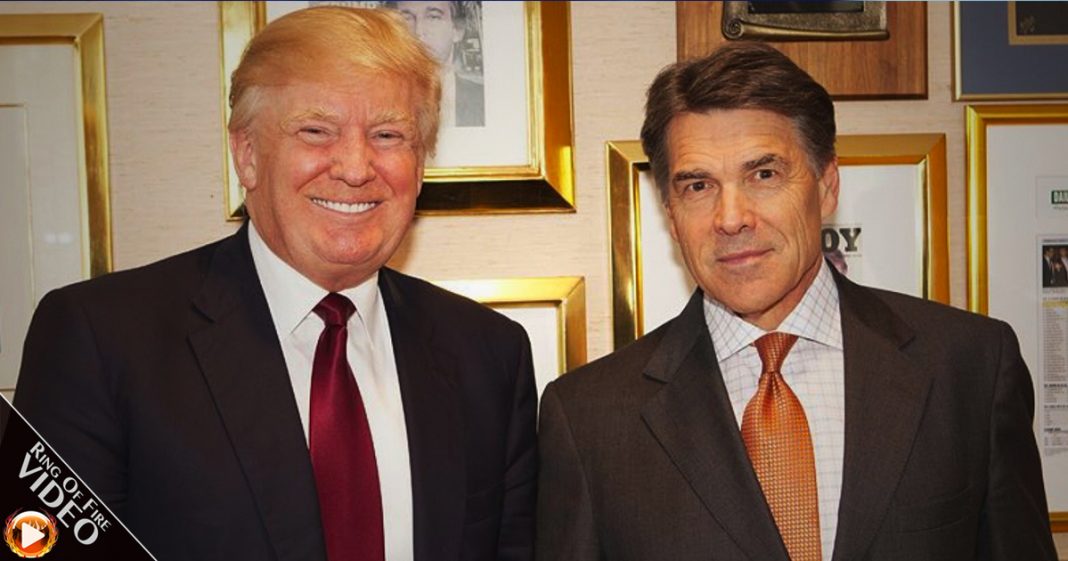 Donald Trump has tapped former Texas Governor Rick Perry to head the Department of Energy, the very agency that Rick Perry couldn’t recall during a 2012 presidential debate, creating one of the biggest campaign gaffes of the last 10 years. The Ring of Fire’s Farron Cousins discusses this.

Farron:
I want everybody to take a minute and remember that this happened.

Rick Perry:
And I will tell you, it’s three agencies of government when I get there that are gone: Commerce, Education, and the … what’s the third one there? Let’s see …

Rick Perry:
Oh, five. Okay, so Commerce, Education, and the …

Rick Perry:
EPA, there you go.

John Harwood:
Seriously, is the EPA the one you were talking about?

Rick Perry:
No, sir. No, sir. We were talking about the agencies of government … The EPA needs to be rebuilt. There’s no doubt about that.

John Harwood:
But you can’t name the third one?

Rick Perry:
The third agency of government I would do away with … Education, the …

Farron:
Now that was Rick Perry attempting to name the three departments within the Federal government that he would get rid of completely if he were ever elected President. The “oops” came about because he couldn’t remember the name of the Department of Energy. Now Donald Trump, in true fashion just like he’s done with every other appointment he’s made, is considering putting Rick Perry in charge of the Department of Energy. A department that not only does he want to cut, but he hates it so much that he can’t even bother to remember its name. Oops.

I mean, look the Department of Energy created one of the greatest campaign gaffs of the last 15 years and now Rick “Oops” Perry is going to be running the Department of Energy. I have actually seen a couple liberals say that, ‘Well, it kinda makes sense because Texas is a big energy producer and he was Governor of Texas, so he knows about …’ No, no, no. Rick Perry doesn’t know about anything. Okay? Let’s get that straight, right off the bat. Rick Perry did not go in and help the energy industry in Texas. He didn’t go in there and really regulate and fine-tune the thing. He just let it run. That’s not intelligence; that’s apathy. There is a big difference between the two. Not to mention the fact that the Department of Energy is also in charge of nuclear research in the United States. Do you really think Rick Perry needs to be in charge of anything close to nuclear power?

This is exactly what we could have expected from Donald Trump, though. If you hate a government agency, if you think a government agency is stupid or worthless or out of date, then you get to run it. This is the most backwards campaign cabinet-picking situation that I’ve probably ever seen, and I think a lot of people agree with me on there. In fact, polls show that the majority of American citizens disagree with how Trump is handling his cabinet picks. A USA Today poll last week shows that the majority are unhappy with what Donald Trump is doing. But Trump, obviously, is immune to polls. He’s immune to public criticism, unless he’s on Twitter. In which case he’ll personally attack you for everything you’ve ever done in your life.