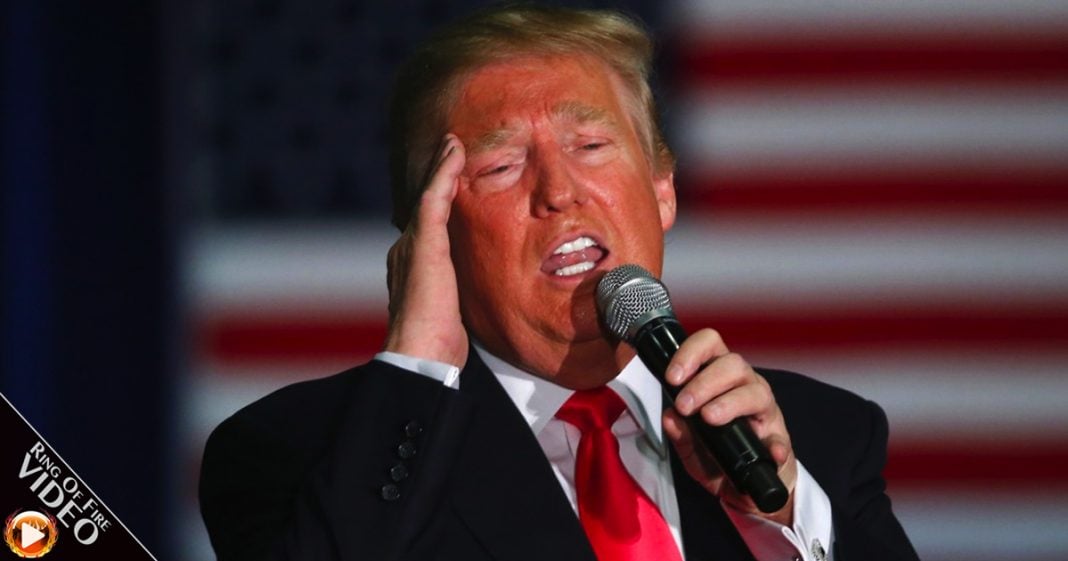 Donald Trump says that the reason he’s missing his intelligence briefings is because he’s a “really smart person,” and he doesn’t have be told the same thing day after day. Perhaps if he attended one of these meetings, he’d understand that intelligence changes on a constant basis. The Ring of Fire’s Farron Cousins discusses this.

Even though the intelligence community has repeatedly called on Donald Trump to please attend your daily presidential intelligence briefings, Donald Trump told Fox News this weekend that look, the reason he doesn’t do this every day, the reason he doesn’t make time for this is because he’s like a real smart guy. Now I wish that I was paraphrasing him there, I wish I was exaggerating, but Donald Trump literally said quote, well before the quote, “he’s like, a real smart [person],” like a real smart guy. First of all, people who are truly intelligent, Donald, don’t go around having to reaffirm that to other people by telling them that they’re a real smart guy. We get it. You’re busy. You got conflicts of interest to handle. You got businesses to run into the ground. You’ve got horrible people to appoint to positions of power in the United States government, but you also have to take this job of President seriously and yeah, that really does involve getting these intelligence briefings every day.

Trump went on to tell us that he doesn’t want to have to sit and listen to the same words over and over again, every single day for the next four, maybe even eight years, God forbid. That’s the thing Donald, if you were attending these briefings every day, you would learn that you’re not actually just hearing the same thing every day. Intelligence changes constantly. Sometimes several times within one day. That’s how the world works, buddy. You’re going to find it out soon enough, hopefully not at the expense of American lives because the last time we had a sitting president who didn’t give a crap about his daily briefings, was with George W. Bush, who in August of 2001, completely ignored the Bin Laden determined to strike within the United States daily briefing, in fact, when the intelligence official or briefer, whoever it was, gave him that memo, Bush said, “Okay, you’ve covered your ass,” and discarded that memo.

Then we had 9/11. Could Bush reading that memo have prevented that? Probably not, but it probably could have made our response time a little faster, right? Regardless, we’ve seen what happens when we have idiot man/child presidents in the Oval Office who ignore presidential daily intelligence briefings. Donald Trump is not a smart man. He is not even a good man. He’s not a good businessman, he’s not a good father, he’s not a good human being, but worst of all, he’s not a smart human being. You could be a jackass, but still be pretty smart. Unfortunately, Donald Trump stops at the being a jackass part.

He needs the advice of people much, much smarter than him. People who are actually paying attention to what’s going on in the world, but Trump is so arrogant, that he thinks he knows better. He thinks he understands the world better than the people who’ve spent their entire life understanding and interpreting the world. This isn’t going to end well, and I hate to constantly have to use that phrase that this isn’t going to end well, but nothing about Trump’s presidency is going to end well, but this particular ignoring intelligence briefings by saying that you’re a real smart guy, that’s not going to end well for anybody. Because if you truly were a smart guy, you’d probably start paying attention to what the smarter guys are desperately trying to tell you.