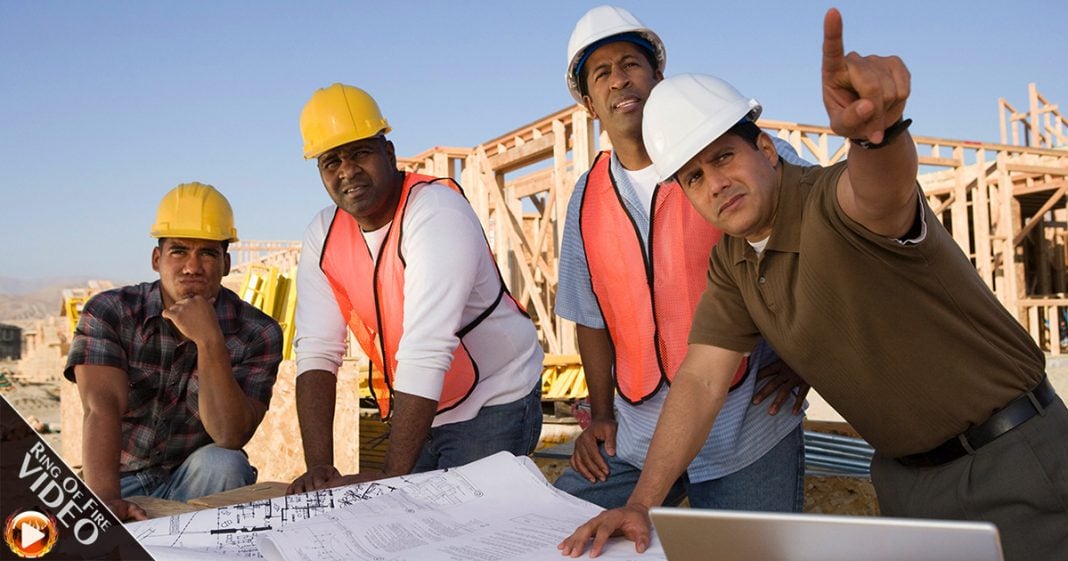 Donald Trump hates unions. Republicans hate unions. Corporations hate unions. But the reality is that American workers need union protections, and the next four years are going to be very difficult for organized labor as it struggles to survive in such a hostile country. The Ring of Fire’s Farron Cousins discusses this.

Organized labor has been suffering since the 1980s when Ronald Reagan came out and decided that he was going to fight against labor unions as a central part of his administration. During that time, union membership fell dramatically in the United States. Employers were embolden to destroy unions, right to work laws started to take shape, which they took even greater shape during the 90s and the 2000s, now we have states where you’re not even allowed to form a union. Union membership is at an all-time low in the United States, and guess what else is at an all-time low in the United States? The size of the middle class.

When Reagan came in and killed the unions, he also killed the middle class. Ever since then the middle class has been losing ground. Without that union representation, without those unions fighting for them, the middle class has lost ground, wages have either stagnated or decreased, benefits have decreased, and that’s all because the unions weren’t allowed to fight for them anymore. Study after study has proven the fact that unions not only help the workers that they represent, but they raise wages for the entire area where they’re located. In industries, and companies where they’re not even at.

That happens because businesses have to stay competitive. A company paying pennies on the dollar compared to what a union company is paying, is not going to retain their employees. They’re all going to leave company A, and go to company B with that union. The wages everywhere have to go up. That’s what unions do. As bad as things have been for unions over the last 30 years, 40 years, they’re about to get much, much worse. In fact, under president Donald Trump we could finally see the death of the American Labor Union. That is not an over statement. Trump right now is considering putting this Andrew Puzder as his labor secretary. Puzder is in charge of Carl’s Jr. And Hardy’s, a known anti-labor company.

Trump himself has had many labor disputes with his workers always sighting against the unions, trying to make their life just a little worse. Trump, together with Puzder, would create an environment for American workers that looks more like a Saipan sweatshop factory. They’re going to lose their union protections, they could in fact lose their minimum wage if Trump decides to do away with the federal minimum wage, which he very well could. They’re going to lose benefits. They could lose their company sponsored health insurance, and if the republican’s succeed no repealing Obama Care, they may not be able to get health insurance.

Everything trickles down in a situation like this. See, when Ronald Reagan talked about trickle down, he meant giving more money to rich people, and then they’d spend it and a little bit would flow down to the rest of the people. That’s not how trickle down works. How trickle down works is like this. You kill a union, wages go down, economic activity in that area goes down, benefits go down, health insurance coverage goes down, people start to die. That’s trickle down. When one decision effects everything else that happens from that point forward. That’s what Reagan did, that’s what Bush Sr. did, that’s what Bush Jr. did, and Donald Trump is going to do it, the likes of which we have never seen.

The labor movement needs help. You may not a member of a union, you may not have a family member that’s a member of the union. If you have a job, if you work, you can thank a union member for at least providing some form of protection for your industry, because that’s what they have done for decades in the United States. We have to make sure that they survive the Trump administration, and then when the next administration comes in, they need to return to power. When unions are powerful, the middle class is stronger. The United States is better. You want to make America great again? Let’s get upwards of 80% to 100% union membership in the United States. That will make this country great again.