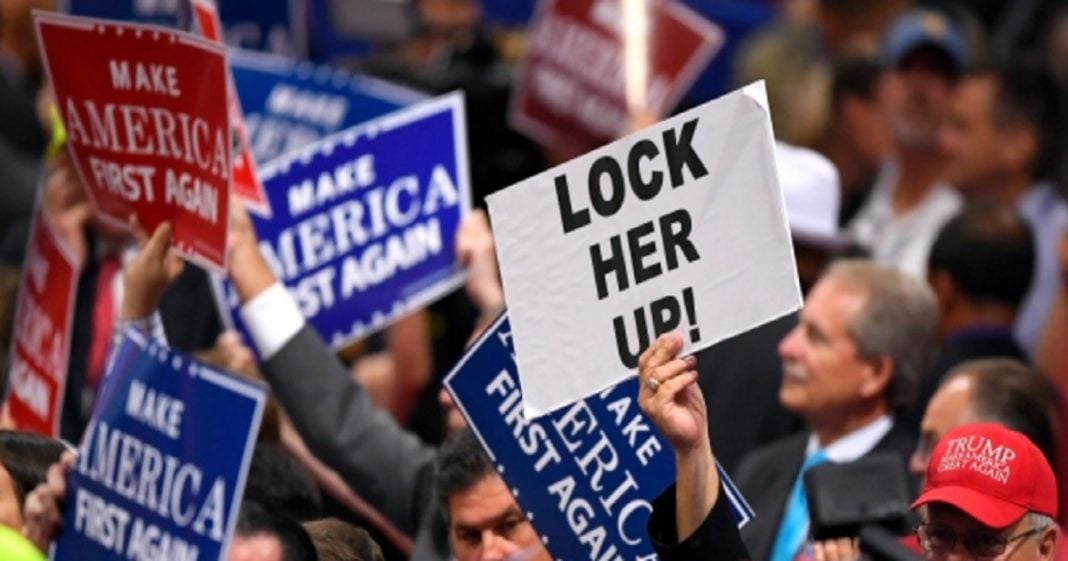 During Donald Trump’s so-called “Thank You” tour, a lot of his supporters are learning an awful lot about the real Trump as he repeatedly disappoints and reneges on promises made to roaring crowds.

During the most recent leg in his preposterous tour on Friday, his adoring fans launched into their favorite chant. No, not “U-S-A.” Expecting to be praised by their leader, the crowd of Trumpkins chanted “Lock her up!” But rather than being praised, Trump turned on the crowds he had previously encouraged and told them that what they believed was a lie.

“No, it’s okay. Forget it. That plays great before the election. Now, we don’t care, right?”

Of course most of Trump’s supporters do care about Clinton’s crimes and truly believed that their orange demi-God would do what he said and appoint a special prosecutor to investigate Clinton and ultimately ‘lock her up.’ But as we’ve already come to know just a month after the election, nothing Trump promised will likely come to pass.

That is what is so interesting about the Trump con – despite his gigantic wealth and years of corruption, he was able to convince millions that he was on their side. Then, now that he has everything he wants, he openly admits that he lied to their faces to get what he wanted.

Trump has already made it clear that his promise to jail Clinton was completely for show, as immediately after his win he praised his former opponent and then later said that he didn’t want to cause her or her family any trouble. Just like that, Trump destroyed the main reason that many people supported him – but don’t expect them to admit it to you.

As he stocks his cabinet with Goldman Sachs executives and appoints the most corrupt insider cronies in his administration, the level of disappointment Trump supporters feel will only grow.

They got played by the nation’s most obvious con-man, and their ignorance will cost us everything.