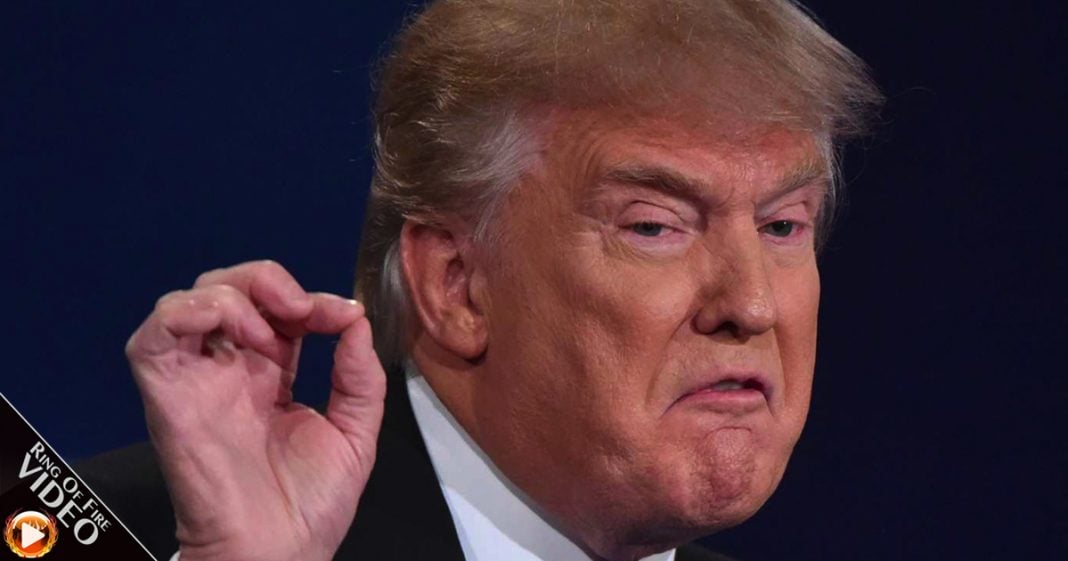 Sure, American voters are easily manipulated, but Donald Trump was clearly a con man from the start of his campaign, so how did so many fall for his ridiculous promises? The Ring of Fire’s Farron Cousins discusses this.

Donald Trump is a conman. That is basically the easiest way to describe Donald Trump, the human being, and a lot of people knew this. We knew as soon as he announced his run for President every horrible con he pulled off on the American public in the past, Trump University, Trump Steaks, how he screwed over all his workers. The man did everything possible to make a few extra dollars at the expense of everyone else regardless of the fact that he was delivering shoddy products and lies. We knew that. A lot of the American public knew it. A lot of Trump supporters understood that fact, but they still voted for him.

The question is, why did so many Americans fall for this Donald Trump con? Think about this. I know we’ve talked about the racism and the sexism, and yes, that played a huge role. Hillary Clinton’s lack of talking about the issues played a role in people going to Trump, but why were they so desperate that they would fall for such obvious lies? We have a real problem in the United States, not as intense as the racism and the sexism, but there is a psychological problem with people in the United States, and that problem is that we’re always trying to find the hero. We have a very severe and almost borderline disgusting case of hero worship in the United States. We’re desperate to find anyone who says something that could indicate that they might do something that could possibly help our current situation.

Donald Trump understood that. That is one of the first traits of a conman is psychological manipulation, and that’s what he did with a lot of this country. He promised them these great things that they didn’t even know that they wanted, like a wall between US and Mexico, because he found out that people who are unhappy about their situation are desperate for somebody to blame and desperate for somebody to come along and say that they’re going to fix it. Hero worship and blame. That’s what we’re looking at right now with the American psyche. Maybe the Midwesterner whose job got cut because his company moved overseas, maybe Trump convinced him that if we build that wall between us and Mexico your job’s coming back. It’s the Mexicans that stole your job. Has nothing to do with the fact that your industry simply went out of business due to a lack of demand, due to basic economics. No, no, no, no, no, no, no, no. It’s somebody else is to blame. Put your faith in me, and I’ll make it better.

That’s what happened because Americans wanted that hero, that unsung outsider establishment political vigilante to swoop in and save the day, and they were desperate for it. That’s why a lot of Republicans go back and look at Ronald Reagan and say, ‘What a great man. He was amazing. He was awesome.’ It’s false hero worship. Reagan was terrible. There is no way to say that Reagan was a good President. He killed unions, Iran Contra. Good God, the economy went into recessions constantly during his tenure, but Republicans don’t see that. They see him as just this average guy who came in and, golly gee, he did a great job, he’s a hero.

No, he’s not. He is not. Just like Donald Trump is not, and we’ve seen it because once a conman gets what they want, the con is over, and they can do whatever they want. That’s what happened with Donald Trump the second the election was over. All those promises to drain the swamp, it turns out he’s picking the worst people from that swamp to run his administration, and suddenly the public, Trump voters, not the whole public, only the people dumb enough to vote for Donald Trump, are like, “Oh my God. I, I, I, I have made a huge mistake,” and you did. You were conned because you were desperate.

That’s not necessarily your fault, and this is where the Democrats need to come in and explain what that party stands for. If they were to actually go out there and talk to these people who were desperate for a hero, these people would understand that the Democratic party does represent them. They are fighting for them or at least they used to. Today, it’s almost hard to distinguish between a Democrat and Republican, but four years ago, eight years ago, if we would have done that, we would have beat Donald Trump before he even entered the race. He probably wouldn’t have entered the race.

People are desperate for somebody to come along and make their lives a little better. They want that hero. The Democratic party could have been that hero, but instead, they let conman Trump come in and fool millions of voters whose lives are going to be much, much worse in the next four years because the Democratic party didn’t do anything to prevent it.