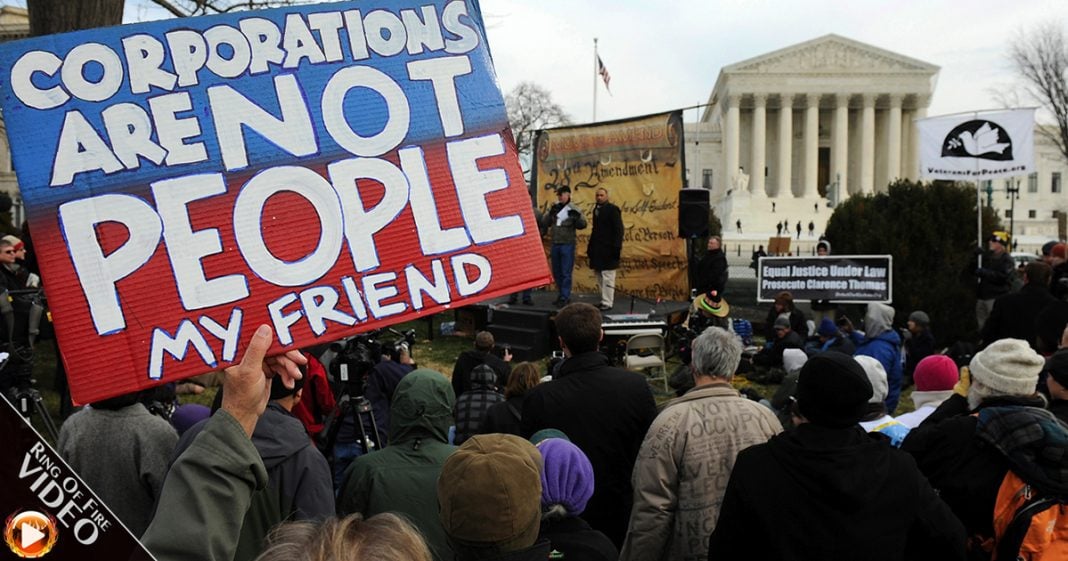 Prior to the Supreme Court’s decision in the Citizens United case, the top donors to the Democratic Party were trial lawyers and labor unions – two groups who fight for consumer and worker rights. After the ruling, its finance, healthcare, and telecom companies that own the party, and the shift in ideology has been glaringly obvious. The Ring of Fire’s Farron Cousins discusses this.

There’s no question that the Supreme Court’s ruling in the Citizens United case that essentially allowed for unlimited corporate money into our federal election system has been one of the worst Supreme Court decisions this millennia, but here’s something that I don’t think a lot of people have thought about. That decision obviously was handed down in 2010 and it hurt the Democratic party more than it hurt the Republican party. Now here me out on this. Before Citizens United all of us involved in the progressive media always talked about how the money in politics influenced and corrupted the Republican party.

The time John Boehner back in the late ’90s handed out checks from the tobacco industry on the house floor to Republican members right before the house was about to take a vote on tobacco legislation. Corrupting. That Halliburton money that fueled George W. Bush and Dick Cheney’s election, the Enron money. Corrupting, lead to the Iraq War. Republicans always did this. They always let the money influence them and that’s what happened all the way back in the ’80s and ’70s with the Republican party. But for the Democrats during most of that time, they were still pretty liberal. You know, we got the Affordable Care Act right after Citizens United was decided up by the Supreme Court but it was already in motion before that.

Since Citizens United, you know who the biggest funders of the Democratic party are now? The finance industry, the communications industry, it’s big telecoms, and the health care industry. That includes big pharma and health insurers. Trial lawyers, unions, they’re now numbers six and seven on the top donors for the Democratic party. That shows you where the party’s loyalty lies. It no longer lies with consumers, with workers, with injured parties who have a grievance against corporations who destroyed their lives. No, their loyalty is to Wall Street. Their loyalty it to AT&T and companies that illegally spy on us with government contracts. Their loyalty is with the health care industry. Not with the people anymore.

The numbers prove it. The timing proves it. The Democratic party lost its soul when the Supreme Court handed down that Citizens United ruling, and that ruling hurt the Democrats far more than it hurt Republicans. Republicans just kept doing business as usual. It’s the Democrats that took a sharp corporatist turn when that ruling was finalized.