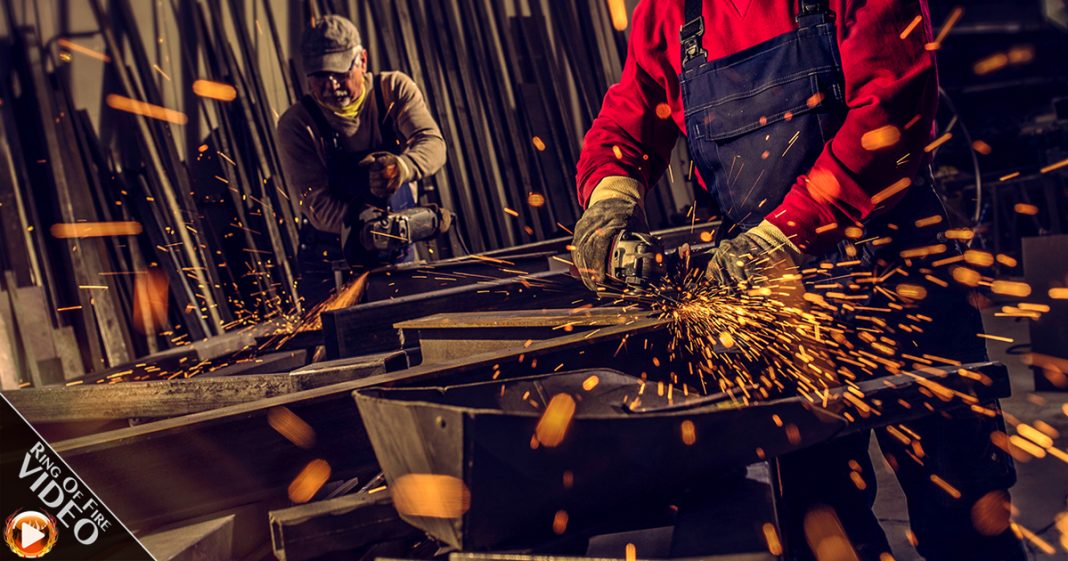 Republicans in Washington must not have been paying attention to Trump’s promise to “buy American” for American infrastructure projects, because they just stripped language from a water infrastructure bill that would have required these projects to be built with American steel. The Ring of Fire’s Farron Cousins discusses this.

Donald Trump ran his campaign on the promise that he was going to bring back American manufacturing jobs. Now, any of us paying attention understood that this was obviously a lie, as Donald Trump himself doesn’t even use American labor for his own products. However, it was a con, but it fooled a lot of people in middle America who were worried about their job security, so they elected Donald Trump based on that. Apparently, Republicans in Washington D.C. didn’t pay attention to this election, because earlier this week, they stripped a provision from a water resources infrastructure bill that would have forced any project for water infrastructure rebuilding and repair funded by the federal government to use American-made steel. Steel made by American workers, on American soil, and the government was going to pay them for that, and the money was going to stay right here in the United States. Republicans said, ‘Screw that. We can get a much better deal if we just buy stuff from overseas and ship it over. Yeah, the quality is worse, but hey, we’re saving money, right?’

That’s what republicans did this week. They stripped the buy American provision from the water infrastructure bill because they don’t care about American jobs. They don’t care about the American economy. They care about saving a few dollars here and there. Dollars that aren’t even theirs. It’s not like they get to keep the money they save, so what’s the big deal? There is literally no downside to buying American steel with these projects that are funded with tax dollars, with our money. I don’t know about you, but I want to keep that money here in the United States. I want to keep American workers working. Those are American manufacturing jobs that we could be saving, that we could be protecting with this language in this bill, and republicans again just said, ‘No, we don’t need that. Who cares about American workers, right?’

Ironically, this is not even the first time that they have stripped a buy American provision from a bill. They did it several years ago at the behest of the US Chamber of Commerce. This is a pattern. Republicans are exhibiting a pattern of hatred and hostility towards American workers, towards American manufacturing, and to be honest, towards the American economy. I hope, I hope, I hope that workers in the Midwest, and all these red states that voted for Donald Trump are paying attention. I know you’re probably not, but please god pay attention and get educated. Get educated about who actually cares about you, and who’s got your back. You can see just this week that it ain’t republicans. They’re not the ones out there looking out for your job. They’re not the ones out there fighting for you to force the federal government to buy American. They are literally doing the opposite. It’s the union leaders, who most of them are liberal, who are out there fighting for you, and you consistently vote against them, and vote in favor of republicans who would gladly ship your jobs overseas for a hot dog, if they could learn.

We only have two years until the mid-terms. You can flip the House, you can flip the Senate. You can get these anti-American republicans, because that is what they are, out of Washington. To be perfectly honest, you can’t get any more un-American than by stripping a buy American provision from a bill in Washington.