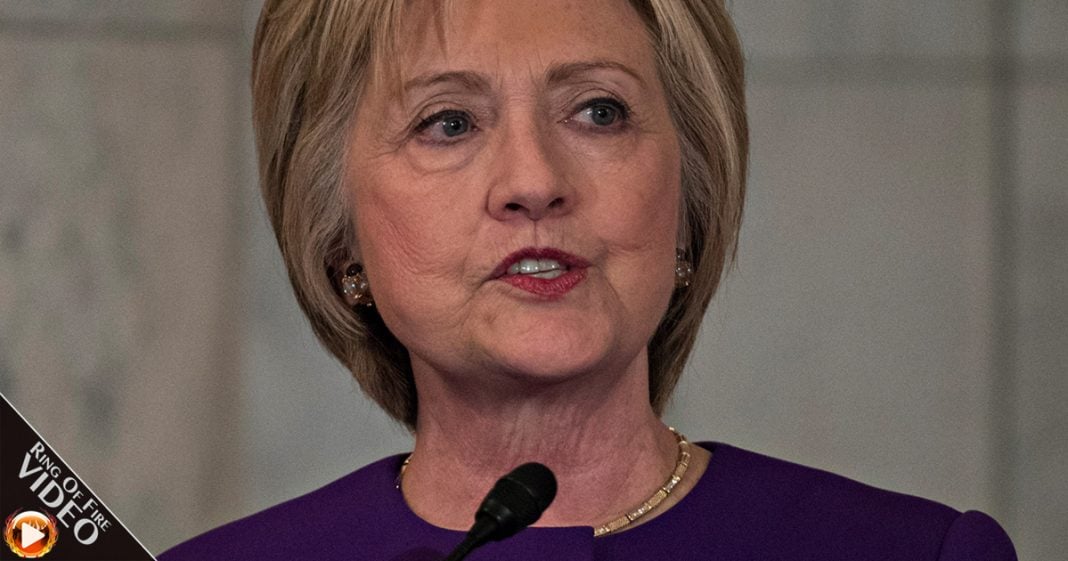 Hillary Clinton emerged yesterday to pay tribute to Harry Reid, and to take a few shots at the “fake news” epidemic in America. But, as usual, she made it all about her by attacking Russia instead of the right wing psychopaths who follow sites like Breitbart. The Ring of Fire’s Farron Cousins discusses this.

Hillary Clinton emerged yesterday after almost a month of essentially disappearing from the public spotlight minus, as she called, talking selfies in the woods. However, she appeared at a tribute for Harry Reid, who is retiring after about 30 years in the Senate, a little too late for him. He should’ve retired long ago. Regardless, Hillary Clinton shows up at this tribute, gives a speech paying tribute to Harry Reid. She also takes a dig at the fake news epidemic that has encompassed the United States, which I have to applaud her for, but only minimally, because immediately after talking about the problem of fake news, Hillary Clinton went into her own fake news conspiracy theories about why we’ve got to rein in this fake news. Rather than talking about right-wing psychopaths like Breitbart, or Townhall, or even Fox News, no, Hillary Clinton went in and started attacking Russia.

Hillary Clinton has taken this fake news fiasco, something that almost cost people their lives, and she’s already made it all about her. She’s making it about her loss in the 2016 election. She’s still blaming Russia for aiding Donald Trump and somehow hurting her. She’s blaming these fake news sites where they spread the lies about her being ill, or possibly having a brain injury, or losing her mind in some way or another. That’s what Hillary Clinton is mad about, and that’s why Hillary Clinton thinks we need to do something now. Has nothing to do with the guy that went and shot up Comet Ping Pong pizzeria. No, no, no. It’s all about Hillary’s election loss, and that is sickening.

We have to do something about the problem of fake news in the United States, but it has nothing to do with Russia. Look, here’s the thing about this Russia story, which is just about as fake news as you can get. CNN, Washington Post, and all of the other corporate-controlled news in the United States has said that there are two studies that link Russia to some of the email hacks or whatever happened with the DNC. They are absolutely behind it. We know that because of these two studies. Well first of all, one of the studies is by an anonymous group, so we don’t know who it is. That’s not evidence. That wouldn’t be admissible in court. It’s not admissible now. Your evidence falls flat.

The other is from a group that may as well be anonymous, because I have never heard of them, and I’ve been doing this for over 12 years, researching, reaching out to these organizations on a daily basis. If I haven’t heard of you by now, if nobody else has heard of you, if you just formed to make this one little study, yeah, it’s probably not true, and these studies actually provide no evidence to speak of that ties the Russian government into the election hacks, anything that cost Hillary Clinton the election. These two bogus studies don’t even lay that out. The Kremlin, Russian government, whatever you want to call it, right now, there is absolutely no available evidence to show that the Russian government was involved in interfering with the United States 2016 presidential election, but Hillary Clinton is still out there pushing that fake news story.

Now, if evidence emerges that shows that Russia was somehow involved, okay. We’ll talk about it. We need to do something about that, but until you have evidence, you can’t get out there and spout these lies, because Hillary Clinton, that makes you just as bad as Breitbart, because you’re trying to start a new Cold War that nobody else, other than aging corporatist Democrats in Washington DC, want to get involved in. You’re eating the sour grapes of election loss. You’re blaming everyone and everything else other than yourself for this, and you’re downplaying a huge problem in the United States, and that is the epidemic of fake news. That is the right-wing psychopath who went into that pizzeria and shot up the place, almost killed people. That’s what matters, Hillary. Not what happened to you. Not your trying to blame everybody but yourself for this, and that’s exactly what she did in her speech. She made this about her instead of using this as an opportunity to go out there and attack the real issues.