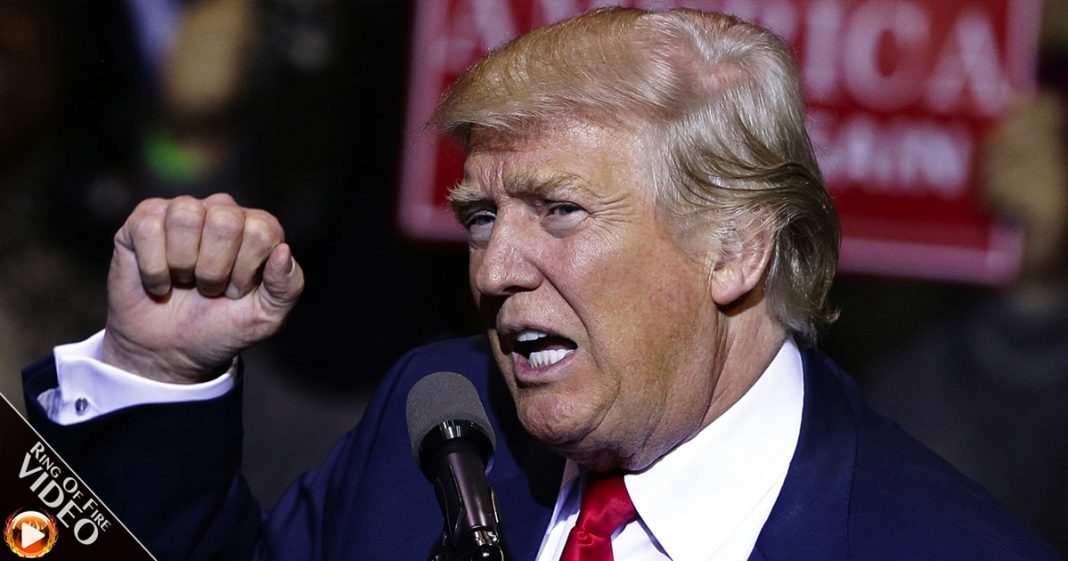 Donald Trump’s attacks against the union leader for Carrier are just the tip of the iceberg for what he could do once he actually takes office. The man could shut down all dissent, including independent progressive media outlets if he chooses, and that’s a terrifying thought. The Ring of Fire’s Farron Cousins discusses this.

Earlier this week, Chuck Jones, the President of the United Steelworkers 1099 Union, came out and criticized Donald Trump for absolutely fabricating the story of the Carrier air conditioning plant and saving all these jobs and making things so great, a deal-making process in which the unions were actually cut out. Turns out the real deal’s going to ship most of the jobs to Mexico and pretty much screw over the remaining workers.

Chuck Jones, President of the Steelworkers Union went to Twitter and began talking about the fact that yeah, Donald Trump wasn’t completely forthright with that deal, and therefore, we need to look at it a little bit more skeptically. He wasn’t being a jackass about it. He was just telling us the facts.

The President-elect, Donald Trump, does what he does best. He got on his Twitter and began essentially cyber-bullying Jones to shut down this dissent. Let’s think about it this way. Donald Trump is about to become the President of the United States. Chuck Jones, he’s the president of a union. The power that these two individuals hold is not even comparable. Jones is essentially just an average citizen. Donald Trump is about to be the most powerful human being in the world. Yet, this person, Donald Trump, has such thin skin that he felt it necessary to get on Twitter and attack this man for literally saying the truth. Donald Trump can’t handle that, so he got on Twitter, trying to shut him down and most ironically told him, ‘Maybe you should spend less time tweeting and more time working.’ This, coming from a man who’s skipping his intelligence briefings and literally not doing his job and spending all of his time on Twitter.

Donald Trump hates dissent, and that’s what’s very scary. Like I said, he’s about to be the most powerful human being in the world. He will have the power, and I guarantee you he’s going to try to use it, to shut down dissent in the United States. That includes independent progressive media outlets that are critical of him. We have seen, time and time again, during his campaign and during this transition, that Donald Trump can not take any form of criticism. He is a weak-willed sissy and can not handle it, so he’s going to do what he can.

That would, if he were to attempt to shut down dissent or shut down any kind of progressive media sites that criticize him, that would go against the First Amendment. However, he could do it long enough before it goes through the court systems where they’re able to strike it down, unless he gets his court appointment through on the Supreme Court, and they decide to uphold something like that.

Those lists going around made by individual yahoos here and there that actually have no credibility whatsoever, they’re still there. They’re saying like this site, Raw Story, crooks and liars. Even Ring of Fire. Yeah, these are propaganda sites. They should be shut down. The Young Turks. They’re a propaganda site. They should be shut down. This doesn’t make any sense, okay? None of these people have any credibility to speak of, yet people are actually looking at these lists that they’ve created as if they hold some kind of bearing. It’s really sad that people would do that, but what’s even sadder is that Donald Trump is the kind of guy who would do that. His ego is so fragile, he would take any opportunity to shut down dissent. That’s what we saw earlier this week with Chuck Jones.

That’s why in these coming years, the progressive media is going to be so important. We have to continue doing this no matter what Donald Trump threatens. If you get on Twitter and Donald Trump has personally attacked you, then you’re doing something right. Dissent at this point is all we have. It’s what we have to continue to do during these next four years until we can get this idiot out of office and start fixing the mess that he has already created in Washington DC. If he attempts to shut down dissent of any kind like he is right now with the cyber-bullying, we will fight back. We will come back stronger than ever if he starts to attack us. That goes for any other progressive media site or outlet or person or individual or union president or environmentalist or activist of any kind. Trump will not shut anyone down because the second he attempts to, you’re going to have all of the rest of us right there behind them to back them up.