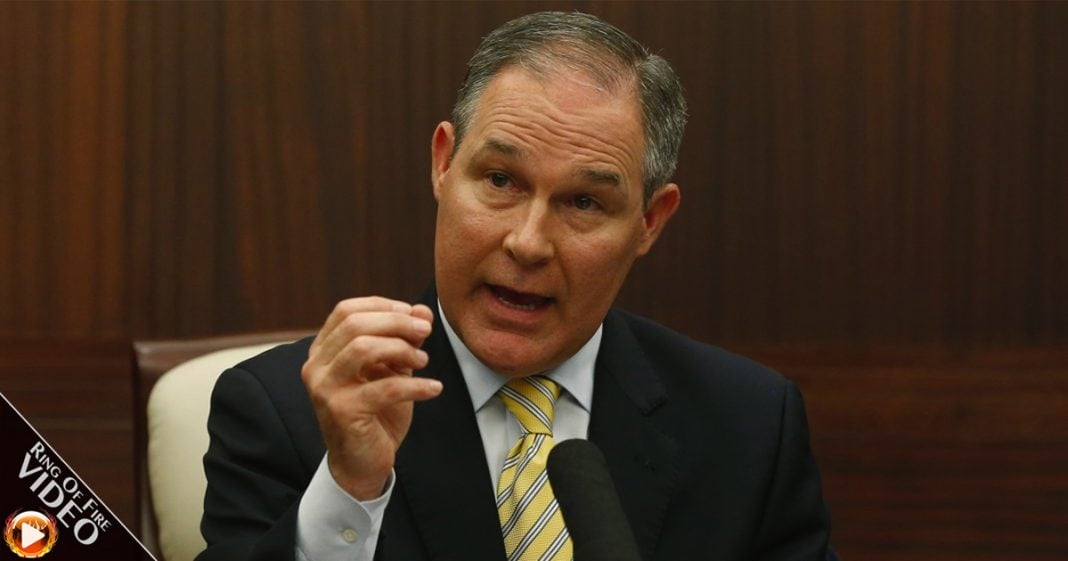 Donald Trump has chosen Scott Pruitt, the Attorney General of Oklahoma and a noted climate change denier, to run the Environmental Protection Agency. This will mean a significant roll back of environmental protections that will not only harm the environment, but it will also endanger our lives with increased pollution and climate threats. The Ring of Fire’s Farron Cousins discusses this.

Donald Trump has picked Scott Pruitt, the attorney general of the state of Oklahoma, to head the EPA in the new Trump administration. Just like every other appointment Donald Trump has made, he’s picked someone who is grossly unqualified and downright dangerous for a cabinet position. Pruitt, in case anybody wasn’t aware at this point, is a firm climate change denier. He believes that the science behind the issue is certainly not settled and that there’s really no proof that climate change is even a thing.

Pruitt, as attorney general of Oklahoma, has been leading the charge to sue the Obama administration over the Environmental Protection Agency’s clean power rules, which aim to reduce carbon pollution in the atmosphere. Trump has picked a guy who hates the EPA, who wants to destroy EPA regulations, to run the EPA. I know the whole euphemism of the fox guarding the hen house gets overplayed a lot, but this is the exact same thing. This is what Republicans do.

The entire foundation of the Republican party is built around small government. We’re electing people that legitimately tell us they want to destroy the government, make it smaller, cut it in half. That’s like getting hired on at a business and during the interview you tell them, ‘You know what the problem with your business is? Your business. I want to cut it in half. I want to fire half the people here and that’s how we’re going to make this business work.’ You wouldn’t hire somebody to work at your company who says that during an interview, so why do we keep hiring Republicans to run our country?

This Pruitt character is a danger. Not only to the environment but to people. Look, as the attorney general of Oklahoma and as a human being, who I’m assuming has the capability to read, he has certainly seen the studies from the state of Oklahoma showing that fracking, in Oklahoma, is linked to increased intensity and frequency of earthquakes in that state. We know he knows that. He’s not completely foolish, at least I don’t think. He’s choosing to be ignorant, and that’s what climate change deniers really are. They’re making a conscious choice to be ignorant about an issue, only to benefit the fossil fuel industry.

When Pruitt comes to Washington, he is going to, essentially, dismantle the Environmental Protection Agency. The very few things that President Obama had done to protect the environment were all done through the EPA and Pruitt is going to get in there and dismantle all of those regulations. And why? One, because, like we said, he is owned by the fossil fuel industry. He denies climate change, but more importantly because he, like so many other Republicans before him, are under this false belief that regulations hurt American jobs. When every available study actually shows us that regulations actually create jobs in the United States. They’re good for the economy. They’re good for the environment. They’re good for public health. Regulations save lives, create jobs, and generate economic revenue.

Where’s the downside? Unless you own a fossil fuel company that now has to spend a couple extra dollars to reduce your carbon emissions, there is no downside for 99.9999% of the American public. I’d say that that should outweigh the needs of a fossil fuel CEO. Donald Trump doesn’t think so. Scott Pruitt, certainly, doesn’t think so. We’re going to see four years of rolling back environmental protections, companies polluting more, getting away with it because the EPA is going to let them do it, and the only people that are going to suffer, as usual, are the 99%.