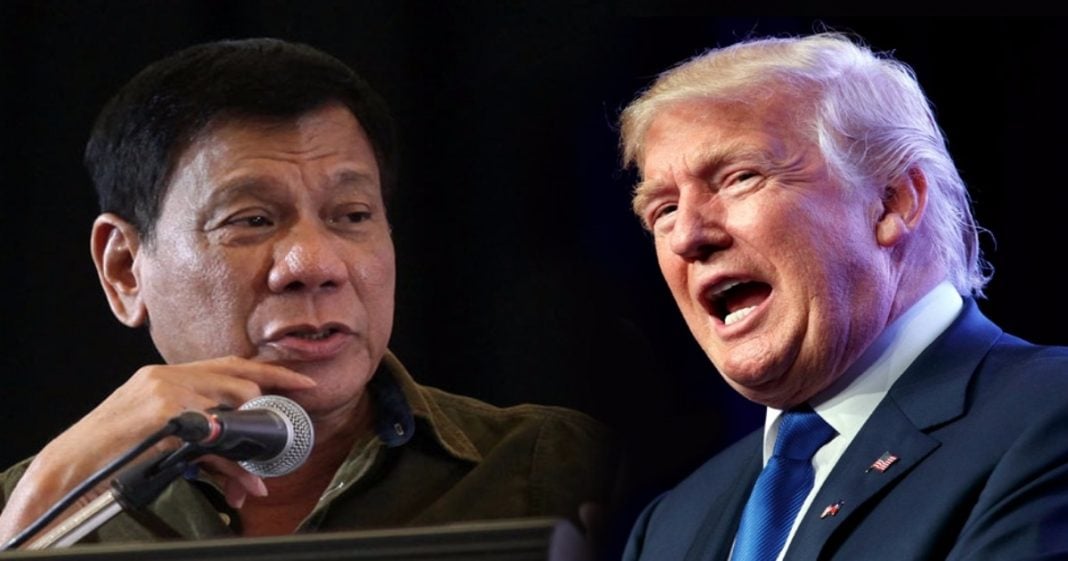 After years of strained relations with the U.S., Philippine President Rodrigo Duterte is suddenly very keen on being friends now that we’re looking at a Trump Administration.

In stark contrast to the condemnation from President Obama, in a recent telephone conversation, Trump reportedly told Duterte that the U.S. and the Philippines should “fix our bad relations,” adding, “You’re doing great!”

To what is Trump referring? According to Duterte, Trump is very impressed with his crackdown on the illegal drug trade in his country. That crackdown has resulted in more that 1,400 murders over an 18-year period since 1998. Most of those victims were not drug dealers; they were drug users, petty thieves, and children. Although the Ombudsman of the Philippines found “no evidence” that Duterte was directly involved with those killings, Duterte himself has been openly supportive of the extrajudicial killing of drug users and other suspected criminals by self-appointed vigilantes.

Duterte has been a figure in Philippine politics for years, having served two terms of Davao City, the country’s third-largest city. He was elected president of the Philippines last summer on promises to “get tough on crime” by simply killing criminals by the tens of thousands. According to human rights experts from the U.N., those extrajudicial killings by vigilante groups have increased since he took office. (Duterte’s response to that criticism was to threaten to leave the U.N.)

It gets even more interesting: during his campaign, Duterte referred to an event that took place during his tenure as Mayor of Davao City in which an Australian missionary named Jacqueline Hamill was gang raped and murdered.

His comment: “She was so beautiful, I think the mayor should have been first.”

Of course, Trump hasn’t gone that far in his sexist, misogynistic comments – but it’s telling that “the Donald” would want to cozy up to such a monster. After all, we are judged by the company we keep.

Trump is also interested in learning more about how Duterte handles his critics as well as the media. Considering how “Trumplethinskin” has reacted to those who criticize and make fun of him so far, the idea of having a little tête-a-tête with the likes of Duterte should give us all pause.

Duterte’s new desire to be good buddies with the Trump Administration is a stark contrast to his past reactions to President Obama. When Obama and the U.S. State Department raised human rights concerns about the way he was dealing with his country’s illegal drug trade, Duterte went on a rant in which he told Obama to “go to hell.” Now, Duterte’s got a kindred spirit who (barring a miracle) will be occupying the White House come January, and who is wishing him all the luck in the world on his own “War on Drugs.”

Given the people with whom Trump is surrounding himself, this is disturbing. Although the U.S. “War on Drugs” has not been as horrific as Duterte’s, it has managed to destroy thousands of lives while accomplishing very little toward addressing the problem of drug addiction. Over a hundred years ago, a physician named William S. Halsted concluded that drug addiction was a disease that required treatment – not a moral failing calling for draconian punishment.

If Trump’s admiration for Duterte and his pick for Attorney General is any indication, we’re looking at a dangerous regression in drug policy that could cause the U.S. prison population to explode even more (and not coincidentally, become a real windfall for the private, for-profit prison industry).