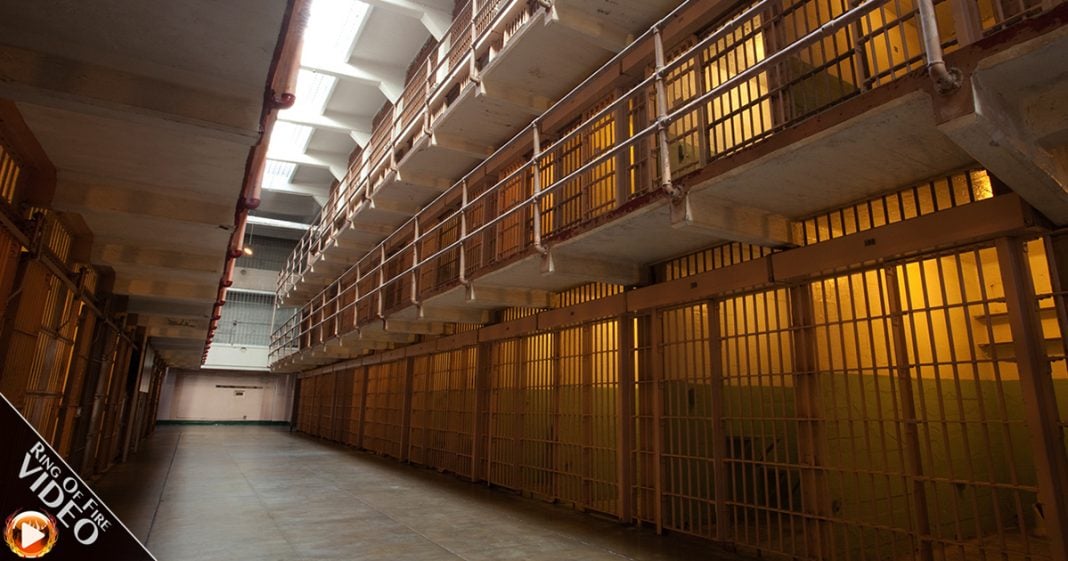 This past summer, the DOJ announced that they were going to end the use of private prisons for government detainees. Apparently the Department of Homeland Security didn’t get the memo, and they are preparing to ship all of Donald Trump’s deportees to private prisons, and the industry is more than happy to be of service. The Ring of Fire’s Farron Cousins discusses this.

This past summer the Department of Justice told us that they were going to stop using private prison for any kind of federal detainee, whether it was immigration, whether it was possibly somebody who was suspect of being an aid to terrorism. The Department of Justice said, ‘Look, we’re done with this whole private prison industrial complex’. Apparently, the Department of Homeland Security, though, didn’t get that memo because they have made the decision that they’re going to start shipping illegal immigrants that need to be deported over to these private prisons. You know who’s very excited about that? The CEOs who run private prisons. Stock in private prisons has risen dramatically since the election of Donald Trump because these people understand that once Trump takes office if he stays true to his promise about deporting 11 million people, you don’t just round somebody up, drive them to the border, and kick them out of your car. No, no, no, no. For many, many months and some cases a year or more, they go to these prisons, these holding centers and since the holding centers in the United States are pretty much packed to the brim, they have already started using private prisons to hold illegal immigrants while their paperwork goes through, while they’re awaiting their hearings, everything like that. The private prison industry makes a ton of money off of immigration.

To be honest, that’s one group that does not want Donald Trump to build a wall. If fewer people come over here illegally, it’s going to be fewer people in their prison and that’s one of the groups fighting so hard to keep drugs like marijuana scheduled as a schedule one alongside heroin because the more people that get arrested for those little things, the more people that go over to the private prisons, the more money those private prisons get from the federal government. It is a chain reaction. Private prisons want the crime rate in the United States to stay high. They want illegal immigrants to continue flowing over our borders as Republicans like to tell us. They want people to break the law. The Justice Department a couple months ago had a good sense to say you know what, ‘We’re not going to do that anymore’.

These private prisons are rampant with fraud, corruption, and abuse and I mean that both figuratively and literally. Inmates are more likely to die in a private prison than a federally or state run prison. That is a fact. Three people have died, three immigrants have died in private prisons this year since October 1st only, last two months. Three people have died. They did nothing wrong. They were in the country illegally, but they were doing what they were supposed to do in the prison waiting for their hearings. Died because of the corruption within these private prisons. We, as taxpayers, are paying for that just like we pay for regular prisons.

The Department of Homeland Security’s decision to continue using these prisons falls right in line with what Donald Trump wants to do. These prisons are going to see their stocks double, possibly triple, or even quadruple once Donald Trump gets sworn in because they know that they can expect boatloads, truckloads, buses full of immigrants coming to pack their prisons while the taxpayers, the federal government, keeps sending them money to hold these people who would be better off in a regular detention center or holding center, but because we’re so damn just dysfunctional as a country, we can’t even get those holding facilities cleared out. The private prison industry understands that. They’re looking to make billions and billions of dollars off of Donald Trump’s xenophobia and that should never be allowed in the United States.