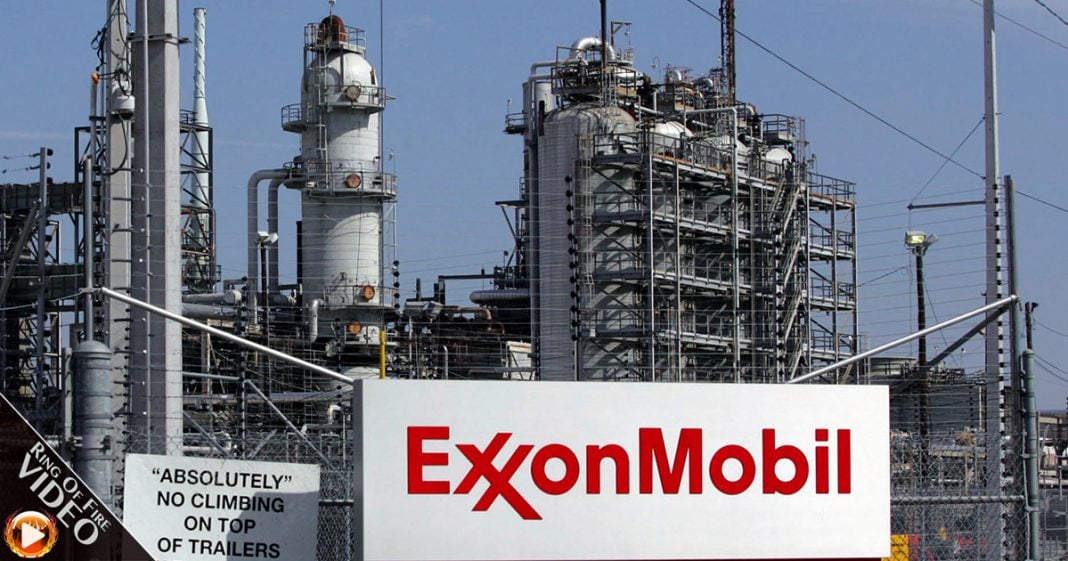 A federal judge in Texas has allowed Exxon to move forward with a lawsuit against several state Attorneys Generals who are suing the company for covering up the dangers of climate change for decades. This move will allow Exxon to further delay the ongoing cases and investigations. The Ring of Fire’s Farron Cousins discusses this.

In case you didn’t know, about a year ago documents were uncovered that showed that ExxonMobil absolutely knew about the dangers of climate change and the dangers of burning oil and how that contributed to climate change at least as early as the 1970s. There’s also evidence that suggest that in the 1940s and ‘50s scientists working at Exxon were concerned about the amount of carbon that burning their product was pumping into the atmosphere.

So as a result of these documents coming to light many State Attorney Generals filed a lawsuit against Exxon for their climate cover-up that lasted well over 40 years. They covered up the science, they funded phony little think tanks to write pieces denying that climate change existed basically for many, many years, well over 43 years, 44 years I believe. They poisoned the public discourse by denying that the thing they discovered even existed, because keep in mind when Exxon discovered the truth about climate change that was more than a decade before Dr. James Hansen from NASA went to Congress to testify about climate change and explain the issue to the public for real for the first time. A decade before that Exxon knew and Exxon covered it up.

Those lawsuits are going pretty well, until a District Judge in the state of Texas recently ruled that, ‘Exxon, you can counter-sue these Attorney Generals in order to put them on the stand under oath to find out why they’re suing you.’ Now, first of all, the Judge in his ruling, Ed Kinkeade, said, ‘Look, there’s no evidence that anything that these prosecutors or these Attorney Generals have done is wrong. This is not politically motivated. They’re not doing anything that’s outside of their jurisdiction or their realm of authority. Everything they’re doing is perfectly fine. There’s nothing wrong with it whatsoever.’

Any reasonable Judge upon ruling that would say, ‘Exxon you have no standing to sue these Attorney Generals. What they’re doing is perfectly fine.’ Not Kinkeade. No. He says, ‘What they’re doing is perfectly fine, but you know Exxon you can ahead, you throw them on the stand under oath and you make them tell you why they’re doing this investigation.’ Even though everybody already knows why they’re doing the investigation. We’re trying to find out how badly Exxon poisoned our planet, and how they covered it up. Who did they pay off in order to keep this hidden? That’s what they want to know. There you go Judge, there you go Exxon, I just answered your questions for us.

The real reason this Judge has allowed Exxon’s lawsuit to go through or continue is because he knows that he’s dealing with a group with essentially infinite money. You cannot fight a group that has more money than anyone on the planet. Exxon pulling in $30 billion to $40 billion every single year, how’s the Federal Government going to continue funding a lawsuit against them? They’re not. Exxon could drag this out indefinitely. Drain the resources on the other side. This is a common tactic among these big-money companies that get sued all the time. The counter-suits to drag it out, to slow the investigation and drain the resources on the other side, that’s what they’re trying to do here. In all fairness, it should be illegal, because this Judge even admitted there is absolutely no evidence that these prosecutors have done anything wrong in their investigation of Exxon, but he’s still letting Exxon go forward with it. Of course, obviously Judge in Texas, it’s about what we’ve come to expect from Judges in Texas, but this is sickening.