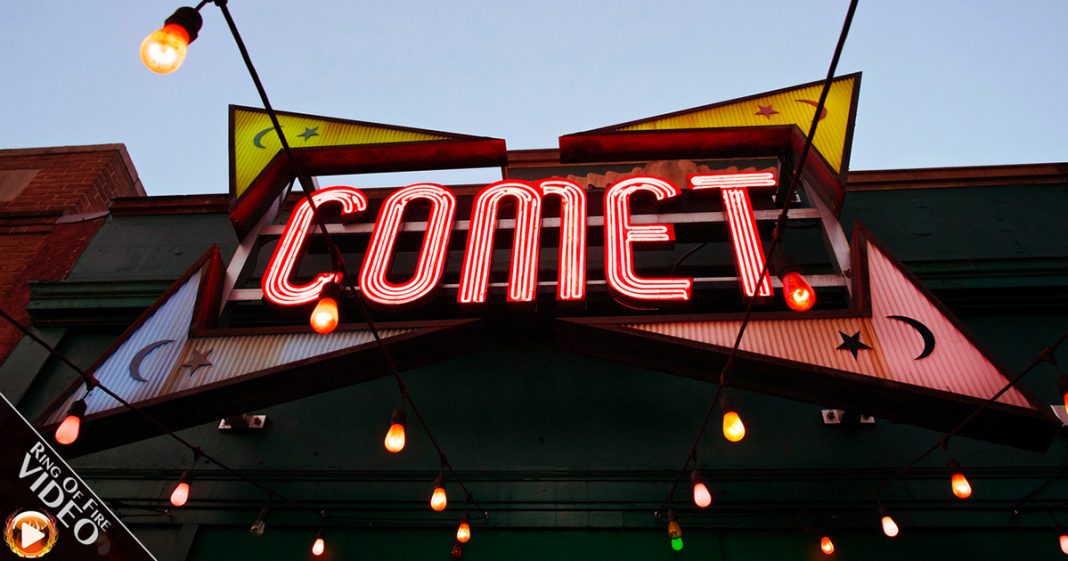 Breitbart is responsible for pushing the fake news story about a pedophilia-related pizza chain somehow linked to John Podesta and Hillary Clinton, which resulted this weekend in a crazed gunman shooting up the restaurant. Trump’s own Chief Strategist was responsible for this story, and his national security advisor has also propelled the story on Twitter. The Ring of Fire’s Farron Cousins discusses this.

This past Sunday a crazed gunman entered a pizza restaurant, Washington, DC, shot up the place, luckily no one was killed. However, the aspects of this story are like none that we have ever seen. The reason this man, this white man, picked this particular pizza shop in Washington, DC is because he believed that it was some sort of undercover pedophilia ring that was also somehow tied to both John Podesta and Hillary Clinton.

He wanted to go in there being a little vigilante and kill as many people as possible and luckily he was unsuccessful in that regard. However, there were plenty of people in the building including a lot of children probably going to be traumatized for quite sometimes if not irrevocably, so a lot psychological damage caused by this attack. The reason this man believed that this pizza chain was somehow an undercover pedophilia ring was because Breitbart News told him that.

Steve Bannon, while editor of Breitbart News before he became Donald Trump’s chief strategist repeated this story nonstop. It was a story that actually began with Andrew Breitbart before his death. Bannon continued it once Andrew died. Michael Flynn, Donald Trump’s National Security advisor, has repeatedly tweeted out this story as has Flynn’s son who is on Donald Trump’s transition team as well. We have three members of the Trump administration that are pushing this bogus conspiracy theory that somehow John Podesta goes into a pizza shop and orders children to have sex with.

That is what Breitbart is telling us and it’s all based on emails that were uncovered during one of the leaks actually many years because John Podesta likes to eat pizza and somehow that makes him a pedophile and he goes into pizza shops and orders pizza. If it sounds like I’m struggling to explain this it’s because I really, really am. I am try to figure out any piece of logic, how any person with a rational thinking brain can actually connect those dots.

I’m not actually just talking about the gunman, I am talking about the idiots at Breitbart. They inspired this violence. They are 100% responsible. Will they be penalized? Absolutely not. We got three of them headed into the Trump administration. The only thing that we can do at this point, and it would actually have to be John Podesta himself, is sue this company for libel. Sue them so badly that they are forced to shutdown.

Send a message to these fake news organizations that push these bogus conspiracy theories that if you do this, you will get sued and we will take everything you’ve ever earned and you will be gone for history. That is what Podesta has to do, not what he should do, this is what he has to do. Make Breitbart go the way of Gawker because Breitbart is inspiring violence. Breitbart isn’t smart enough to understand that words have consequences, and in this case they were almost deadly consequences.

The justice department needs to step in. The FBI, and investigate Breitbart but we have to shutdown this fake news nonsense that is taking over the United States and the only to do that is to sue them into oblivion. They will understand when they go to the bank and have no more money to pay their employees, no more money to pay their utilities, no more money to host their website. That will wake them up and that will also help the public discourse in the United States. It has to stop and the only thing that these people respond to are financial issues. Let’s take their money away from them.