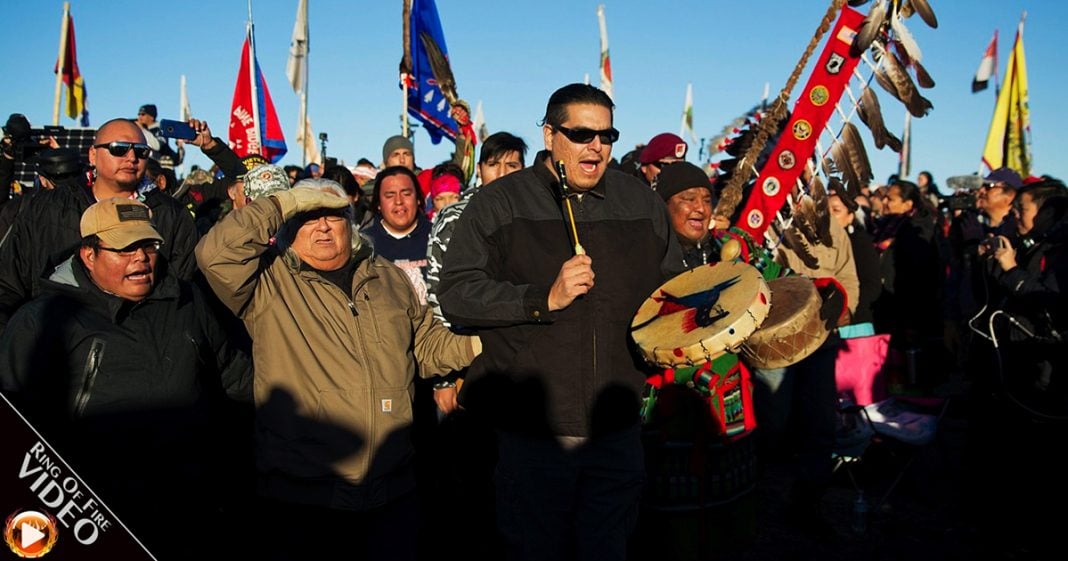 The months of activism and the heroic show of strength from Native Americans and other protestors has finally paid off, and the Army Corps of Engineers has said that the Dakota Access Pipeline will not travel through Standing Rock. This story proves why activism is so important as we approach the era of Trump. The Ring of Fire’s Farron Cousins discusses this.

In a huge victory this past weekend, the Army Corps of Engineers made it very clear that they have decided to not route the Dakota Access Pipeline through the Standing Rock Reservation. Now, this is exactly what native Americans and brave heroic activists have been fighting for for months now is to stop this pipeline from going through this sacred tribal land and over the aquifers that could potentially poison hundreds of thousands if not millions of Americans if there were ever to be a pipeline spill. Given the history of pipelines that was a pretty much 100% guarantee would happen.

The Army Corps of Engineers has said that the pipeline will not go through Standing Rock which means that the Native Americans, the activists, the people, the decent people of the United States won. They were victorious because they were organized, they were energized, and they didn’t back down. That’s the lesson that we have to take out of this victory. They didn’t back down. We can’t forget the role that social media played in this. Twitter, Facebook, everyone on social media chipping in. The people that sent supplies. Using social media to organize and get other people to come out there.

That is what the 21st century is all about. We have to stand up, and we now have these great wonderful tools to organize better than any point in American history. Another reason why this is so important is because once Donald Trump gets sworn in, this kind of resistance, this kind of organization, this kind of heroics like we saw from Native Americans and activists, this is going to be mandatory under a Donald Trump presidency to prevent some of the most horrific things that he has promised he’s going to deliver to Americans.

We have to stand up. We have to fight back. We have to be involved. Let Standing Rock be the example that we all follow. We see it. We saw it. We watched it. We checked in on Facebook, but we have to check in permanently. We have to be a part of this. We cannot sit on the sidelines because if any of these activists had said screw it, I’m going home. If they would have bowed down to the horrific pressure put on them. The water cannons and freezing temperatures, the dogs, the rubber bullets, they still stayed strong.

That’s nothing short of a miracle to be perfectly honest with you especially considering how horrible this entire 2016 news cycle has been, to finally get a victory for the people, finally. Standing Rock should define 2016, not Donald Trump, not Hillary Clinton, not even Bernie Sanders. Standing Rock is the biggest victory of this year, and we have to carry that momentum forward because it’s the only thing that’s going to keep us together and keep us sane during Donald Trump’s presidency.