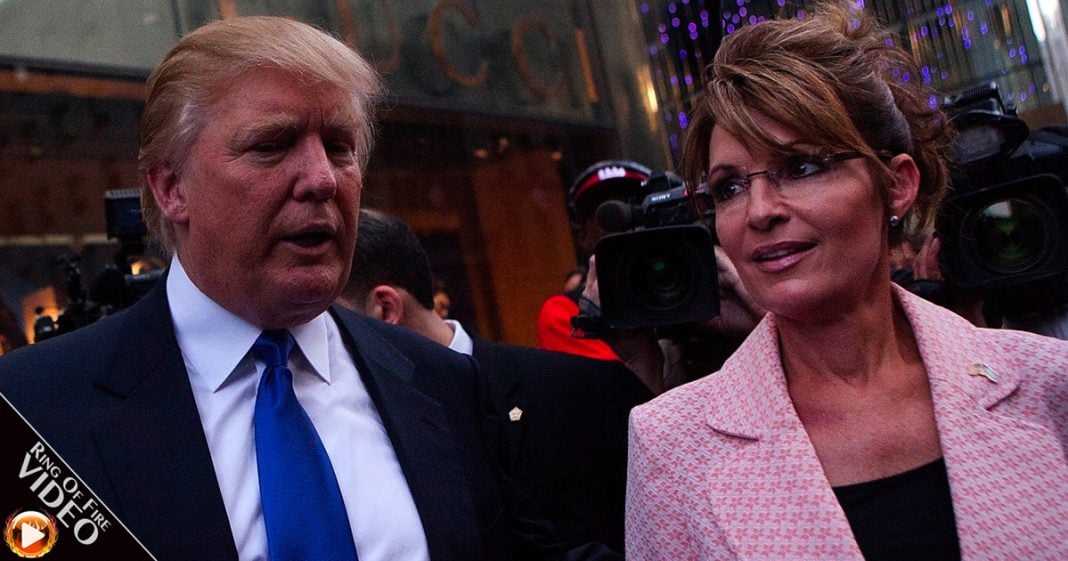 Sarah Palin fired off a scathing op-ed late last week, accusing the Trump administration of committing the same kind of crony capitalism that he railed against during his campaign. And Sarah isn’t alone – many Trump voters have already said that they regret their decision to vote for him. The Ring of Fire’s Farron Cousins discusses this.

Few people were as excited about Donald Trump’s campaign during the campaign than Sarah Palin. She was a die-hard Trump supporter, did a couple speeches with him, some rallies. They were just the best of buds. At one point, he promised her a spot in his cabinet. Man, those two, it was a romance waiting to happen until Donald Trump won the election. Late last week, after Donald Trump announced that Mnuchin from Goldman Sachs was going to be his new treasury secretary, an angry Sarah Palin took to her computer, cranked out an op-ed that I hate to say it, I 100%, I 99% agree with what she had to say because she absolutely went after the Trump administration for crony capitalism, something that Donald Trump himself had particularly railed against during his actual campaign.

Palin ripped Trump for picking these Wall Street bankers, these D.C. insiders and everybody from the swamp that he was allegedly supposed to drain. Instead, he’s pumping that swamp directly into the White House in a way that we have never seen before. Now, here’s the 1% where I don’t agree with Sarah Palin. You know, she says, ‘I thought the Democrats did it.’ The Democrats do it. Don’t get me wrong. The Democrats do it, but crony capitalism is a Republican staple. If you don’t believe me, look at the George W. Bush administration. We had big pharma insiders running the FDA. We had oil executives running the Department of Interior. Everybody within that administration had some kind of ties to big business, so that is what Republicans do, so my question now is, ‘Why is Sarah Palin even surprised about this?’

Donald Trump has no idea what he’s doing. He only knows people that he wants to return favors for, or get something out of in the long run, and that’s exactly what he’s doing because that’s what Republicans do. It’s embedded in their DNA. Republicans can’t help themselves. All they know is what they can get out of a deal, and that’s what Donald Trump is doing here, and it is ironic because Sarah Palin is not the only Republican who’s starting to have regrets about supporting Donald Trump.

A lot of Donald Trump supporters now are saying they regret their vote, one, because of this crony capitalism issue, appointing people from Goldman Sachs and from the energy industry and all that kind of stuff, but the other is because now they’re afraid, they didn’t realize Donald Trump’s going to take away their health insurance. Here’s what I have to say about all of that. Sucks to be you, okay. I really want to have sympathy for you, believe … Yeah, I’m a very caring person. I don’t like to hurt anybody’s feelings, but you did this to yourselves and you did this to the rest of us. I do not have sympathy for you. You screwed up. If you lose your health insurance, that’s on you. If you lose your house because you voted for a guy that put in a serial repossessor in charge of the treasury, that’s on you.

We could have predicted this would happen. In fact, we did predict this would happen. You should have been paying attention, folks. I have no sympathy for people who vote Republican and then get all of their entire life basically stripped away because of Republicans. Educate yourself. Stop voting on these knee-jerk reaction issues like abortion or same-sex marriage. Those are distractions. That’s what Republicans use to confuse you so that while you’re concerned about whether or not somebody’s having an abortion, you didn’t realize that the Republicans just passed a bill that makes it easier to steal your house from you for 97 cents. You get what you paid for, Republicans, including you, Sarah Palin, and you guys absolutely are going to pay the price for voting for Donald Trump.