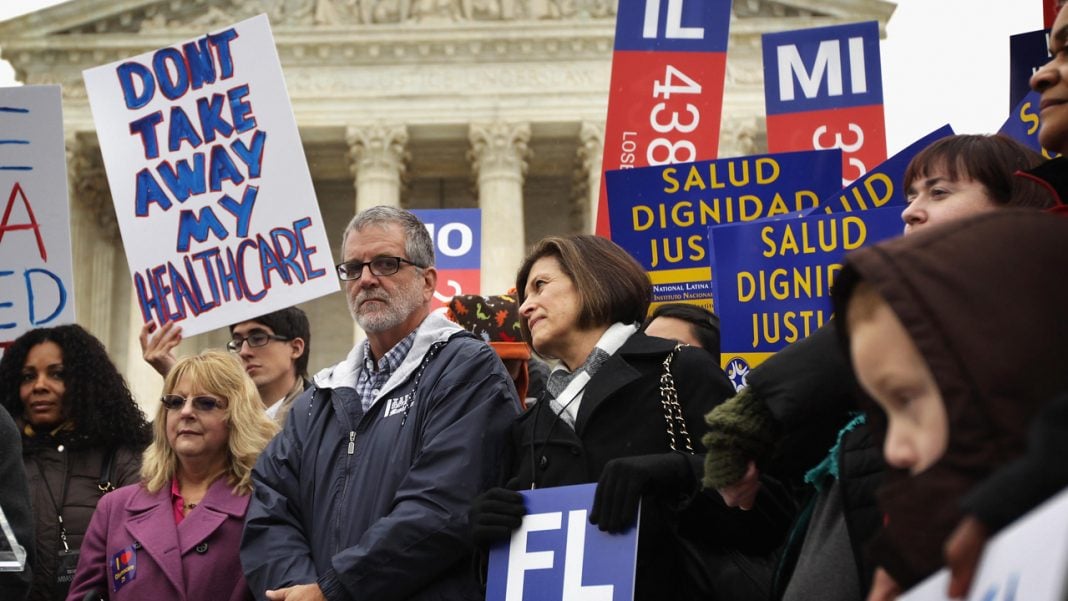 Republicans in Washington were all set to repeal the Affordable Care Act, but now they’ve realized that after years of trying to “repeal and replace Obamacare,” they don’t actually have a plan. While this isn’t surprising, it does tell you a lot about the mental stability and critical thinking skills of the modern GOP. The Ring of Fire’s Farron Cousins discusses this.

For years, Republicans have been telling us and attempting to repeal the Affordable Care Act. “Repeal and replace” is the phrase that they have always used since day one. ‘We’re going to repeal it and we’re going to replace it. We’re going to take it away from you. We’re going to give you something better.’ Since Donald Trump won the election and Republicans saved their majorities in the House and Senate, they’ve done nothing but talk about repeal and replace, repeal and replace. Paul Ryan has said they’re absolutely ready to pull the trigger on this, but today Senate Republicans are saying, ‘Hold up. Not so fast, because as it turns out, we really have no idea what we’re going to replace it with.’ In essence, Republicans are telling us, ‘You know, I never thought I’d get this far with this plan, so you got to actually give me some time to think about this, because it’s a big frigging deal,’ to paraphrase Joe Biden when the law was signed.

Now, it’s not a surprise that Republicans have no idea how to govern. They don’t know what kind of law they want to write. They don’t know how to protect American workers, and consumers, and citizens with a kind of healthcare bill that we need, and that’s why they’re kind of freaking out right now, because they have been making these promises to their constituents for six years. They have been wasting time in the House of Representatives for six years trying to repeal the Affordable Care Act, and promising us along the way that they’re absolutely going to replace it with something better.

It turns out, that something better doesn’t quite exist yet. Again, it’s because Republicans are all talk, no action. They only came out against the Affordable Care Act because they thought that’s what their constituents wanted to hear, because their constituents still were under the false belief that this thing was going to contain death panels, or that the government was going to tell you which health insurance company you had to purchase from regardless. They thought it was going to raise their taxes. They thought it was going to be the worst thing ever, and it turns out that those red states are the ones who most rely on the Affordable Care Act.

I think Republicans kind of understand that now. I think they understand that the second they repeal it, their constituents are the ones who are going to lose their health insurance, which means their constituents are going to be the ones pissed off, which means those Republicans are the ones who are going to pay the price. On the one hand, you have to give it to the Republicans a little bit, because they actually kind of learned something here. You can’t just make all these promises without something in the works. I mean, again guys, you had six years that you’ve been talking about repealing it. Not once during those six years did anybody look around and say, ‘Hey, hey what are replacing this with, by the way? Has anybody drafted that bill? Has anybody looked into it? Has anybody done research? Has anybody talked to people?’

You guys didn’t have the foresight to do it then, so what makes us think you’re going to do it now? The answer is that you’re not. The Affordable Care Act is not going to go away in its entirety, at least not anytime in the next couple weeks, probably not the next couple months, because Republicans in Washington aren’t smart enough to replace it with anything. They are smart enough though to understand that it’s the people who voted for them that are going to lose their health insurance, and those Republicans are the ones who are going to lose their jobs if they take Obamacare away.