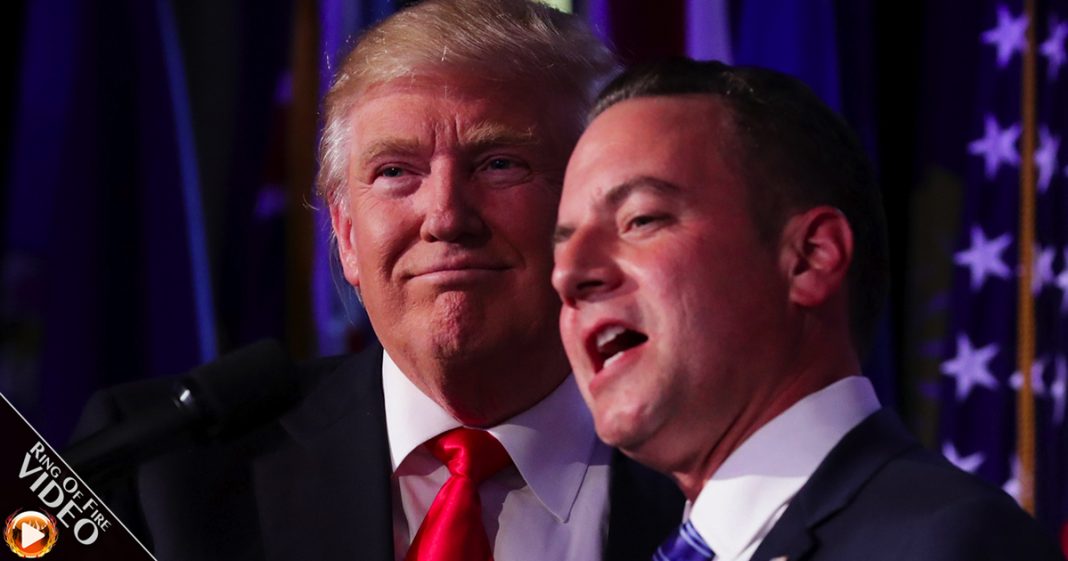 Reince Priebus, Donald Trump’s pick for Chief of Staff, confirmed to Fox News that climate and science denial was going to be the default position of the Trump administration. The Ring of Fire’s Farron Cousins discusses this.

After Donald Trump told the New York Times recently that he has a very open mind about the issue of climate change, that he also has an open mind about possibly pulling the United States out of the Paris Climate Accords Reince Priebus former chairman of the Republican National Committee, now Donald Trump’s Chief of Staff was very quick to go on Fox News and explain, ‘Listen, the crux of the Donald Trump administration, their default position as they called it is going to be to deny that climate change is real.’ Basically, our default position is to deny that science exists. That is coming from Reince Priebus on Fox News, the Chief of Staff for Donald J. Trump the next president of the United States.

I know I beat this issue a lot. That’s because to me when you consider everything connected to climate change it really is the most important thing in the United States, the most important issue. It’s one that we all have to think about constantly, something we have to work on. A lot of people don’t like that, they don’t like when I say that it’s the most important issue. They say, ‘What about racism? What about the economy?’ Well, guess what folks? The environment is tied to all of those. Environmental racism is a real thing and it’s affecting people of color, poisoning them.

We’re seeing developmental problems related to environmental pollution in African American youth. His name unfortunately escapes me at the moment, the man who was killed in the back of the police vehicle when they took him on the rough ride. His family was part of a lead contamination settlement. He had overexposure to lead when in his youth, affected his brain development and that is what eventually led to his death. When we talk about environmental issues we have to talk about the environmental racism and how it disproportionally affects people of color and how it then effects the rest of those people’s lives.

Same thing with economics. This is one of the biggest things about the environment that Republicans will never understand. For every one dollar we invest in renewable energy the direct economic benefit is four to seven dollars. For every one dollar we invest in oil or coal the direct economic benefit is less than two dollars. Which one of those makes more sense? Spend one dollar, get four back or spend one dollar get two back? That’s a no-brainer. Every single human being on this planet would pick one for four instead of one for two except the United States and Republicans. They pick the one for two. That’s idiotic. It’s stupid. That is what Republicans in Washington are. They are stupid. I am sorry.

If the default position according to Reince Priebus of your political party leadership is that the science isn’t real then you’re an idiot. There’s no other word for it. Well, there is but I’m not going to say it on video. That’s what we’re looking at here folks. This is the Trump administration’s position. Science isn’t real. The climate’s just fine, but hey, don’t worry because Donald Trump still has an open mind, except when it comes to climate change.