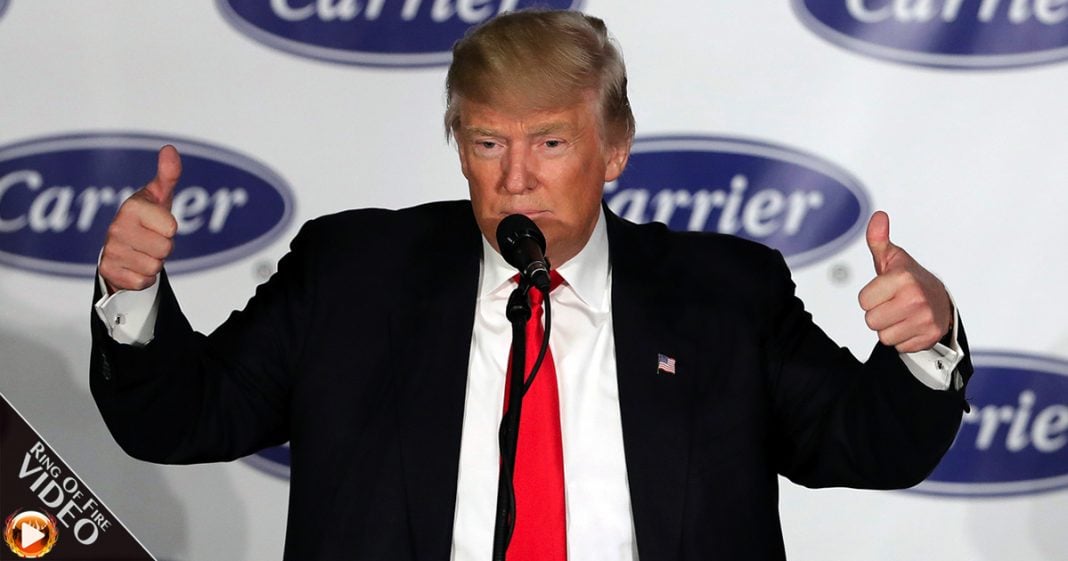 Donald Trump is getting far too much credit for saving a few hundred jobs at Carrier, considering the fact that he broke the bank to keep those jobs and most of them are still leaving the country. He’s showed his hand too early, and now the rest of corporate America knows the blueprint to outsmart the con man. The Ring of Fire’s Farron Cousins discusses this.

Donald Trump’s deal to keep these Carrier jobs in the United States has obviously been getting a lot of press these last couple days. Right wingers are touting it as keeping the campaign promise, keeping those good jobs in America, but the rest of us in the reality-based community understand that what Donald Trump did in this Carrier deal is a huge, huge disaster. First of all let’s get something straight. There were 2,000 jobs at stake that Carrier wanted to move out of the country. A little over 2,000. 800 of them are staying in the United States. The rest of them, still going to Mexico. Donald Trump in his deal, officially saved less than half of the jobs. What did he give away in order to save those 800 jobs? $7 million dollars in tax breaks over the next ten years to this one company. As Bernie Sanders has pointed out, Donald Trump, basically, just told corporate America the blueprint for dealing with him.

In spite of the fact that during the campaign, Donald Trump said, quote, “I will make them pay their damn taxes, if they attempt to move their jobs out of the United States.” Instead, he has literally done the opposite. If you threaten to leave the United States, I will reduce your taxes. Wow. Complete reversal and Republicans seem completely oblivious to this fact. Furthermore, suppose he hadn’t given away the farm in this deal. Suppose it was just a deal and he managed to keep 800 jobs in this country. Under President Obama’s watch, the economy in the United States has added 15.5 million jobs.

If Donald Trump were to make a deal like this every single week, of keeping 800 jobs, once a week, forever, it would take him 352 years to equal the total number of jobs created under the Obama administration. That 15.5 million jobs that were created under Obama includes 3.5 million jobs in the auto industry from the auto industry bailout that the Republicans opposed. Republicans wanted those 3,500,000 jobs to go away, because they didn’t want to support President Obama’s auto industry bailout. We’ve had 73 consecutive months, consecutive months, in the United States of private sector job growth. President Obama does not get enough credit for this. After all, when George W. Bush had a couple of months of job creation he got all the credit, so you give credit where credit’s due.

President Obama didn’t personally create those jobs, but he created the environment under which those jobs could be created. The employment numbers for November are in. The official unemployment rate in the United States is 4.6%, the lowest it’s been in nine years. That’s pretty good. Yet, we’re all still supposed to celebrate the fact that Donald Trump is still allowing a company to ship more than half of their jobs to Mexico in exchange for $7 million dollars? That’s not a deal. That’s a shakedown. Donald Trump, the con man, got conned by Carrier Air Conditioning. That’s pretty sad. If Donald Trump was serious about wanting to create jobs in the United States, why doesn’t he just ship the manufacturing of his goods back to the United States?

That’s one of the things that got severely overlooked in the presidential campaign. Hillary Clinton did run several ads discussing it, though, is the fact that Donald Trumps goods, his clothing lines, all of those things, including his children, are made overseas. They’re using cheap, overseas labor to build his own goods, and we’re sitting here acting like the man creates jobs? Or saves jobs? How many jobs could be created if he just brought his own company’s manufacturing back to the United States? That’s what I want to know. I want to know why Republicans don’t seem to care about that. The main reason they don’t seem to care about it is because they’re not based in reality like the rest of us. We see this deal for what it is.

This was a con job by Carrier Air Conditioning Company, and all other companies in the United States with a brain are going to do the same thing. They’re going to say, ‘Look, Donald Trump, we’re going to move our company to Canada, unless we get $10 million dollars in tax breaks. What are you going to do? You did it for Carrier, you’re not going to do it for us? All right, we’re going to go.’ Of course he’s going to do it every time, and that is going to be dangerous for this economy. We’re going to lose so much tax revenue, because Donald Trump keeps giving it back to corporations just so they don’t ship their jobs overseas or out of the country, even if they weren’t, necessarily, planning on it. Donald Trump, in this last week of November, first week of December, showed his hand as president, and that’s certainly not something you want to do before you even take office.