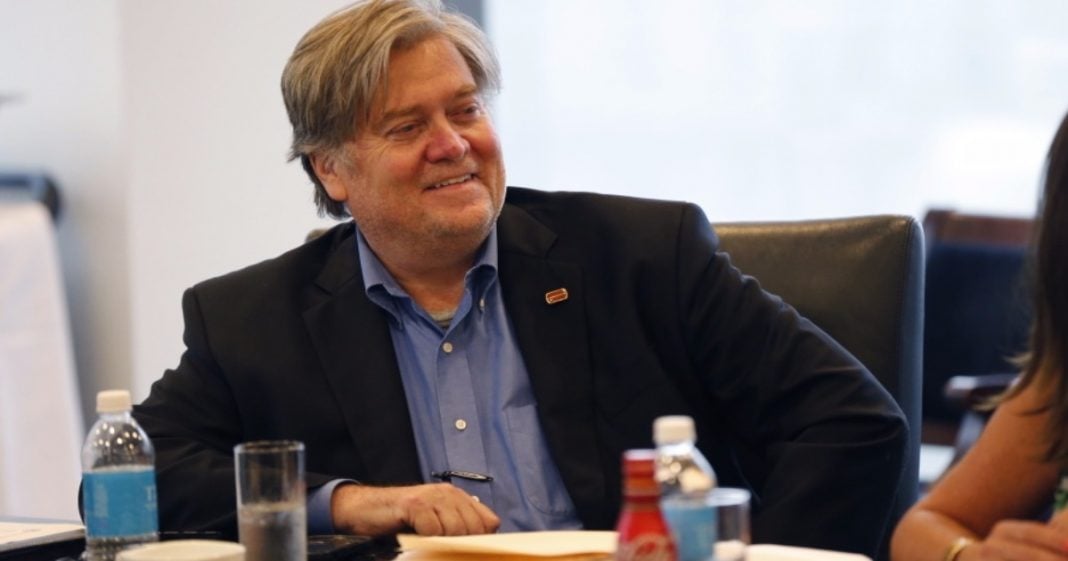 Many may nostalgically long for the good old days, but Donald Trump’s chief adviser Stephen Bannon wants to take that idea to a whole new – or old, depending on your perspective -level. If Bannon has his way, voting rights would be granted only to property owners, an archaic idea from the days of slavery.

Not coincidentally, the vast majority of property owners are white males. In fact, according to the Huffington Post, the five largest white landowners in America together own more rural land than all of black America combined.

This ass-backwards opinion on voting is yet one more way that Bannon is proving himself to be the bigoted, racist white supremacist that he is accused of being.

During the colonial and revolutionary periods of U.S. history, voting rights were restricted to those who owned property – and the overwhelming majority were white, Protestant and male. This continued during the Articles of Confederation, under which the thirteen original colonies were essentially independent, loosely allied sovereign states.

After the adoption of the U.S. Constitution in 1787, there was no national standard governing who was allowed to vote, so the issue was left in the hands of the individual states. However, very little changed under the new system; by the time George Washington was elected President, only 6% of the population was eligible to vote. In 1790, Congress passed the Naturalization Law, which allowed only free, white immigrants to become full-fledged citizens.

It wasn’t even until 1848 that the issue of universal suffrage was even brought up, which was addressed by the great African-American orator and author Frederick Douglass at a women’s rights convention in New York that year. Although voting rights for women and minorities were not granted for decades, property ownership requirements were finally lifted nationwide by 1856.

Shockingly, when a former colleague publicly called Bannon out on his opinion that voting rights should be accorded only to property owners and that such a plan would disenfranchise an overwhelming number of African-American citizens, he replied, “Maybe that’s not such a bad thing.”

That former colleague, Julia Jones, told the New York Times that Bannon has not only “mused about the desirability of limiting the vote to property owners,” but has also spoken out on the issue of “genetic superiority.”

Bannon doesn’t even attempt to deny it.

In more reasonable times, anyone who made such comments and held such beliefs would be immediately disqualified from being part of a presidential administration. But as we have seen, the dubious ascendancy of Donald Trump has now made open bigotry and virulent racism acceptable.

From the standpoint of the fascist right wing and the GOP, the idea of restricting voting rights to property owners makes perfect sense. To the majority of Americans who are sensible, open, and moderate in their views, the ideas and the agenda of the right wing are anathema.

Furthermore, the right wing knows it. Thom Hartmann has pointed this out frequently: the only way the right wing is able to win at all is to suppress the vote. Bannon’s regressive agenda would go a long way toward cementing right wing control over this nation for decades – if not permanently.

This is what we get for electing “The Donald.”

As someone from Germany told America, “Go ahead – elect the man with the loud voice who hates minorities, threatens to imprison his opponents, cares nothing for democracy and claims that he alone can fix the nation’s problems. What could possibly go wrong?”