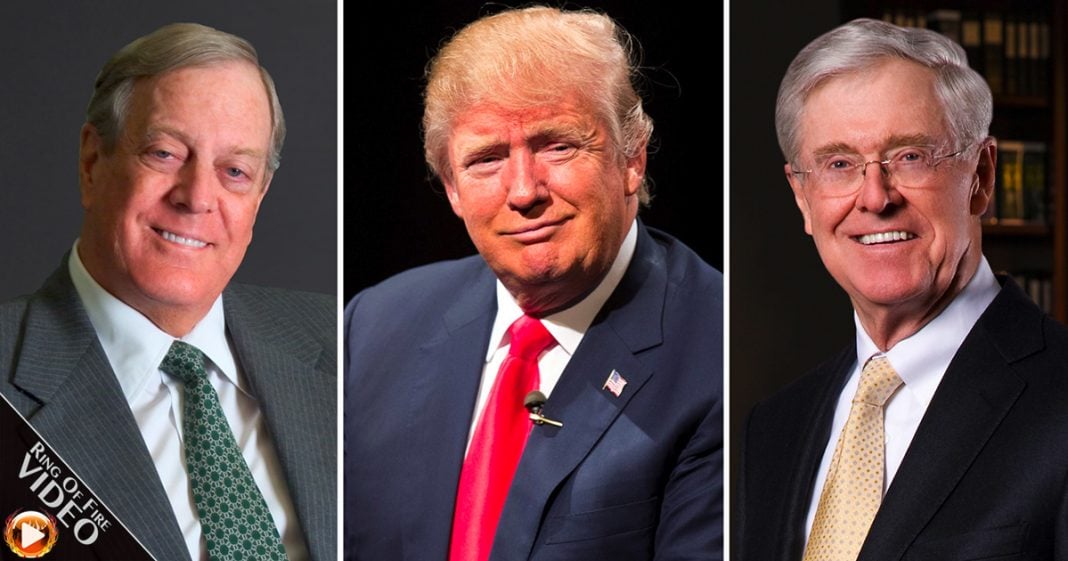 Donald Trump likes to project the image that he’s in charge, but in reality, the Koch Brothers have their slimy fingers all over Trump’s cabinet picks and the policies that these people are trying to pass. This is the era of Koch in the White House, and Trump doesn’t even realize he’s being played. The Ring of Fire’s Farron Cousins discusses this.

Donald Trump, from the second he announced his candidacy for President and all thought the campaigns and since the election was over has always wanted to portray himself as the biggest man there is. He’s in charge. Nobody bosses him around. Nobody tells Donald Trump what to do. He is the guy, right? Well, as it turns out he’s not. I mean, first of all it’s pretty obvious to anybody watching this guy has such low self esteem that he has to portray this image. Even Donald Trump himself doesn’t realize how badly he’s being played right now by the Koch brothers. As it turns out, the majority of Donald Trump’s cabinet picks actually have ties to the Koch brothers themselves or to Koch funded organizations and as members of the Trump cabinet will be pushing Koch sponsored policies. Furthermore, the Koch brothers basically have a strangle hold on Donald Trump’s entire environmental protection agency pick and over his energy policy itself.

Donald Trump is a puppet of the Koch brothers and the saddest thing is he doesn’t even realize how badly he is. He’s getting played. The Koch brothers won this election. I know they put a lot of money in and most of that went to down ballot races because once they realize that they had a billionaire running for president, they knew they were pretty much going to go ahead and get everything that they wanted so they wanted to shore up their support in the house and the senate as well as state races across the country. That’s where the majority of their money went. With Donald Trump, he’s picking their guys. He’s picking their people to serve in his administration. As I’ve pointed out, Donald Trump, a man who knows nothing about politics, nothing about policy, nothing about governing, he’s going to be reliant upon his advisors and his cabinet more than any other president in our lifetimes.

These people that grew up around the Kochs, had their whole career funded by the Koch brothers, they’re going to be calling the shots in Washington DC. What does that mean? It means reduced environmental protections. It means reduced workplace protections. It means overall degradation of the American quality of life once we allow the Koch brothers and their little puppets in Washington to continue to destroy the environment and take away all of the safety precautions that we enjoy in our workplace. We’ve already seen Obama’s overtime rule get slashed by one of Obama’s own appointed judges. Just imagine how bad things are going to be when these little Koch puppets get in there and start changing our labor laws. The Koch brothers don’t want to have to pay worker’s compensation claims. The Koch brothers don’t want to pay overtime pay. The Koch brothers don’t want to clean up the messes they make in our environment that poison men, women, and children and school systems. We’re finding out now a lot of the fracking wells in this country are within a mile or two of schools. Schools that drink the water that’s being polluted by the fracking wells that the Koch brothers love so much.

That’s going to be put on steroids because essentially Charles and David Koch are members of Donald Trump’s cabinet. Again, Trump doesn’t know it. Trump doesn’t realize it, but that’s the way it is when you look at the history of these people that Donald Trump is putting in power and the types of policies that they’re already proposing. They’re all things that the Koch brothers themselves have tried to get passed in the past.