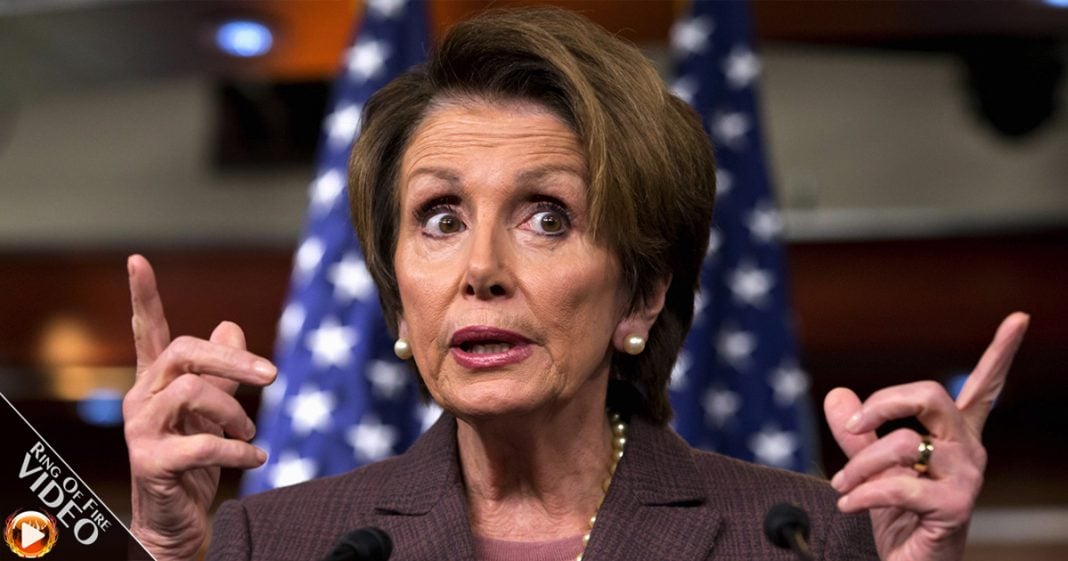 Democrats in the House of Representatives have re-elected Nancy Pelosi to serve as their leader once again, even though House Democrats have suffered enormous electoral defeats since she came to power. They’ve learned nothing from defeat and are destined down the same losing path as a result. The Ring of Fire’s Farron Cousins discusses this.

In a sign that Democrats have learned absolutely nothing from all of their electoral failures over the last ten years, the House of Representatives have reelected Nancy Pelosi to serve as the leader for the Democrats. That could not have been a worse decision and here’s why. Nancy Pelosi is a fighter, I will give her that. She is a fighter. She stands up for what she believes in, but she is not a good leader. At least not anymore. Her time is up. The Democratic party needs to understand that they have suffered election loss after election loss and as the leader in the House of Representatives, some of that blame falls on Nancy Pelosi. She’s got a direct line into the DNC. She’s got a direct line into the Senate. Direct line into the White House. You know, you’ve got these four little groups here that share this blame and Nancy Pelosi, as leader of the House, is part of the problem.

Part of her problem is her age. The average age of Democratic leadership in the House of Representatives now, after this election, is 72. 72 years old! Average age of Democratic leadership. That does not reflect the average age of the average Democratic voter. No, that’s down in the 40’s. Why are we sticking with these aging elderly, by definition, Democrats, who only know how to lose elections? Part of the reason is because Nancy Pelosi is a phenomenal fundraiser and, hey, money is the answer to everything, right Democrats? I mean, you raised more than Donald Trump in this last election but you won, right? Didn’t you? No, you didn’t? Okay. Money doesn’t mean anything, but that’s the number one reason why Nancy Pelosi retained her job, because she’s such an effective fundraiser. What has that money done? Well, since 2008, the Democratic party has lost 10% of the Senate seats that they had in that eight year period. They’ve lost 19% of the House seats that they’ve had during that period. They have lost 20% of the state legislatures that they had held in 2008 to today. And 35% of the governorships that they had held.

Across the board, losses for the Democratic party, and here they are wanting to make the exact same mistakes that they’ve been making for the last eight years. What is it going to take to get through to these people? They’ve lost the House. They’ve lost the Senate. They’ve lost the White House. They’ve lost state legislatures. And they’ve lost the majority of governorships. The Democratic party, in the United States today, because they refuse to change their path, has virtually no power. Absolutely becoming irrelevant, because they refuse to look themselves in the mirror and say that, “You know what? We have a problem.” I mean, how many times has the Republican party reinvented itself in the last eight years? We had the Tea Party insurgence. We had the Alt-Right. None of these things are admirable, but at least they’re reinventions. Hell, they’re trying new things.

It’s time for Nancy Pelosi, if she actually cares about the Democratic party, to look around and say, “You know what? I haven’t done a good job. The numbers prove that. I think it’s time for me to step down and let, maybe, one of these younger members come up. Lead us in a new direction, for a new century, for a new generation.” But they won’t do that. When it comes down to it, Democrats in Washington can be just as selfish and self-absorbed as Republicans. They only care about preserving their future. You know, what is my legacy? What do I get out of this? Oh yeah, maybe I’ve destroyed the party, but it’s okay because I get a lot of money. So to hell with the party, which basically means, to hell with the country, because you’re letting Republicans run everything and destroy everything that we hold dear. But, yeah, it’s all about you.

And that’s the Pelosi problem. That’s the Democratic leadership problem. If they do not change, if they do not accept responsibility for their own failures, they will never move ahead.