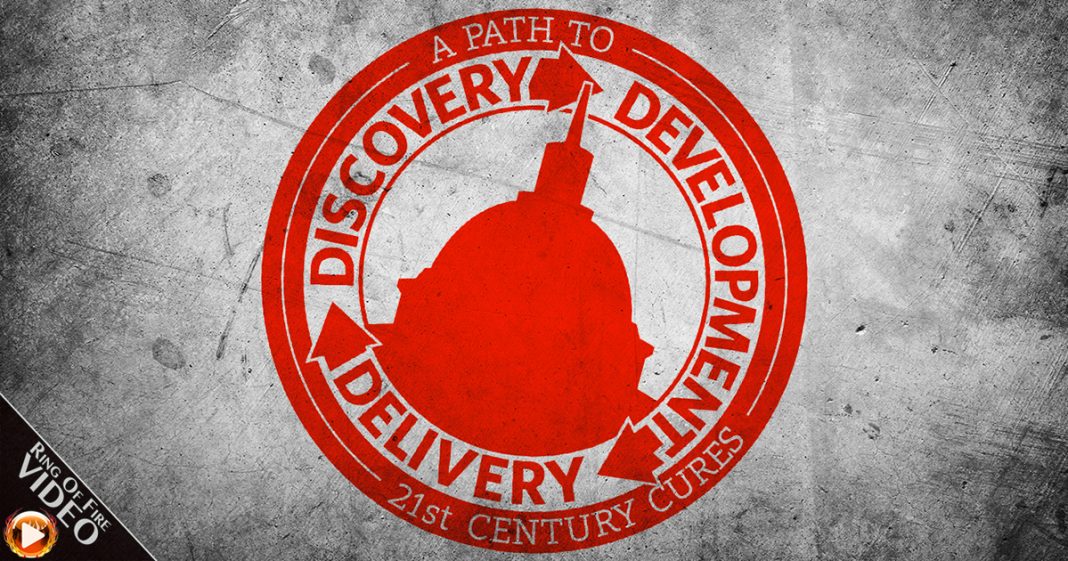 The House of Representatives has passed the 21st Century Cures Act and the Senate is poised to vote on a version of the bill next week. While some are touting the bill as a positive step forward for medicine, it actually puts consumers at an unnecessarily high risk from bad medicine by removing strict FDA testing requirements. This is a huge bill for big pharma and an enormous threat to your health. The Ring of Fire’s Farron Cousins discusses this.

So the House of Representatives has passed the 21st Century Cures Act. Next week the Senate will vote on their version of the bill, then there’ll be reconciliation between the two. We’ll get a final product that’ll go to the President, blah, blah, blah. Now, the name of this bill itself, the 21st Century Cures Act, sounds amazing. Sounds like hell yeah, that’s something I want to support, which is typically what Republicans do to make a bill sound more intriguing, just like they did with the Patriot Act that actually took away all of your rights. Well, the 21st Century Cures Act is really no different. It’s going to take away the Food and Drug Administration’s ability to properly regulate the pharmaceutical industry and the medical device industry.

Here’s what I mean by that. According to the current language in the House-passed 21st Century Cures Act, it’s going to weaken the FDA’s ability to test drugs. It’s going to create what they’re calling a fast track to get drugs approved. Basically the FDA won’t have to bother to do any testing. All that’s going to be done by the pharmaceutical industry, which they’ll pay for themselves, so we can pretty much guarantee how that’s going to turn out, or they can now rely on publications and medical journals, which they also pay for. So we don’t have to worry about spending government money to test these drugs to make sure they’re not going to kill people. We’ll just take the pharmaceutical companies’ word for it.

Now, I don’t know if anybody watching this has ever gone through the documents of a lawsuit against big pharma, because I have. I’ve done it quite a lot, and I advise everyone to go search the internet and find some of the documents from some of the bigger cases, Fen-Phen, Vioxx, things like that. Look at these documents and look at what the pharmaceutical industry has done, because that’s what’s going to happen right now with the 21st Century Cures Act, except it’s going to be on steroids. You can go through those documents and you’ll find instances, many times a single executive or person along that top ladder, who says, ‘Ignore the negative findings. Hide them. Bury them. Cover them up. We need to get this drug approved, because it’s going to make us a lot of money. Yes, it’s going to kill people, but let’s not tell them.’

Those are the kinds of things that you find going through documents in pharmaceutical litigation. People absolutely say those things. They don’t care that their drug didn’t pass the tests. They cover up the bad results. They hide them, literally. Stuff them away in file cabinets where nobody can see them, and then they submit falsified, fake, or rare positive results from a small batch of people who didn’t have side effects. That’s what they submit to the FDA, and then the FDA says, ‘Well, this looks great. You’re approved.’ That’s what’s going to happen even more with this 21st Century Cures Act, because it’s taking away the FDA’s ability to properly do their job.

Now, the FDA has been dysfunctional for about 20 years. George W. Bush packed the agency with so many big pharma hacks that they never even did their job. Obama has been slightly better, but only slightly better. To a degree, maybe it doesn’t matter. Maybe the FDA has just become another tool of the industry anyway, and they’re just trying to take the tool out of the equation, but we know how this is going to end, because we’ve seen the litigation. We’ve seen the results, and we’ve seen the documents before. People are going to die because these drugs are not properly tested. People will die.

Big pharma, they will make billions of dollars more than they currently make because they don’t have to wait five years for drugs to be tested. They can get it to market in six months to one year now. We’re not going to know how it’s going to affect people for another 10 years, at best. Maybe five, if it kills you that quickly, but I can promise you that’s what’s going to happen, because we have seen this story play itself out in courtrooms across this country for too many decades to believe otherwise.