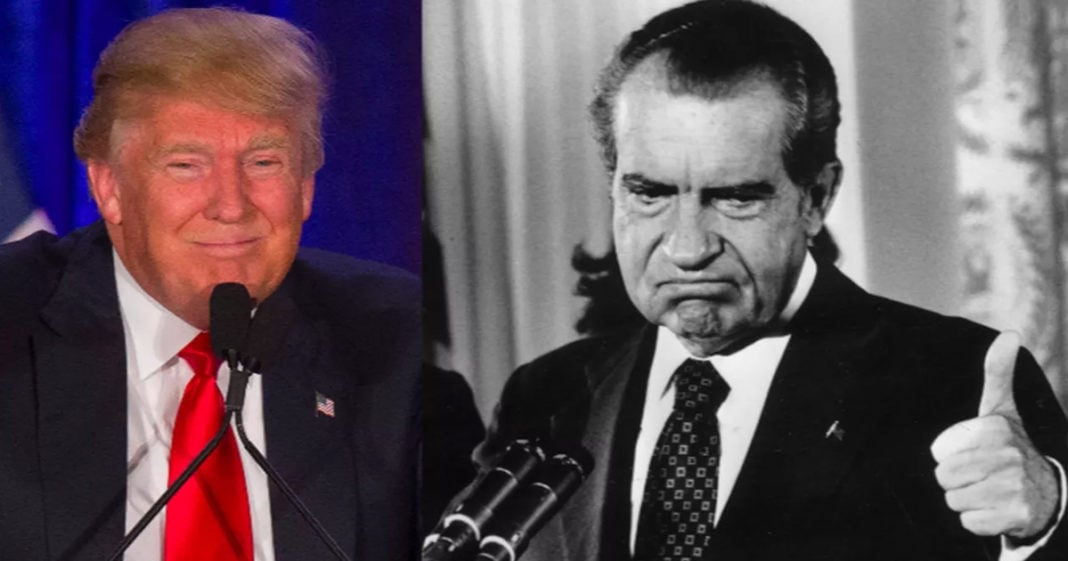 Since being “selected” to office, the egotistical, spoiled Donnie Trump has made many statements that should at the very least raise some eyebrows among those who believe in the rule of law.

In an interview with the New York Times just before the Thanksgiving holiday, he made a doozy: “The law’s totally on my side, the president can’t have a conflict of interest.” He was of course referring to his many global business interests. Not even sworn in, it appears that he is already using the Oval Office to advance his own personal financial interests.

Trump’s statement conjures up similar scenes of Richard Nixon, who in May of 1977 told journalist David Frost, “When the President does it, that means it is not illegal.”

Unfortunately, when it comes to his business, Trump may be correct.

Title 18, Section 208 of the U.S. Code states that employees of the Federal government may not be involved in personal business activities while they are in service. However, there is a loophole – not surprisingly for members of Congress the federal judiciary and the Executive Branch. This means that a sitting President has no legal obligation to place his or her business interests into a blind trust while in Office. Yet, this is what every other President has done.

The exception for Congress, federal judges, Presidents and Vice-Presidents was made in in 1974, and written into the law in 1989. According to the Department of Justice, imposing conflict of interest rules on the Executive could place constraints on the office in ways that are “potentially unconstitutional,” though no specific examples have ever been provided.

So much for the law. Now, let’s talk about ethics and trust.

There are good reasons that a President is expected to separate himself from his personal business interests. It has do to with appearances and maintaining the People’s trust and faith in their government, which has taken a beating since Nixon. What is going to happen to that faith and trust when the nation sees its leader using his position for personal financial gain? How will that affect relations with governments of countries where the Trump Organization has investments?

In fact, the Trump Organization does direct business with many companies that are under the control of foreign governments as well as high-ranking officials in those governments. One of his star tenants is the Bank of China who rents office space in Trump Tower. Significantly, a Manhattan office building in which Trump holds part ownership has a loan in the amount of $950 million – and one of the lenders is the Bank of China.

It may not be illegal, but it doesn’t look good.

Unlike his predecessors, Trump has refused to be forthcoming about his finances, including his tax returns. It makes us all wonder what it is he’s hiding. One thing is certain – if the nation had little faith in its government before, it will have zero faith it in before Trump is finished.