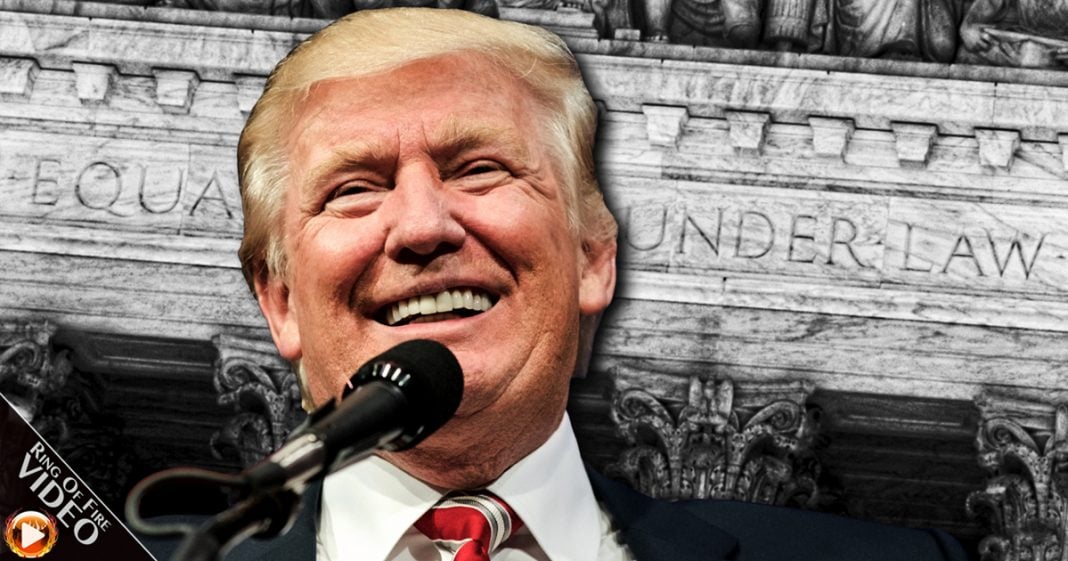 Law Professor David Cohen joins Ring of Fire’s Sam Seder to talk about the potential list of judges Trump could seat on the SCOTUS.

Sam:
We are now looking at a four-four court. Donald Trump has given us some indication as to who, or what ilk, I should say, his Supreme Court nominee will be. This has come primarily from the Heritage Foundation. Just give me your sense. Obviously, so we’re outside of the realm of the law as much as we are sort of I guess politics in some level, but Donald Trump does not strike me as a guy who thinks too much about legal ideology. Even if he did have one, what are the chances that this guy could actually pick a judge that he thinks would reflect that, as opposed to appointing one that those who enable him in the Republican Party would choose?

David:
There were a lot of people who worried about that, and there were a lot of conservatives who worried about that, that he’s such a wild card. He doesn’t really understand much about the basic functions of the government, let alone the court system, that he would pick judges who knew what they were going to do. He gave a list earlier this year of 21 judges who he said would be the list from which he would choose a Supreme Court justice. Those judges were all conservatives, some very conservatives. They were Federalist Society members, and that really pleased a lot of conservatives. Of course, we have no idea if he actually will choose from that list. He would upset a lot of people if he did not, because he made that a part of his campaign, but if he does choose from that list, we’re going to have a die-hard conservative likely on the court.

When that happens, it’s not really going to change much because that would be a die-hard conservative replacing Justice Scalia, who was one of the most conservative justices ever. The trouble comes if he gets a second pick. If he gets a second Supreme Court pick and replaces one of the older members of the court right now, that could really change and give us a solid five justice conservative majority that could take a wrecking ball to precedents that are still liberal precedents that the court follows, and that’s the danger. It’s the second pick that really worries me, if he gets one.

Sam:
Right now, you see Kennedy as some type of bulwark against the worst of the worst. Of course, without the death of Scalia, we probably have a crippled public sector union movement in this country via Fredericks, right? Had Scalia, let’s say, died three to four years earlier, we would’ve actually still had an intact Voting Rights Act, which wouldn’t have accounted for literally millions of people being disenfranchised. We would have greater access to the courts for tort proceedings, and for … The list goes on and on, so it’s either a slow devolution, right, because from an actuarial standpoint, you’re going to lose people from the nominally liberal side at the same rate that you are on the nominally right side, although I guess there’s a … I don’t know.

I guess we just got to hope that Donald Trump meets somebody at a dinner party who says, ‘I’d like to be Supreme Court justice,’ and he goes, ‘I like you. Yeah. Okay.’ Right?

David:
Yeah. His sister’s a judge on the third circuit here in Philadelphia, where I am, and she’s a decent liberal, so some people have speculated that since he’s so focused on his family, that he’s just going to appoint his sister. That would be fine from my perspective, but the problem for liberals right now is that Justice Ginsberg is 83, and she’s a good liberal. Justice Brier is 78. He’s a good liberal. Justice Kennedy is 80, and he’s not liberal at all, but he has voted to uphold Roe V. Wade. He has voted to uphold affirmative action, not in all circumstances, but he has protected some things that we care about, and he’s been very good on gay rights. If any one of those three, and they’re the three oldest on the court, so the conservatives, you’re right, are getting older, but they are much younger. Those are the three oldest judges on the court, and if one of them retires or leaves the court involuntarily, and gets replaced by Donald Trump as President with one of his conservative judges, that would flip the court in a drastic way.

Sam:
Let me just ask you from the perspective … I know how I’m feeling as a liberal talk radio show host, but from the perspective of a law professor, when you look at these things, what is your big takeaway here? So much of what we’re seeing, particularly with the Trump administration elect, even at this point, but also with the Republicans and the way that they’re destroying norms in dealing with the court, how much does this undercut the foundations of the institution of law in this country?

David:
I think that’s the big question for the future, and that’s something that we’re all going to be watching really closely after January 2. Maybe one thing, if Donald Trump as President institutes all sorts of bad policies, but accepts the basic structure of government, and the role of the courts, and the role of Congress, and the role of the President, and doesn’t really change that much. Obviously I’d be against all his policies, because I think everything he suggests is pretty terrible, but that would be one thing. It would be another if he does all of that while acting like a CEO, where he says, ‘I’m in charge. I get to do what I want. Everyone else has to follow me. I’m not gonna listen to Congress. I’m not gonna listen to the courts, because I’m the boss.’

That would be a breakdown of our entire constitutional structure. It would be a threat to our sounding principles. It would be a threat to all of our legal norms, and I think there’s reason why many people are concerned about that, because of the way he talks, the way he obviously doesn’t understand what a president does under our Constitution. There’s I think really good reason to worry about what he might do with respect to all the institutions that are in place to check a president.