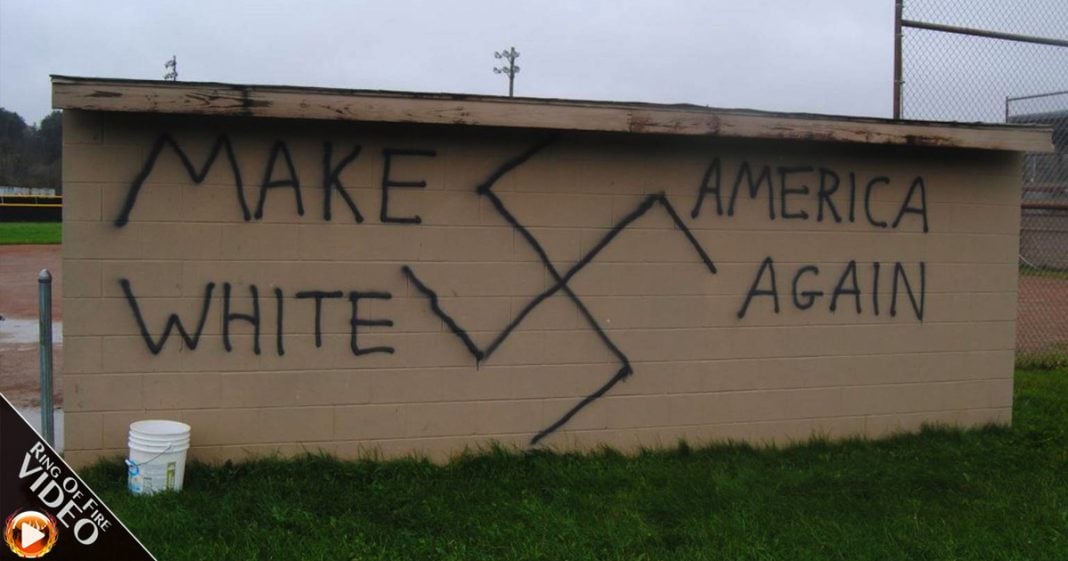 Less than one month has passed since election day, and yet law enforcement officials have been inundated with reports of hate crimes being committed by Trump supporters and the “alt-right.” The Ring of Fire’s Farron Cousins discusses this.

Three weeks have passed since we woke up on the morning of November 9th to learn that Donald Trump was definitely going to be the next president of the United States, thanks to the electoral college. In those three weeks, there have been, according to the Southern Poverty Law Center, a new report, more than 900 instances of hate crimes or verbal hateful assault against people in the United States, and they have linked it back to the victory of Donald Trump.

According to this report, the victory of Donald Trump has empowered white nationalists and people who aren’t necessarily affiliated with any sort of hate group but also tend to hold these deep-seated racist beliefs, and now they feel like they no longer have to hide them. 900 instances reported in three weeks. 900. A week ago, that number was only 400. If you don’t believe this report, which you have no reason not to, but if you’re one of those Trump supporters that just doesn’t believe this is true, I advise you, go look around on the Internet. Look at the stories out there every single day, dozens of them, new instances. A woman going ballistic in a coffee shop in a tirade against a black man because he was in line ahead of her, claiming that it’s okay that she does this because she voted for Donald Trump.

Stories like that are everywhere. The students getting called out by their teachers in class because they’re Hispanic. That’s because of Donald Trump. This type of thing wouldn’t have happened a year ago. I promise you that. These stories barely existed, and now we’re seeing them several times a day, and according to the Southern Poverty Law Center, one of the best groups in this country, they’re saying that it is because of this celebratory nature of these white people as a result of Donald Trump winning this election. Essentially, they’re out there being sore winners, and unfortunately, the sore winners are also extremely racist.

That’s what you have to understand about this. We have to stop labeling this as the “alt right.” That is a meaningless term. It’s something they made up for this election to kind of describe the racist neo-Nazi, white nationalist, white supremacist people who were supporting Donald Trump, because he was out there talking like they do. Talking about building walls and shipping immigrants out, and banning Muslims, and preventing black people from voting. Those are the kinds of things that these people want to do, and Donald Trump spoke their language. It’s not the “alt right.” It is the right. You’re not going to find any liberals among that bunch. There’s no progressives out there saying we need to build a wall and ship all the Hispanics out of this country and ban Muslims from coming in. Progressives don’t believe in that. Conservatives do.

Let’s stop calling these hate crimes as being committed by the alt right. They’re being committed by Republicans, by the grand old party. That’s what these people are affiliated with. Again, a lot of these people aren’t necessarily subscribed members of a neo-Nazi organization or a white supremacist organization, but they are members of the GOP. Their voter registration cards have a big “R” on them, so let’s call them what they are. These hate mongers, they’re Republicans. These neo-Nazis out there spray painting swastikas all over the place, they are Republicans. These people going into tirades against people with a different skin color than them, they are Republicans. This is what the Republican party of 2016 stands for, and there’s not a single person of power left in the Republican party to stand up and say that enough is enough. They believe it too.