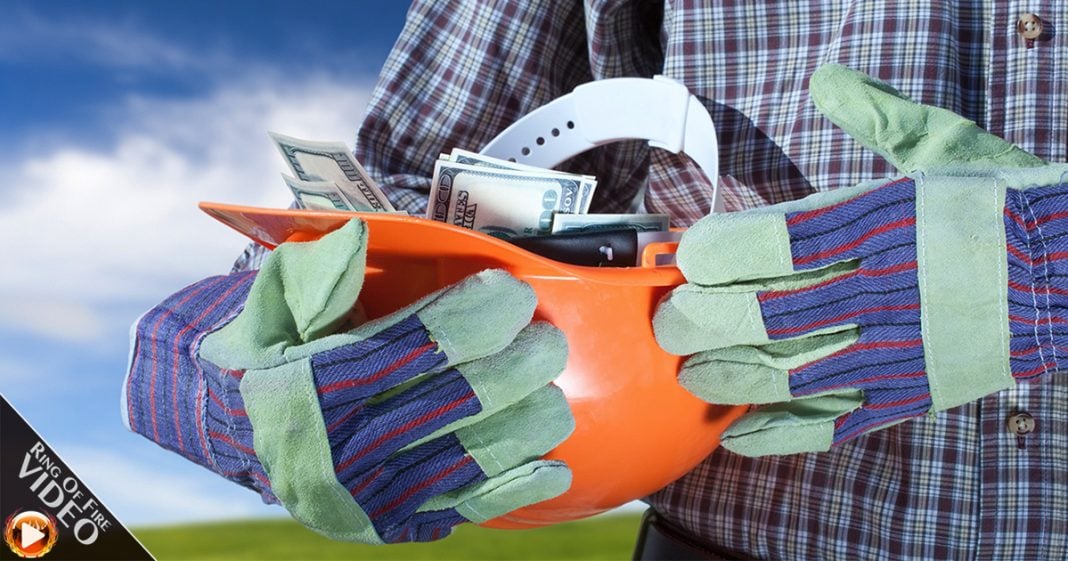 Tens of thousands of minimum wage workers from a range of industries – fast food, retail, and ride sharing services – have taken to the streets to fight for a living wage and the right to unionize. The fight for 15 is intensifying as workers prepare for an onslaught of attacks on labor and workers during the Trump administration. The Ring of Fire’s Farron Cousins discusses this.

In a bit of a more positive news story, which is something very rare that we actually get to talk about, the fight for 15 is heating up across the country. In New York City, tens of thousands of minimum wage workers took to the street Tuesday night to demand living wages, and many of them demanding the right to form a union. These workers came from all sorts of different industries. We had fast food workers. There were retail workers, ride-sharing workers from services like Uber, and on, and on, and on.

Think about this, when we talk about these people fighting for a $15 minimum wage, we can look at the evidence of all of the states, or cities, what have you, that have passed a $15 minimum wage. None of those cities are struggling. None of those companies went out of business. They’re thriving. Do you know why? Something I’ve said a thousand times, and I’ll have to say it a thousand times more until everybody understands it. Raising wages of low-income workers results in more money being spent in local economies. That is basic macro economics 101, folks. It’s something every college student is pretty much required to take their first year. That is how the economy actually works.

When you give low-income workers more money, they spend more money, not because they’re bad with money, but because they have to. They’re finally able to do the things that they weren’t able to do like have their car repaired, or go to the doctor, buy medicine, possibly every now and then, maybe every couple of months, go out to dinner, you know the things that the top 1% take for granted. Go get a haircut. You may not think so, but those are decisions that low-income workers have to make. I don’t have enough money to go get a haircut. I don’t have enough money to get my car repaired, even though it’s barely working. I can’t be without my car for a day, and I can’t afford a $700 repair. Those are decisions that these people face every single day, and a lot of people in this country who’ve never been in that situation don’t understand that.

I have. I know that all too well. I’ve been in that situation far too many times in my life, and I understand what these people are fighting for. They’re not fighting because they’re greedy. They’re fighting because they want everybody to be able to afford to make these decisions, to not have to stress out if you blow a tire on the side of the road, not think about how well, that means there’s no Christmas this year, because for a lot of families in America, that’s what that means. Something as simple as having to replace a tire, or having to go buy an asthma inhaler for your kid that costs $150, even if you have insurance. Those are decisions that low-wage workers have to weigh, because they can’t afford them, and it’s because of the capitalistic system that we’ve designed, that we tell employers that hey, eight bucks an hour, eh, you can stick with that. That’s fine.

Yeah, we know it’s well below the poverty line, but don’t worry about it. Things are only going to get worse when Donald Trump gets sworn in. We know he is an enemy of labor unions. We know that he has personally said that he’s fine with abolishing the minimum wage, and that’s why this fight taking place right now is so important. We have to change the laws before Donald Trump gets in office and tries to change them nationally. State by state, city by city, that’s how we’re going to win this fight, and I applaud the people out there in the streets of New York City fighting for all of us.