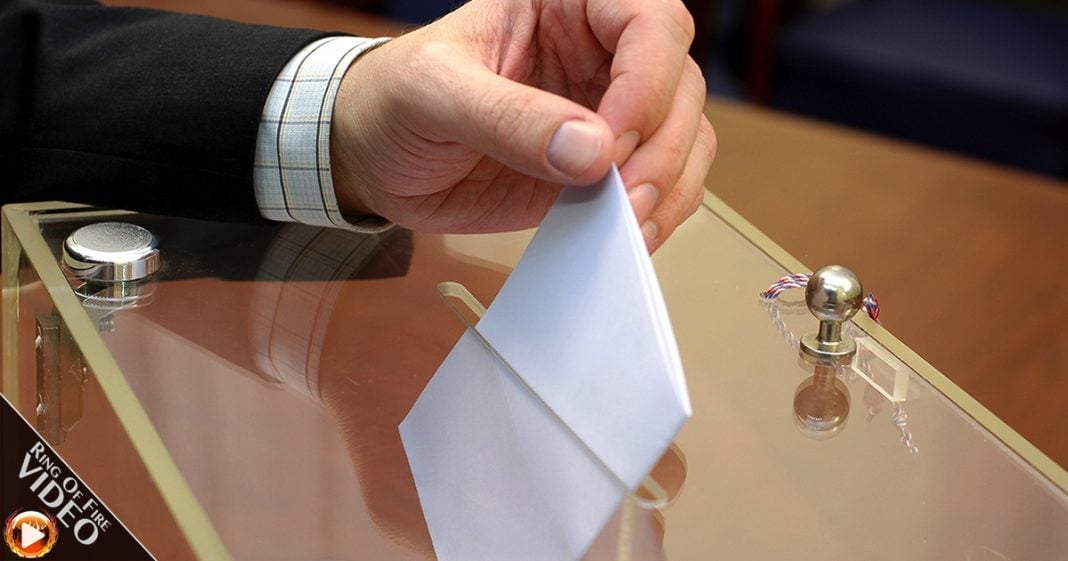 While Donald Trump is making bogus claims about voter fraud, the issue of voter suppression is going largely ignored. And THAT is the real threat to American democracy. The Ring of Fire’s Farron Cousins discusses this.

Well, Donald Trump and Republicans, Republican conspiracy theorists, are out there telling us that millions of illegal immigrants voted for Hillary Clinton, a fact that is not supported by any kind of fact, statistics, numbers, evidence, or anything. There is actually real problems with the United States voting system that must be addressed, but unfortunately right now the Republican Party is trying to distract us by saying that illegal immigrants are voting. The real problem is the number of people in the United States who were not allowed to vote. Those are the people that easily could have swung this election, had Republicans not been working for the last 20 years to make it harder for them to even cast a ballot. Here’s what I’m talking about. States like Texas, Pennsylvania, North Carolina, Ohio, all of these states, city by city in some of them, had some form of photo ID law or other law in place to prevent minorities, liberals, from getting to vote. Now in each one of these instances, courts had struck down these laws and told these places you are not allowed to do this. It’s illegal. It’s unconstitutional. Your law is officially thrown out.

So what happened on election day? They still did it. They still requested and required a photo ID for these people. That’s illegal, so there was illegal voter suppression taking place on election day in the United States. We have a sore loser, little whiny President-elect that wants to complain about the fact that he didn’t win the popular vote, so it must be the illegal immigrants. We have real problems with our democracy right now, the very foundation of democracy, which is the right to vote. Republicans aren’t doing anything about it. Don’t get me wrong. Democrats are doing only slightly more than Republicans on the issue. Bernie Sanders was big on it when he was campaigning. Hillary Clinton’s campaign actually did a decent amount to get these photo ID laws overturned while she was campaigning. She didn’t do it while she was in office, but she did it while she was campaigning. So, there’s that, but other than that nobody seems to care. We want to live thinking that illegal immigrants are voting. Republicans want to tell us that voter fraud is a huge problem, even though the only instances of voter fraud from the 2016 election were from Republicans. There is no evidence as of right now to suggest that any Democrat voted illegally in the United States this year. None.

Now maybe that’ll change, if we go through these recounts, if we have full-scale investigations of every single human being that cast a vote, but right now there’s none. There’s two instances, both of them Donald Trump supporters, Republican party affiliated. That is where voter fraud takes place, within the Republican Party, but they don’t care about that. They don’t care. Donald Trump went as far as suggesting it in the state of Colorado during the campaign. We have a very real problem of minorities not being allowed to vote in this country, and that’s by design. The Republican Party put those laws in place specifically to prevent African-Americans from voting. The North Carolina GOP explicitly said that this year. They were thrilled when African-American voter turnout had fallen in their state. They were thrilled, because they knew that those were fewer votes going to the Democratic Party and Hillary Clinton. Donald Trump can whine on Twitter all he wants about voter fraud, but the real problem is oppression and suppression and that’s what the Republican Party represents. That’s what Donald Trump represents, and that is something that we have to fight against unless Democrats want to continue losing every single election from here to eternity.