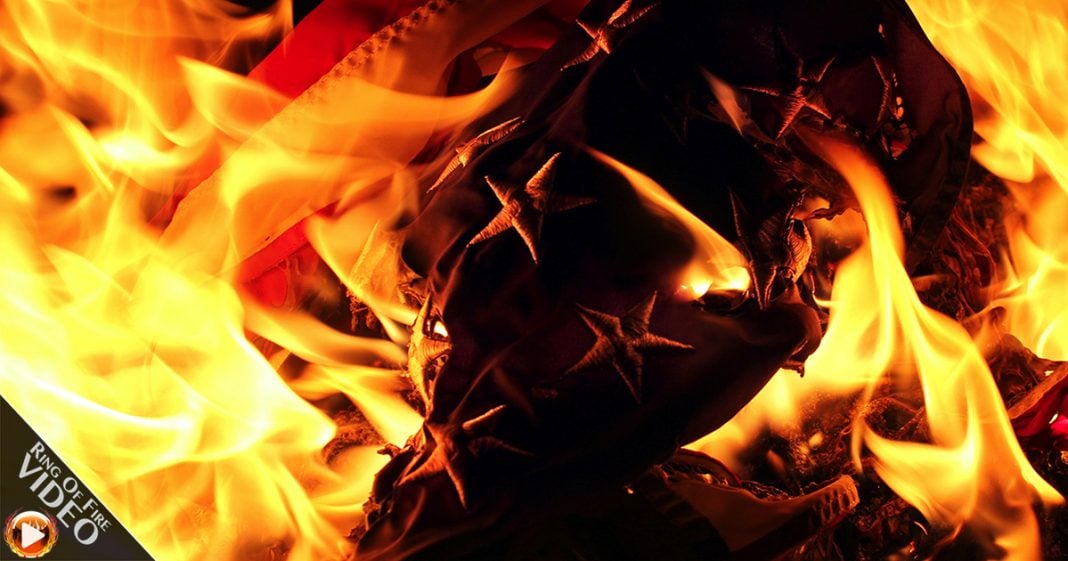 Donald Trump knows absolutely nothing about the law or the U.S. Constitution, and his latest Twitter rant against flag burners proved how dangerous he’ll be once he takes over the White House. The Ring of Fire’s Farron Cousins discusses this.

Donald Trump knows absolutely nothing about the United States Constitution or the basic laws of the United States, and that’s what makes him so dangerous as a person that’s about to take over as the most powerful human being on the planet. Here’s what I mean. Earlier this week Donald Trump tweeted out that, ‘Hey, maybe we should take flag burners and either throw them in jail for a year or strip them of their US citizenship.’ Now as most of us who’ve paid any attention in school know, flag-burning is a protected form of free speech under the First Amendment of the US Constitution. That’s it.

Flag-burning is protected speech according to the US Supreme Court. In 2005, there was a bill going through Congress which Hilary Clinton actually co-sponsored that would have put a ban on flag-burning. Legislation was unsuccessful even though Republicans controlled both houses and the White House. They said, ‘We’re not going to touch it. It’s unconstitutional.’ We’ve already been told that. Donald Trump knowing nothing of American law, knowing nothing of American rights, tweets this asinine tweet saying that he wants to throw them in jail.

Now Trump as president would have the authority to issue an executive order on the issue, the Supreme Court could then overturn it if they felt so inclined, likely wouldn’t happen. Here’s the thing that gets me about all this. I love how Republicans like to accuse liberals of being the whiny little babies about everything like, ‘Oh, you’re so over-sensitive about things.’ You guys want to throw people in jail for burning a piece of fabric. You can’t get more petty and whiny than that. Just because a piece of fabric has a certain pattern on it, it’s illegal in your minds to burn it?

Do whatever kind of protest you feel is right for you. If it includes burning the American flag, if you feel that’s right for you, you’re protected to do that. But the Republicans to claim that liberals are the whiny ones, again, it’s a piece of fabric. Relax. You’re not burning your flag, so what does it matter? You probably don’t even have a flag, so relax, and worry about the fact that the president you elected is trying to strip away our constitutional rights starting with the First Amendment. I’m sure all you Republicans know what comes after the First Amendment. Just remember, that’s the next in line under this idiot president that you put in office.