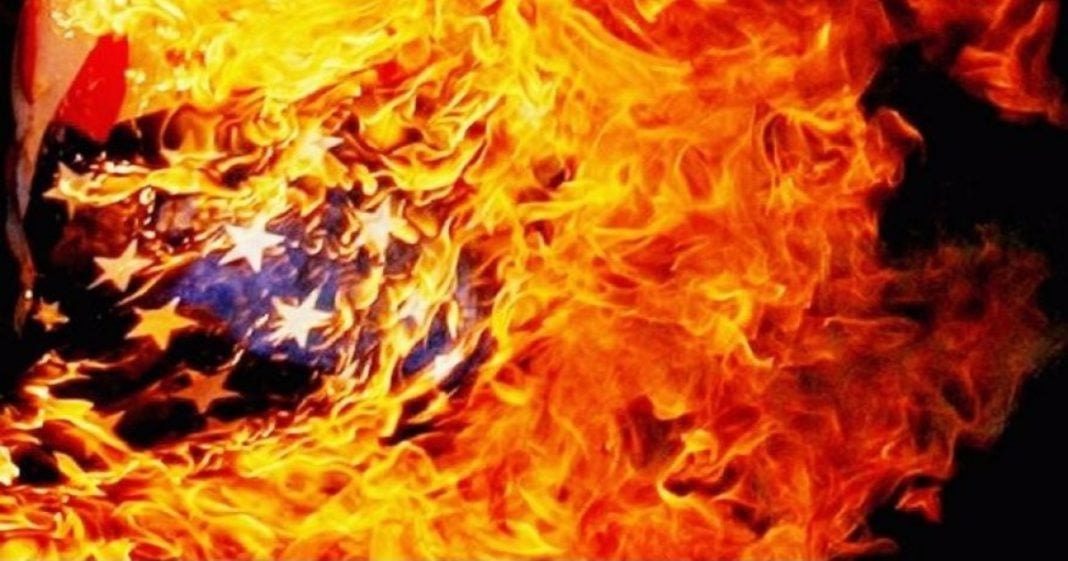 On Monday evening, Donald Trump sent out one of his most dangerous statements yet in the form of a tweet in which he said that those who burn the U.S. flag should lose their citizenship or their freedom.

Nobody should be allowed to burn the American flag – if they do, there must be consequences – perhaps loss of citizenship or year in jail!

Currently, flag burning is protected under the first amendment – after all, it is just a piece of star-spangled fabric. Though many people take great offense to the action of a burning flag, it is not and should never be a crime.

No doubt, many of Trump’s supporters will applaud this unconstitutional threat. After all, they once heard about some liberal yahoo burning an American flag and it made them sooo mad! So why not make it illegal? Then those ungrateful liberal commies can leave the country they so clearly hate, right?

It may start with the criminalization of a burning flag, but that is merely the beginning for Fuhrer Trump. If Trump can make the population accept this violation of the constitution on the grounds that it appeals to some Americans’ emotions, it certainly won’t stop there.

Trump can begin to criminalize other activities he is not in favor of, like protesting peacefully, participating in anti-Trump conversations online, and publicly opposing the rulings – I mean, decisions – of the sitting president.

Do you see where this is going?

So yeah, burning the U.S. flag is a serious bit of political speech, and many are deeply offended when it is done, but that does not mean that it is in any way a crime.

That’s the beauty of the freedom of speech and expression – there are virtually no limits to what can and cannot be said. Outside of shouting “fire” in a crowded theater, one of the largest tenets of Democracy is the ability to express yourself – even to vehemently disagree – with whatever and whomever you desire.

As Martin Niemöller once said in reference to the atrocities happening in Europe during the Holocaust,

First they came for the Socialists, and I did not speak out—
Because I was not a Socialist.

Then they came for the Jews, and I did not speak out—
Because I was not a Jew.

Then they came for me—and there was no one left to speak for me.