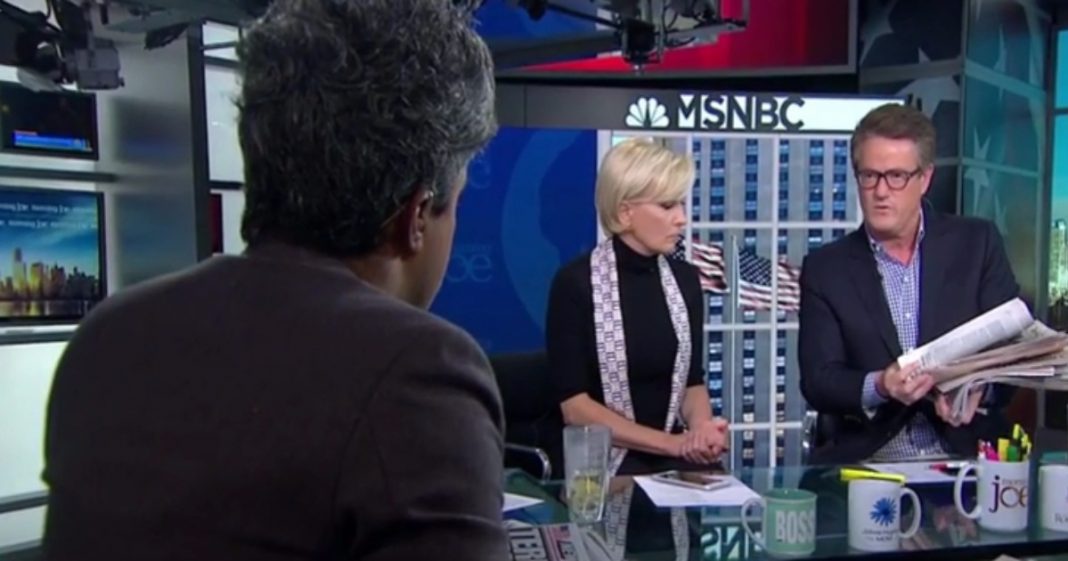 That’s easy for him to say!

During an interview on Tuesday morning on MSNBC’s conservative Trump-TV show “Morning Joe,” a person of color was repeatedly silenced as he tried to express the fear and anxiety experienced by people like himself concerning Trump’s dangerous rhetoric.

Commenting on a tweet Trump sent this morning which declared that burning a flag should guarantee a prison sentence or the revocation of cititzenship, NBC contributor Anand Giridharadas argued that Trump’s steps toward controlling his citizenry smack of fascism and are rightfully frightening to those who oppose him.

Host Joe Scarborough, ever the Trump loyalist, jumped to attack Giridharadas on his points, telling him that his fears and concern are irrational.

Only the most corrupt, Trump-loving pundit would argue that Giridharadas’s comparison wasn’t apt – what else do you call a man who wishes to infringe on the basic freedom of speech and political expression?

But for his valuable commentary, the only thing Giridharadas received in return was a whitesplaining Scarborough who was only too eager to dismiss the pundit’s anxiety as hysteria and irrationality.

“You’re not being rational now.”

Giridharadas replied, “I’m not being rational for taking the president-elect at his word?”

And that’s exactly the issue here: Scarborough and other lock-step Republicans like him want us to pretend as if Trump’s language, as if every single tweet and comment made offhand, somehow doesn’t matter.

The president-elect advocates for the violation of basic rights and the only thing Scarborough has to say is, “but Supreme Court”?!

If you want to call someone out on fear-mongering like Joe would like to do of Giridharadas here, you have to recognize that the number one person using fear tactics is the big guy at the top.

Pointing out Trump’s dangerous rhetoric is not the mistake here, and anyone who tried to argue that it is is purposefully and insidiously attempting to aid Trump in his anti-Democratic goals.

The juicy bits begin at the 11-minute mark, though the entire interview is a fascinating study in subversive, anti-Democratic commentary.