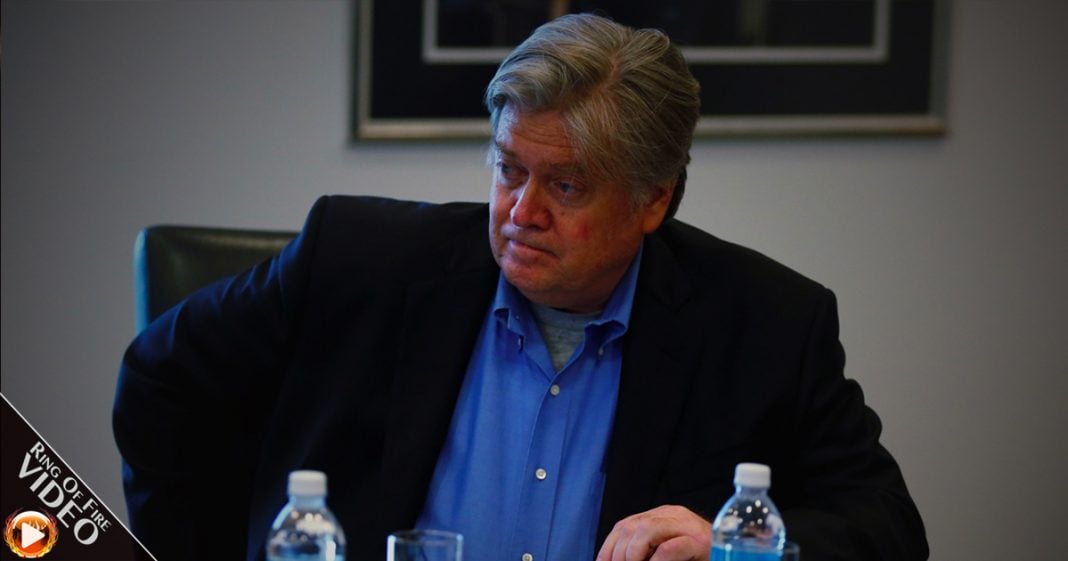 Steve Bannon, Donald Trump’s chief strategist, once suggested that it wouldn’t be a bad idea to strip African Americans of their right to vote. Welcome back to the 1700’s, America.

A woman by the name of Julia Jones, who cowrote a documentary about Ronald Reagan called In the Face of Evil with Steve Bannon, Donald Trump’s chief strategist at this point, has come out publicly and said that at one point Steve Bannon, Donald Trump’s chief strategist said that, ‘You know what? Might not be a bad idea to limit the voting rights of black people in the United States.’ Now, we’ve talked in the past about the racist, anti-Semitic, sexist tendencies of Steve Bannon, but this one goes even further, because this is something that with his new position of power he might be able to pull off. He wanted to limit access to voting for people in the United States based on their race. Steve Bannon wants to take us back to the 1700s and halfway through the 1800s. He wants to take away the right to vote from black people. That is not an overstatement. That is what Julia Jones, who cowrote this documentary with him, has said.

Look, we are past the election. Donald Trump won. He’s picking all these racist and just this basket of deplorables to run his administration, and Steve Bannon, right there on the top, probably the worst of the bunch, has a direct line right into Donald Trump. Donald Trump doesn’t know what the hell he’s doing. Steve Bannon does, so when Steve Bannon says, “Hey Trump, do this,” Trump will do it. That’s what is so terrifying about this. I mean, it is very likely that we could be seeing some sort of curtailing of the right to vote in the United States, especially with these recount efforts. Donald Trump is getting pissed off about those. He’s claiming undocumented immigrants are voting for Hillary Clinton. We are so close to seeing the reversal of 150 plus years of voting rights advances under the Trump administration. The only thing that’s going to serve to do is give Donald Trump another term, keep the Republicans in control of the House and Senate.

Steve Bannon wants to take away the right to vote from black people, and I cannot say that enough, because that is a terrifying thought, and this man actually suggested that, thinks it’s not that bad of an idea. Again, that will only serve to keep Republicans in power indefinitely, because a Democrat won’t get elected without minority voters, and so they’ll never be able to overturn whatever damage Donald Trump does if we keep perpetuating the Republican cycle. We are at a point in our democracy, a point in the United States’ history, the present I guess, where we have to fight back. We have to stop this madness. We have to stop this madman and his basket of deplorables from turning our country into what it was 300 years ago. Nobody wants to go back to that.

Republicans, some of them obviously do. They don’t want black people to vote. They don’t want women to vote. They don’t want anybody coming into the United States, even though that’s pretty much how the United States became the United States. They just want it to be white guys, rich, wealthy, white guys who kind of own the rest of us. That’s what the Trump administration is already trying to put us back to, and they haven’t even taken office yet. Donald Trump’s chief strategist, Steve Bannon, suggested that it’s not a bad idea to take away the right to vote from black people. I want everybody watching this to tell someone that sentence today. Tell them to go tell someone else. It is true, and this is a man who is about to have a huge position of power in Washington DC.