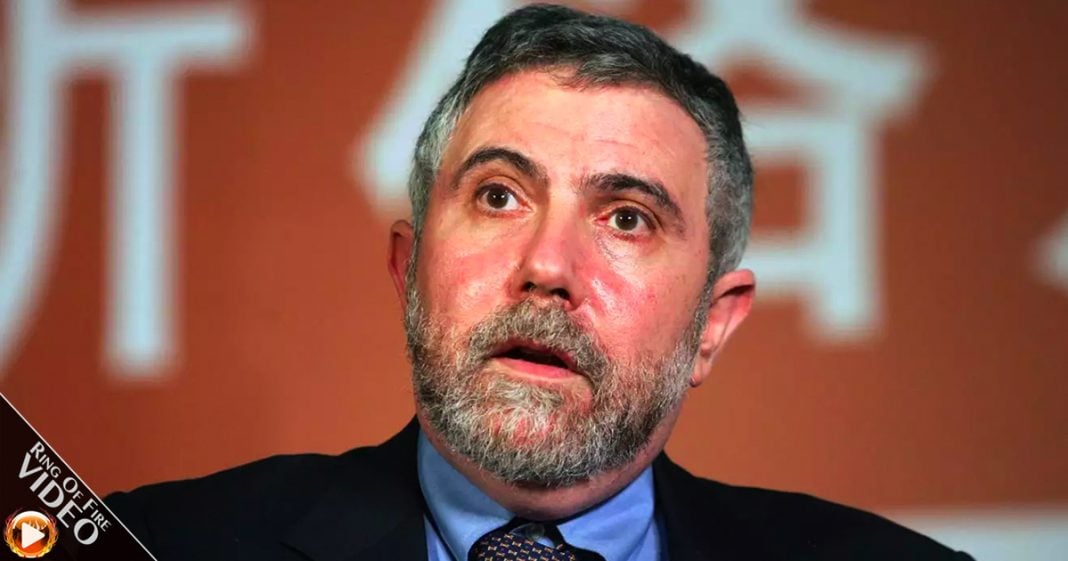 Paul Krugman – a man that has won a Nobel for his work in economics – has suggested that Democrats don’t need to appeal to working class voters because they just seem to vote for Republicans anyway. Krugman obviously doesn’t realize that the Democrats are losing working class voters because they aren’t actually talking to them about the issues. The Ring of Fire’s Farron Cousins discusses this.

Paul Krugman, a Nobel Prize-winning economist, was once seen as probably one of the smartest people in the United States. Had a ton of respect, could call economic things before they even happened. Really smart guy, absolutely brilliant, but that was many years ago. Today, Paul Krugman has completely lost touch with reality, and here’s why I say that. In a recent column for the New York Times, Paul Krugman says that, hey, there’s no reason for the Democrats to try to reach out to the working class voters who overwhelmingly went to Donald Trump. There’s no reason, forget about them. They’re old news.

Here’s why he says that. He says that even though the Democratic Party is the one that actually fights for working-class Americans, they still ended up voting for Hillary Clinton. Excuse me, they still ended up voting for Donald Trump and Republicans, so they don’t get it, they don’t care. Well, no, Paul Krugman. According to fair.org, you’re absolutely wrong because you’ve misunderstood the equation itself. You didn’t put in all the variables. In only 9% of Hillary Clinton’s ads that ran during this campaign season did she ever talk about the working class. In Donald Trump’s ads, more than 25% talked about the working-class Americans and trade deals and things like that. Yeah, he’s blowing smoke, but he talked about it, and that’s something I have said since the beginning.

Hillary Clinton didn’t talk about issues. She didn’t go out there and appeal to the working class or tell them how she was going to do things and help them. All she did was say, ‘Vote for me because the other guy’s nuts.’ That’s not how you win elections, and Hillary Clinton proved it. She ran a horrible campaign. She was a bad candidate, and that’s why she lost. That’s why she lost the working class. They liked Bernie Sanders because he was out there talking about the issues that they actually cared about, their own pocketbooks, how they were going to continue to put food on their table, how they were going to afford pharmaceuticals.

Hillary Clinton didn’t do that, Paul Krugman. If you ignore those facts, then, yeah, why pander to the working class? When you actually go out there and tell them how you’re going to help them, they can follow you. Hillary Clinton didn’t stand on the shoulders of the Democratic Party and say, ‘Look what my party has done for you over the years.’ All she did was stand up on the Party’s money and say, ‘This guy is crazy. You should vote for me.’ Doesn’t cut it. Doesn’t cut it, and as horrible as Donald Trump is, Hillary Clinton deserved to lose this election because of the horrible campaign she ran.

Don’t get me wrong. I wish anybody but Donald Trump would have won, but you’re up against the easiest opponent ever, you’re standing on decades of Democratic Party accomplishments for the middle class, for the working class, and you can’t go out there and even mention it. You’re spending millions of dollars just to tell people that ‘I’m better than him because of his character.’ You didn’t tell Democratic accomplishments. You didn’t tell union support and how you’re going to work with unions and help unions and expand unions and expand jobs in this country and that your husband should have never passed NAFTA because it was bad and you’re going to undo it and bring some jobs back.

You didn’t say any of that, Hillary, and Paul Krugman should know better. Again, the man won a Nobel Prize because of his brilliance in economics. Maybe that’s where we should draw the line with Paul Krugman. Any time he talks about something that’s not economic only, ignore him. He has called it wrong from the start in this 2016 election, and he’s done. He’s aging, he’s getting old. His mind isn’t what it used to be. Look, I used to have tremendous amount of respect for this man.

That’s the difference. You can’t just say to abandon them. How about say, ‘Go out there and talk to them.’ Print out a list, a list of everything the Democratic Party has done for the working class, and then print out a list of every horrible thing that the Republicans have done to the working class. Just take those two lists. Just cut it down to two pieces of paper and say, ‘Here, here is the proof. Here is the evidence. I am fighting for you. They are not.’ That’s it. That’s all you have to do. You don’t abandon them. You reach out and explain things to them. That’s the only way the Democratic Party is going to win in the future, but they will never do it if they take advice from has-beens like Paul Krugman.