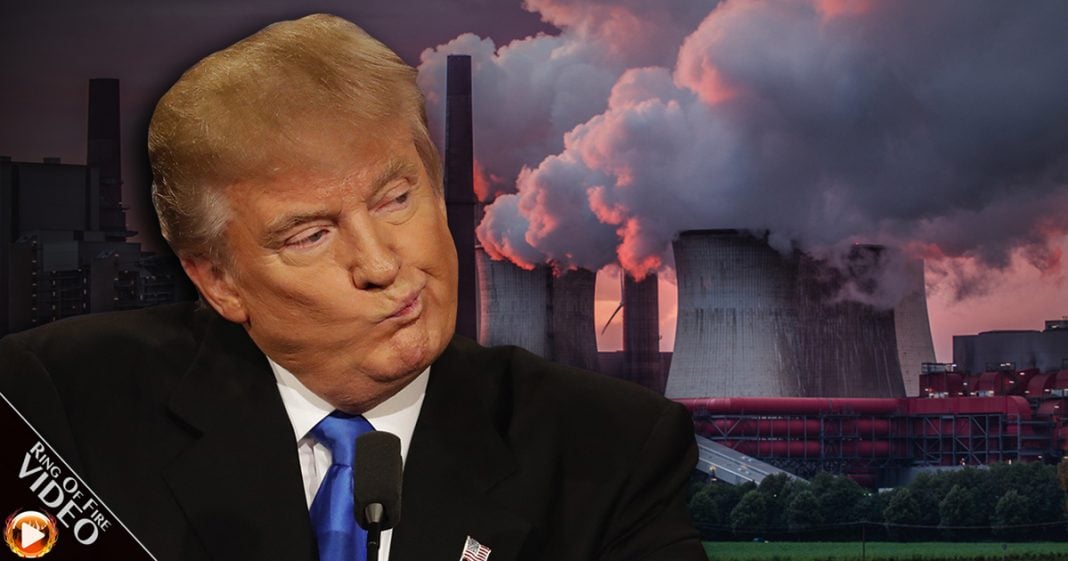 Donald Trump told the New York Times recently that he has an open mind about climate change, but that he still believes climate science is a “bunch of bunk.” Get ready for another 4 years of climate inaction. The Ring of Fire’s Farron Cousins discusses this.

According to a recent interview with the New York Times, Donald Trump said that he is open to the possibility that there may be some connection between human activity and a warming environment. Although he still remains skeptical, he considers climate change to be a bunch of bunk. Okay, so, he gives this interview with the New York Times, an organization that he hates, that he constantly rails against on Twitter. He goes out there and says, ‘You know what? I have an open mind.’ That’s what he said, ‘I have an open mind and maybe there is something there with the climate change but overall I think it’s BS.’

We’ve reached the point in human history where we cannot risk another year, another two years, another four years of climate inaction. The city of Miami in South Florida is experiencing flooding, not from rainfall, not from anything else other than rising sea levels during high tide. There’s been reports of sea life ending up in parking garages due to these rising flood waters. This city, Miami, a huge, huge city in the United States is literally sinking right before our eyes and our president-elect says that hey, he’s got an open mind about climate change.

Don’t worry about it, maybe, maybe not. He’s appointed nothing but climate change deniers to his cabinet and the only time he’s ever acted like he cares about anything like rising sea levels is when it threatened his golf course, so he put up a sea wall and that’s what we can expect from Donald Trump on the issue of climate change and on pretty much any other issue out there. If it directly threatens his financial security, he will act on it. If it directly benefits him financially, he will act on it.

He cares about himself, his money, his life, his future, his wealth. That is what Donald Trump stands for and there were enough people in this country, stupid enough, to be conned by this man even though the truth was out there, his history, his life history, his corporate history was out there. They could have looked it up, they chose not to because hey this guys sounds kind of like a populist. You screwed us, is what you’ve done, Trump voters.

You’ve screwed us economically and even more importantly, environmentally. We will get no climate action for the next four years. Republicans control everything at this point. Now that could change in two years but we’ll still have a President Trump and if something happens and he gets impeached, well shit then we got President Pence. Nothing good will happen until this idiot and his idiot vice president are out of office and a lot can happen in four years when we are talking about rising sea levels and climate change.

When we are talking about another four years of carbon build up in the atmosphere with absolutely no action and it’s not just staying pace, it’s increasing that because the people that Donald Trump is toying around with putting in charge of our energy and interior are all proponents of drill, baby drill, including Sarah Palin herself. We are talking about increasing emissions, increasing warming, increasing the speed at which our sea levels are rising, at a time when the entire rest of the planet is trying to take action, the United States is moving backwards.

That is not to say that President Obama has been better, but at least he actually understands that the science is conclusive on this issue. Donald Trump hasn’t even gotten to that part yet and thinks that we need to exploit every single source of dirty energy that the United States has and once we run out, let’s go take everybody else’s oil and that’s what we get from a Donald Trump presidency.