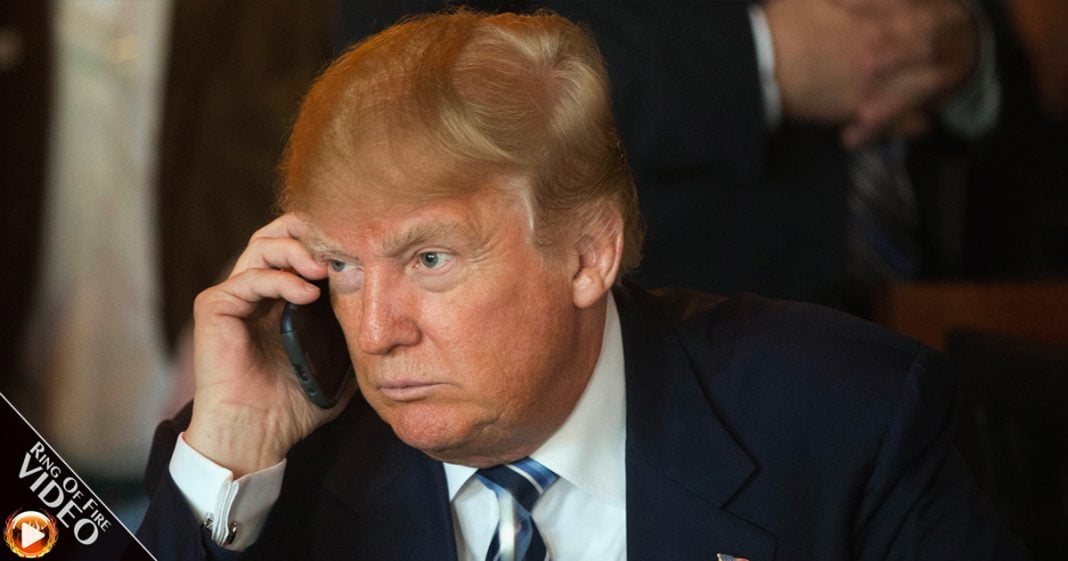 Donald Trump claims that millions of illegal immigrants voted for Hillary Clinton. If this is actually true, which it isn’t, wouldn’t that mean that we should have a nationwide recount? The Ring of Fire’s Farron Cousins discusses this.

Over the weekend, Donald Trump did what he always does and he got on Twitter and said some really, really stupid, dangerous things. Except this time, his little tweet storm was a little bit more dangerous than it was stupid. Donald Trump claimed over the weekend that millions of people voted for Hillary Clinton, but those people were undocumented, illegal immigrants. Millions of illegal votes to Hillary Clinton according to Donald Trump. Absolutely no evidence whatsoever to support that claim, but Trump made the statement in response to the recount efforts taking place in some Midwest states right now. Here’s the bottom line, what we have here. Donald Trump, the President-elect, is now questioning the validity of the election that he actually won and making these outlandish claims that are only going to get his base a little more angry and violent towards immigrants. No illegal, undocumented immigrants voted for Hillary Clinton. In fact, the only instances of voter fraud or attempted voter fraud from the 2016 election were from Donald Trump supporters. Those are documented, at least two of them and they were both for Donald Trump.

Like I said, this is more dangerous than stupid. Donald Trump knows exactly what he’s doing right now. He is trying to delegitimized our democracy. He’s trying to lay the groundwork for his deportation plans saying that these illegal immigrants are voting for Hillary Clinton for president and that should give us grounds to ship them out of this country, which is completely untrue, but that’s what he’s doing. He is a very calculated man in some regards and this is one of those instances. Yeah, he’s on the tirade because he’s mad about the recounts, which, unfortunately, are unlikely to change the election results, but he is trying to lay this framework, so that he can deport millions of immigrants in the United States, so that he can get his base riled up so that they support his mass deportation plan and so that in the future people always think that it’s the Democrats out there committing voter fraud even though that is not the case and there is no evidence whatsoever to support any of the claims that Donald Trump is making here.

This is a dangerously unhinged human being who is about to have access to thousands of nuclear warheads. He is about to have access to the entirety of the U.S. Military. He is about to run the United States. We should be scared. First, it was look this is going to be a bad four years. At this point, we could be looking at a fight for survival and I don’t think that’s an overstatement at all. If Donald Trump is as unhinged as a president as he is on Twitter or as he was during the campaign, things are going to get very ugly in the United States or they’re going to get very ugly overseas. Donald Trump has no filter. He just says these things and, unfortunately, for his crazed base they actually work. This tirade about illegal immigrants voting for Hillary Clinton is working for Donald Trump. His base, honest to God, believes it. They think that millions of illegal immigrants went and voted for Hillary Clinton just because Donald Trump said they did. They don’t need evidence. They don’t need proof. He said it, it must be true. That’s the scarier part, the base.

It’s bad enough that we’ve got a guy about to take over the White House who’s dangerous enough to say these things, we have millions of people in this country dumb enough and crazy enough to believe them. Those are the people that we have to look out for. There’s only so much damage a president can do. He’s got the House, the Senate, the Supreme Court right there that if he gets too crazy, they’re going to keep him in check. It’s those Trump voters, that Republican base, those are the people that we’ve got to be on the look out for. We have already seen it happen. More than 400 hate crimes since the election of Donald Trump, and I can promise you, unfortunately, as long as Donald Trump keeps saying dangerous things like this, we’re going to see a lot more instances of hate crimes and violence against people of color, immigrants, everyone that these people think or have been told by Donald Trump that they’re the enemies. That’s who we have to look out for, is the Republican base, because that is the real threat to our democracy.