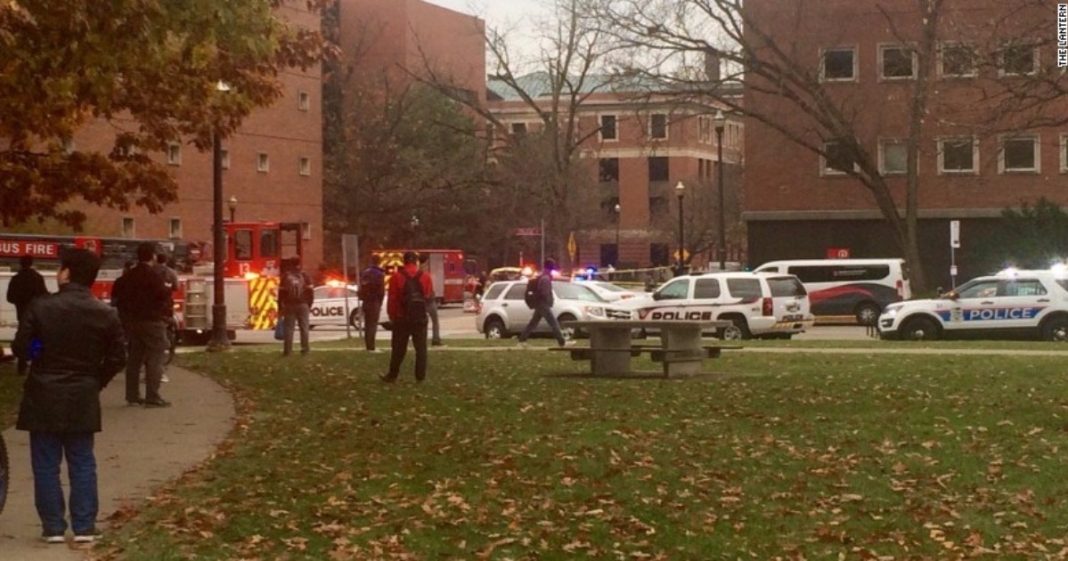 Ten people are in the hospital today after an unnamed attacker set out to cause harm on the Ohio State University campus Monday morning.

Though initial reports called the attacker an “active shooter,” the anonymous man had no gun and instead drove into a crowd with a car before attacking others with a butcher’s knife.

Students and faculty were ushered outside by a blaring fire alarm shortly before the attack – the alarm appears to have been unconnected from the attack and was a legitimate alarm. While the students milling around waiting for the all-clear, the suspect drove into the crowd. Many thought it was a tragic accident and rushed to the scene to try to assist when the saw the attacker swinging an odd-looking knife.

Reports which claimed the man had a gun were likely due to reports from students who said they heard gunshots. As it turns out, the 3-4 gunshots came from the officer which took the attacker down, killing him.

OSU’s emergency management was one of the first to report to the world the ongoing violent situation at the university, where they referred to the event as an “Active shooter on campus.”

Initial reports said that a single shooter was at-large, then, as is usually the case, a second shooter was inaccurately reported. Finally, it was discovered that the suspect – a single attacker – was killed by police.

After the lockdown was ended and students were cleared to leave their places of shelter, the university reported that the suspect was killed.

“A suspect has been shot and reported deceased. Victim injuries include stab wounds, injury by motor vehicle and other injuries that are being evaluated.”

Of the 10 victims hospitalized, nine are stable while one is in critical condition.