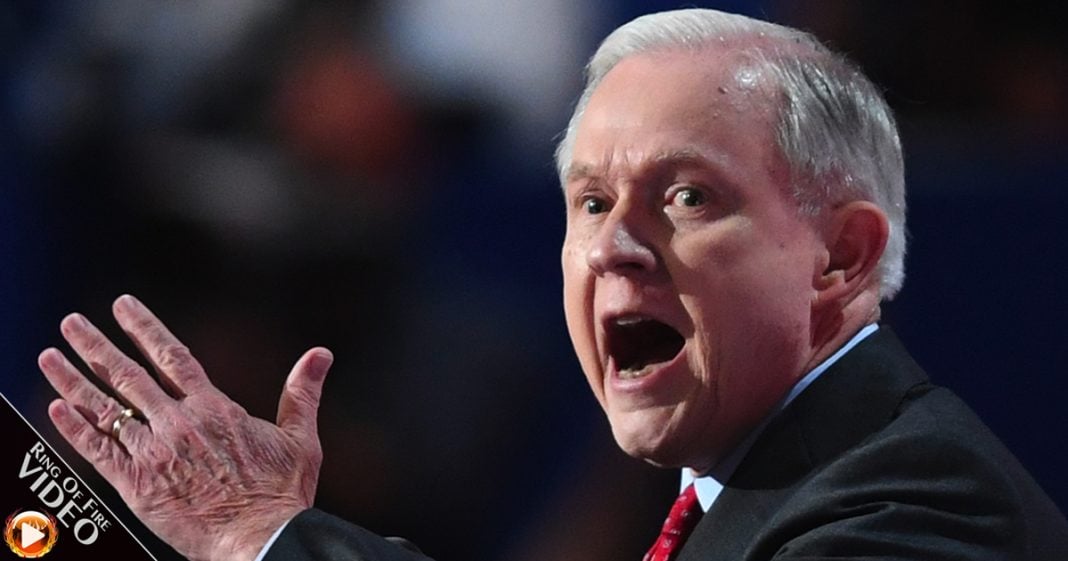 Alabama Senator Jeff Sessions was the first Senator to endorse Donald Trump, and he’s being rewarded by being picked to be the new US Attorney General. This is a man that was deemed “too racist” by his own Party in the 1980’s when he was nominated for a judgeship. The Ring of Fire’s Farron Cousins discusses this.

Donald Trump continues to appoint some of the worst people in the United States to very prestigious positions of power. The latest appointment, or I guess you would call it a nomination, is Alabama Republican Senator Jeff Sessions to be the next US Attorney General. That would still have to go through confirmation. However, considering the fact that the Republicans control everything, it’s likely he’s going to make it through … Or is it?

Now, Jeff Sessions is a guy who in the 1980s was deemed too racist, by his own party, to be confirmed for a judgeship to which he was appointed. They rejected his nomination in the 1980s. Unfortunately, today the United States is a hell of a lot more racist, especially the Republican party, than they were 30-40 years ago. Again, it is likely he will make it through. The specific incident that Republicans in the 1980s were upset about was the fact that Jeff Sessions referred to a black attorney as “boy,” and said that a white attorney who represented black people was a traitor to his race.

Jeff Sessions was the first sitting senator to come out publicly and endorse Donald Trump, so this nomination for Attorney General is clearly payback for being such a loyal Trumpite all of these months. Jeff Sessions is a dangerous, dangerous human being. He believes that CO2, it can’t be pollution because it’s plant food. I mean, this guy has a sixth-grade level of understanding of science.

The list goes on an on with some of the horrible, horrible things he’s done. He opposes same-sex marriage, staunchly pro-life, heavily endorsed by the NRA. He is a budget hawk, he is a war hawk, he doesn’t believe in protecting the environment, and he’s just a flat-out racist human being. Here we are just a couple weeks past the election, and we’re watching this Trump transition team become one of the most ardent racist organizations in the United States. This is not something that is okay. This is not something that should be acceptable to any American citizen.

Jeff Sessions was rejected by his own party because they knew exactly what kind of a human being he was and they didn’t like it back then. Unfortunately, again, the Republican party has devolved so much in those 30 years that Jeff Sessions is now the norm. He is what Republicans are today. Yeah, they don’t mind calling black people “boy” or saying that white people are traitors to their race if they’re not a member of a pure blood society.

This is getting disgusting, and I can promise you from here, as a lot of other people have also said, it is only going to get worse.