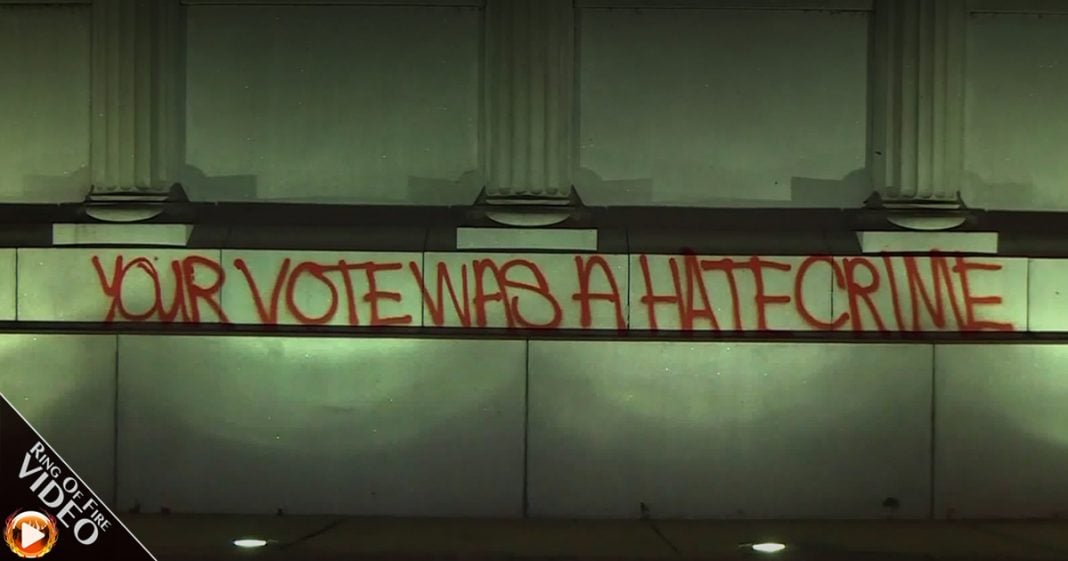 The number of hate crimes that have taken place in the United States has risen dramatically since the election of Donald Trump, and those numbers don’t appear to be slowing down anytime soon. This is what happens when you “normalize” hate. The Ring of Fire’s Farron Cousins discusses this.

The Southern Poverty Law Center located in Alabama, which kind of tracks/monitors hate crimes all over this county. They’ve been doing phenomenal work for decades now. They have reported that since the day after the presidential election there have been well over 400 incidences reported of racial intimation, harassment and abuse. Since election day. This is a massive, massive spike being reported from an organization that has been tracking these things, again for decades. The evidence is very clear, this is related to the election of Donald Trump. To the normalization of hate, because that’s what Donald Trump truly represents. You know, the day after the election a lot of the Republicans were saying this wasn’t about race. You even have some Democrats saying, oh stop, you know, saying it was about race, it was about the middle class. It absolutely was about racism, it absolutely was about racism.

Look at who Donald Trump is putting in his Cabinet. It’s racist, it’s sexist, it’s anti-Semites. You can’t tell me that this isn’t about racism. Look what the Southern Poverty Law Center is reporting about Donald Trump supporters going out there spray painting swastikas saying this is white American now. Or saying, you know, going into a Starbucks and getting mad because your order is taking too long and saying, I’m a white guy I voted from Trump I shouldn’t have to wait for a coffee. Those things are happening in America right now. More than 40 incidents a day since the election of Donald Trump and the idiot hasn’t even taken office yet.

We’ve normalized hate, we’ve normalized extremism, we’ve normalized racism, and sexism and everything that goes along with Donald Trump. And we knew it. I mean, look, I’m assuming 99% of the people watching this video did not vote for Donald Trump, you voted, probably for Hillary or Jill Stein, and that did not help elect Donald Trump, either of those. The numbers show it. But we also have to take responsibility for the collective us. We are a country, we are united, we are all United States citizens. We didn’t vote for him, but that’s still on our shoulders, because we can fight back, and we have to. We cannot allow this to become the new normal of the United States. We cannot allow this to be the image that the United States projects to the rest of the world.

The United States was once the most revered, most respected country on the planet. George W. Bush screwed that up. Obama spend eight years trying to fix it and he did a damn good job of trying to fix the image, and Trump, even before he takes office has destroyed it. The rest of the world is looking at America right now as if we’re all a bunch of country bumpkins with two teeth sitting on a front porch, bitching about black people and latinos, because that’s what Trump did, and that’s the image that the rest of the world has of the United States right now.

We can fix it, but that’s gonna take a lot of work considering how energized the white supremacist and the sexists in this country truly are today. That is 100% because of Donald Trump.