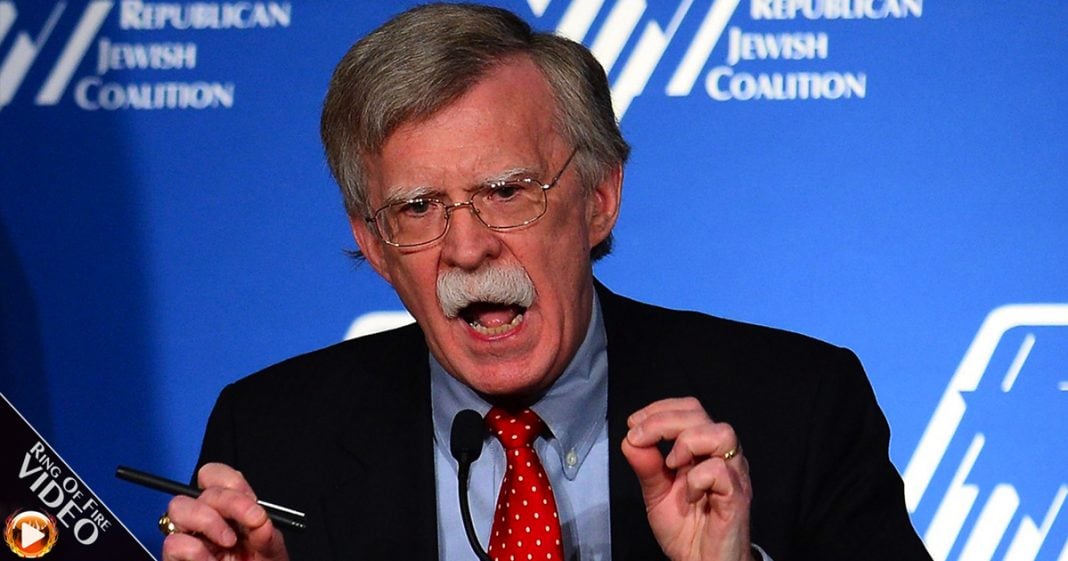 John Bolton could very well be the next Secretary of State, and he’s already saying that we some old fashioned “regime change” in Iran – I guess he forgot how the last “regime change” scheme the United States tried to pull ended. The Ring of Fire’s Farron Cousins discusses this.

John Bolton, the former Ambassador to the UN under George W. Bush, is very likely to become the next Secretary of State for the United States, replacing John Kerry as Donald Trump comes into office. This man, John Bolton, still defends the decision to invade Iraq. He has called for the UN basically to be abolished, thinks that the United States should not be a part of it, and that’s actually what gained him his UN ambassadorship from George W. Bush because the Republicans hate the United Nations.

But here is what’s even more scary about this guy. He is out there right now, saying that the only way to really fix things in the Middle East is that we have to have regime change, those are the words he used, regime change in Iran. The United States, in the last year or two, has actually made some really great progress with Iran. We haven’t necessarily fixed the problems that they’re having, as far as human rights violations and basic degradation of women, but we have crippled their capacity to make nuclear weapons. We’ve lifted some sanctions in response, that was all part of the Iran deal.

John Bolton though, none of that is good enough. They just want to go in there, guns blazing, take out the sitting Iranian government, and replace it with their own version of some kind of Middle East democracy. I don’t know if John Bolton has been paying attention to American foreign policy for the last sixteen years. I have to assume that he is not, or perhaps that in the last six years, eight years, he has had some kind of traumatic head injury, maybe he’s developed Alzheimer’s, because the last time the United States went into the Middle East, guns blazing, screaming, “regime change”, things didn’t end so well. Tens of thousands of dead US soldiers for what? Look at Iraq today. That’s what Republicans were talking about all through the campaign. How horrible things have gotten there. Well things didn’t just become horrible in Iraq, they became horrible because of our horrible policy towards the Middle East. We did that. Now they want to turn around and do it to Iran.

We know that Donald Trump is unstable when it comes to being such an ardent war hawk. He’s going to go along with it, if John Bolton says to do it, because Donald Trump’s and idiot that doesn’t know any better. He doesn’t know how to handle foreign policy. When you top that off with some of the other people that Trump’s trying to put in place, the guy he’s trying to put in charge of the CIA says that we need to tear up the Iran deal and possibly consider military intervention.

We’re going to have a war with Iran, folks. That is the reality of what’s happening here if these people get put into place by Donald Trump. There is no other way around it. It’s time to face reality here. Donald Trump’s America is a hawkish bully nation. It’s going to bite off more than it can chew. Of course, as usual, the only people that pay the price are going to be the soldiers that go over there and die, and their families back home who now have to live the rest of their life knowing that their child or their father or their mother, sister, brother, died because of United States government incompetence led by Donald Trump.