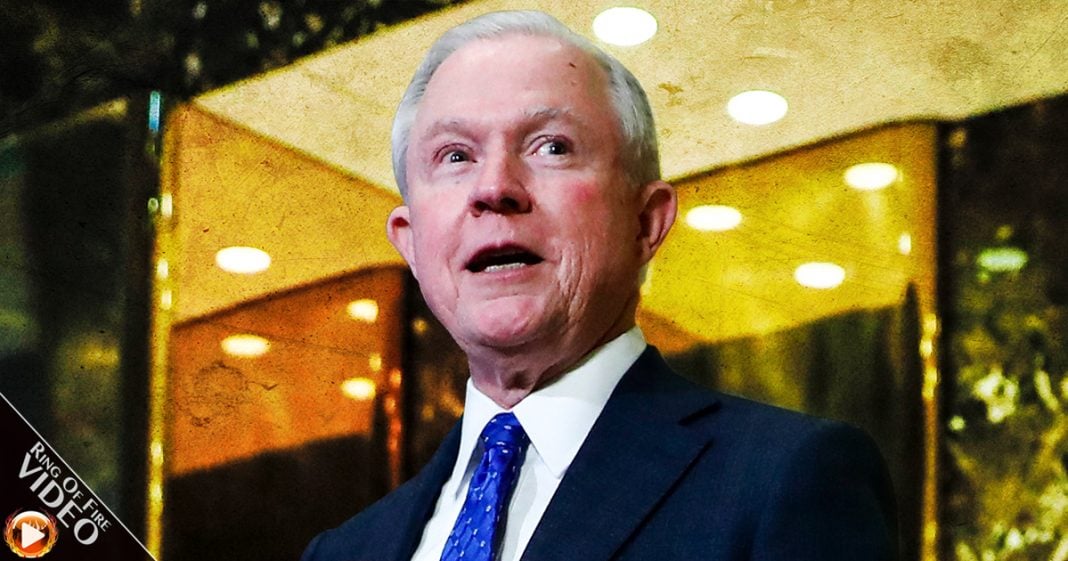 Ring of Fire’s Mike Papantonio and Sam Seder discuss the appointment of Jeff Sessions as attorney general by the new Trump administration and his history where is comes to the justice system.

Sam:
Pap, we are learning more and more what the Donald Trump administration cabinet is going to look like. This week, I should say at the end of last week, he announced that, among others, that Jeff Sessions, I should say, is going to be his attorney general, which is a rather shocking turn of events, isn’t it?

Pap:
Yeah, I think, you know, it’s just typical of the media. They focus on a couple of things and miss the other huge pictures. This is a guy who wants to shut down the civil justice process for everybody except corporations suing corporations. He was Karl Rove’s right hand henchman where it came to packing the Alabama Supreme Court and appellate courts with people who were barely… I mean, this is no exaggeration when I tell you they were barely judges. They were simply people who did the bidding of the Republican Party to trash the Democrats in Alabama. This is a vicious little character. There’s no other way I can describe Jeff Sessions.

It wasn’t that he, he was perfect for Alabama, but Alabama’s not a reflection, fortunately, of the rest of the country, and you know this story, of course, about his problems with race. His whole idea about the voting rights act was to say that it was too intrusive, that we don’t need it, that Alabama and Mississippi in the southern states were so far ahead that there’s no need for a voting rights act, which is going to give you a lot of indication about what he’s going to do in regard to really trying to ferret out voter fraud. What he’s going to do is he’s going to go after voter fraud in a big way. Matter of fact, he did that… He’s done it already. He targeted a handful of black activists who were just in the process of trying to get people registered to vote, and by the end of it, it was just all a scam.

Out of 1.7 million votes cast, they found fewer than 10 votes where there was even a question about the registration, but nevertheless, he went on national media knowing that, and talked about how he had saved the system from voter fraud. This is a dangerous little guy in so many respects. He’s got things he can do in regard to enforcing laws in environmental issues, enforcing laws where Wall Street is stealing mom and pop’s money, enforcing issues where the pharmaceutical industry is creating dangerous products that are killing people and him taking no action. The Chamber of Commerce has given Jeff Sessions more money than he could possibly spend because he is purely a corporatist that is there for the U.S. chamber of commerce. They created this guy, they built his career, and if the Democrats ever, ever want to show that they have a backbone, this is the place to do it. My bet is that they won’t, because we just know too much about them.

Sam:
I’m not sure what they can do. I mean, we’ll see if, I mean, I suppose it’s possible they’ll have the 40 votes to filibuster here, but you hear of folks like Joe Manchin from West Virginia. You’ve got another handful of senators running in red states. The amazing thing about this Jeff Sessions character is that he has a very long record, and you’ve spelled out a good chunk of it here in terms of things like civil rights, which is not to say that someone can’t have a tarnished civil rights record, right? When he sees the voting rights act and says that’s an intrusive piece of legislation or he targets a black activist because they’re registering voters in Alabama or he has no problem with blatant racism coming out of the mouths of judges in Alabama, et cetera, et cetera, if this guy had gone on in his career as a senator, to show that he had turned some major leaf, Pap, right?

If this guy had gone on to fight for reconstituting the voting rights act after the Supreme Court gutted it in 2011, then I think that we would have a different perspective on this, but there’s no indication that this guy has changed even remotely in this respect. He’s going to be the chief law enforcement officer in the country, and here’s what really scares me about a character like this, Pap. You see the Trump administration… Now, putting aside the sort of more banal and typical problems that we have with corporatists. You know, Eric Holder, for that matter, was also a corporatist. I don’t know that he’ll be as a giveaway artist as Jeff Sessions, but even putting that aside, we see his administration, the Trump administration, being staffed, dancing around, just about every Islamophobe in this country who holds any type of credential, right?

Whether it’s Frank Gaffney running the transition, whether it’s going in and bringing Tulsi Gabbard, who he doesn’t agree with except for on her problems with Muslims, it seems to me, you’ve got Bannon in there, you’ve got Flynn, who was is off the charts when it comes to this stuff, and who knows where they’re leading? But you’ve got a guy like Jeff Sessions who clearly has disdain for things like civil rights.

Pap:
Yeah, but see, here’s the problem, Sam. I’m with you on civil rights, okay? I got it. I’m with you on voting. I’m with you that these things that are front page, top of the fold issues. What the media doesn’t understand is this guy does damage far worse than what he’s going to do with civil rights, okay? He has at his fingertips ways to shut down any type of activity that might bring Wall Street under control. Now, you think the inaction by Holder and the inaction by Loretta Lynch is disgusting? Wait til you see the affirmative steps-

Pap:
That sessions is going to make to where it’s easier for Wall Street to steal from people and not get fined and not get prosecuted. Wait til you see what Jeff Sessions is going to do to lobby to make it more difficult for the average American to take a corporation to court when the corporation has caused somebody’s death in that person’s family. Wait til you see what Jeff Sessions is able to do without legislation to shut down any type of meaningful prosecution of the worst catastrophic polluters in the world coming to the United States and destroying our rivers, our streams and our air.