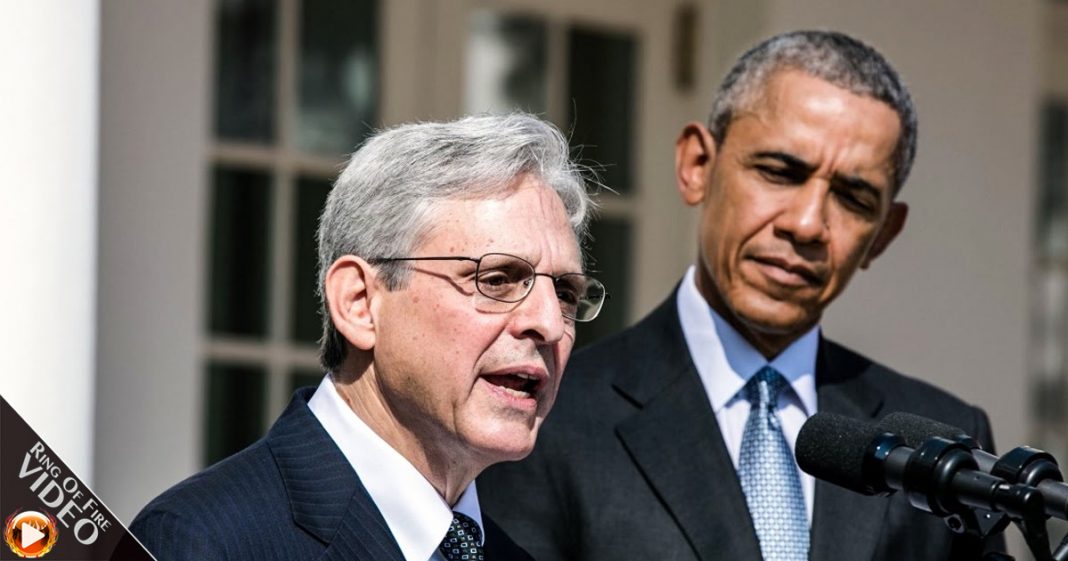 Ring of Fire’s Mike Papantonio and Sam Seder discuss Obama’s failure when it came to appointing a Supreme Court justice before the end of his presidency.

Sam:
As you know, the Republicans have broken all precedent, have shattered all norms, and have refused to provide a hearing for Barack Obama’s Supreme Court nominee. This, of course, is the fifth vote. It hangs in the balance. The direction of the court hangs in the balance at least until any of the other members of the court exit, and there is at least two or three I think where it would be hard to imagine they will be here in four years in one way or another. Certainly in terms of those in the nominal left, I hope they eat their Wheaties.

Barack Obama has the arguable ability to put a member on the Supreme Court as a recess appointment. I know that you know this, Pap, but let me just get this out there. I know there was a case in 2014 involving the National Labor Relations board and a recess appointment then, and I know that the Supreme Court I think unanimously found that the maneuver by the Republican senators to basically do a pretend recess, or I should say a pretend session so that there was effectively no recess passed muster according to the Supreme Court. However, many of the things that they talked about in terms of what constituted a recess were dicta and not directly related to the ruling at hand. It does seem to me conceivable that an attorney in the office of legal counsel of the Department of Justice could find that Barack Obama does have the ability as President to make a recess appointment, and if I was Barack Obama, I am not.

Sam:
If I were Barack Obama, I would withdraw Merrick Garland’s name. I would nominate a younger justice, perhaps one of color, one who is going to be a more dynamic figure, because this is going to be a very controversial thing to do and people are going to want to know a lot about this person, and I would recess appoint him. I would write that letter. I would send it over.

Pap:
It’s not that he can’t do it, Sam. You know he can do it. Can he go through the motions of doing it? Yes, he can. Will he do it? Listen, you have Obama right now trying to get the American people to make nice with the crazy man. Make nice to the crazy guy and maybe we’ll be okay. It’s like everybody’s in a room and there’s a guy that’s going around the room poking everybody in the eye with a stick, and somebody says, ‘Okay, be quiet, be nice, and maybe he’ll be okay.’

First of all, Obama’s constitutional background won’t allow him to do that because he’s a constitutional professor and he realizes this would be a big bump in precedent. Not only that, but Obama’s trying to tell the American public ‘take a breath. Let’s make nice and let’s see if we can just start rebuilding.’ This is a guy who doesn’t have the personality to do this. Would Donald Trump do it if he were in the same boat? Yeah. He would do it. Will Obama do it? No, he won’t. He is built differently completely.

This is a guy that spent, as we talked about earlier, two years trying to make nice with people that would do everything they could to disappear him. If they could disappear him, they would’ve done it, but he forgave them, I guess. That was the weirdest experience I ever experienced. It was this weird thing where he was talking about

I’d like to hear a speech on it, but he’s not going to do it.

Sam:
Yes, I wish, Pap, I had a counter argument for that. I really do. I don’t think he’ll do it, but I think, there again, his value for the American public and there’s going to be efforts to get him to do this, and I think if only it makes a greater awareness of the norms that the Republicans have shattered. This is the problem is that there has been no, and you know this, and you’re just as frustrated if not more so than I, that every time the Republicans broke a norm, every time they shattered the way that we have done business, the Democrats just said, ‘Well, maybe if we don’t do anything about it, it’ll get better.’

Pap:
‘If we’re real quiet, the crazy man will go away.’

Sam:
The one time that we did see this was when Harry Reid got the senate caucus to nuke the filibuster for executive appointments in federal judges, and I’ll tell you something, it worked without consequence.

Pap:
I was going, “Who is this guy?” Somebody’s taken command of his body. It was not Harry Reid.

Sam:
Pap, can you imagine the situation we’d be in right now if the first DC circuit court in Washington was a Republican dominated court? Of course, many things that come through there are going to get sent up to the Supreme Court and are going to get reversed, but they can’t reverse all of it. That’s the one court in the country that is still going to allow the US government, it seems to me, to function in the way that most Americans anticipate a government should.

Listen, Pap, we only have 2 minutes left here. I do want to touch on one thing. Supposedly, and I don’t know if I buy this, there is a rift between national security hawks outside of the soon-to-be Trump Administration, and the Trump Administration. I’ll tell you why I don’t believe it. Because John Bolton is even allowed in the perimeter of the White House. I don’t buy it. We’ve only got 45 seconds left. What is your take on it?

Pap:
Here it is. This all comes down to the Russian scare. The Democratic DNC Russian scare that has now been perpetuated as of this week by the NSA that Putin was back in some room hacking the DNC’s computer. That’s what this is all about. It all comes down to this simple thing: Look the other way. Don’t ever believe for a second that the people behind the curtain did anything wrong, like maybe Podesta might’ve done something wrong, or Hillary Clinton might’ve done something wrong, where it comes to what they did to Bernie Sanders. Don’t look at that, look at the Russian scare. We have an interview in this show that I think lays it out very well. It is a big fraud.