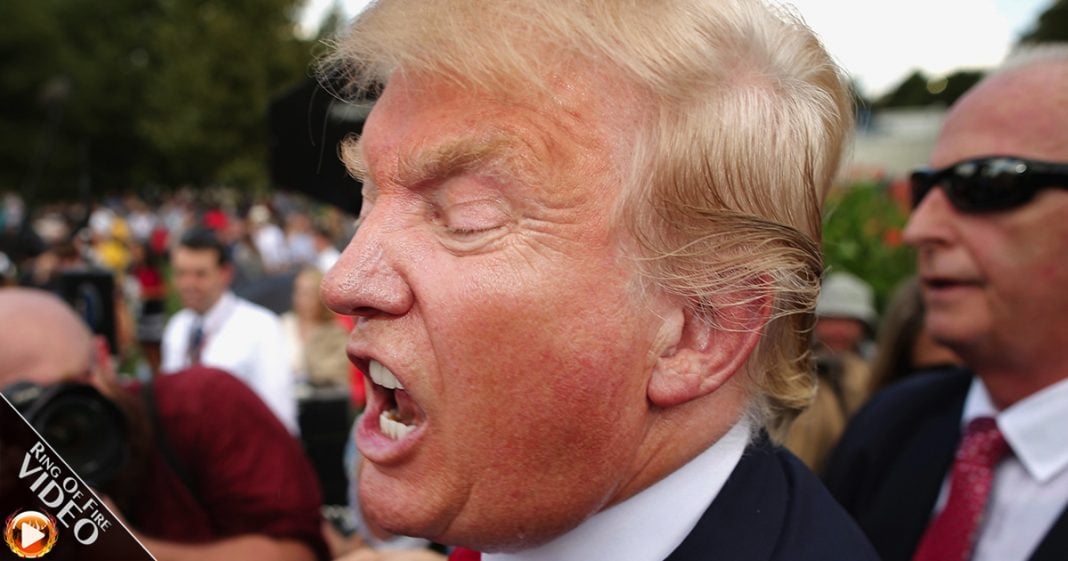 The Democratic Party has been relatively silent about some pretty major issues facing Donald Trump – the fraud lawsuits, his conflicts of interest, the rape allegations – this are issues that every single Democrat should talk about at every given opportunity. We cannot normalize Donald Trump and his brand of hate and sexism. The Ring of Fire’s Farron Cousins discusses this.

I’m a little disappointed in the Democratic party right now, and not just because of the election losses and blah, blah, blah, the infighting. Yeah, we need to change things, but that’s not the point of this right here. Why I’m mad at the Democratic party today is because they are not attacking Donald Trump at every given opportunity. There should not be an elected Democrat in this country that ever does an interview, or goes on television, or gives a speech where they do not attack Donald Trump and his horrible, horrible policies and his horrible cabinet.

That is what we have to do. It’s not just his policies, it’s his personal problems that he has. The man is still facing a fraud trial at the end of this month. That’s still a thing. The rape case has been dropped because the woman received death threats from Trump supporters, but that doesn’t necessarily reduce the validity of her claims. He’s asked for top secret security clearance for his kids, then he backed off that when people started, he said, ‘Oh, I didn’t do that.’ Yeah, he did, his aides did that.

Not only that, but his daughter, who’s supposed to be in charge of his blind trust while he’s President, not allowed to basically have any interaction, sat in with Trump’s first meeting with officials from Japan, a conflict of interest. Conflict of interests abound in what Trump is doing these days, and that is what the Democrats have to be talking about.

Do you know why? During Hillary Clinton’s campaign, did you ever, ever hear a Republican speak where they didn’t either bring up emails, private servers, Benghazi, Bill Clinton? Every single time a Republican spoke, they mentioned one of those scandals, or more, if they were clever. That is what the Democrats have to do. Unlike the attacks on Hillary Clinton, for most of those things, these are very real. Conflict of interests that are bordering on the illegal, the fraud lawsuit, Trump University, the man’s many bankruptcies, pick a frigging scandal, I don’t care which one it is. Pick a failure and run with it every time.

That is what every Democrat needs to do to delegitimize his Presidency. Yeah, I went there. Delegitimize the man. He’s a piece of crap, and he deserves to be treated like that. He does not deserve a chance. I am sick and tired of hearing people in this country, Democrats and moderates say, ‘Well, we should give him a chance.’ You know what? He already blew his chance by putting people like Jeff Sessions, and Steve Bannon, and John Bolton in positions of power. Done. There is no playing nice.

That’s where the Democratic party always screws up. ‘Let’s play nice. Let’s give him a chance. Let’s not act like Republicans.’ How’s that been working out for us? Point to all those electoral victories where we didn’t have someone at the top of the ticket who was a fighter. President Obama, in his campaigns, was a fighter. Hillary Clinton, not so much. John Kerry, sure as hell not in 2004. We need fighters in the party today. Yeah, sometimes you got to get vicious like the Republicans, but the difference is that our attacks are real, they’re based on fact. They’re based in reality.

That’s what we have to do, and we have to do it every single time we get in front of a camera, every time we talk to a reporter, any time anyone is listening. That is our job, and the job of every elected Democrat in this country for the next four years. You’re not going to make him a one-term President when all you want to do is sit there, put your hands in your lap, and say, ‘Well, let’s give him one more chance.’ Not going to work, and I’m not going to tolerate that.