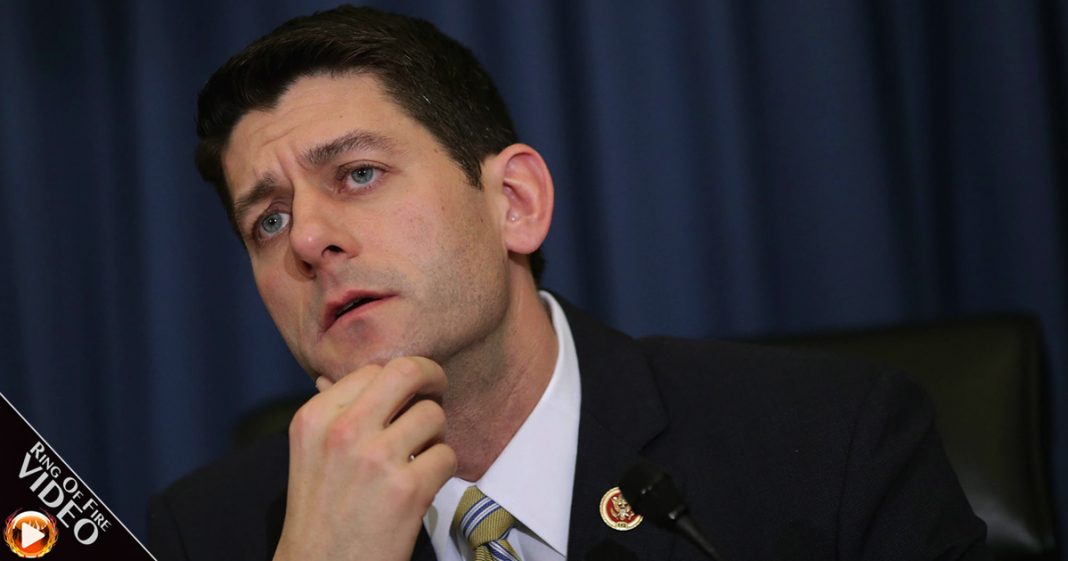 Paul Ryan tweeted out that he would help struggling Americans by removing “regulatory red tape.” How can anyone honestly believe that regulatory red tape is hurting them…well, unless you’re a member of the top 1% that owns a Fortune 500 company, that is. The Ring of Fire’s Farron Cousins discovers this.

In case you haven’t noticed, Paul Ryan has been campaigning essentially for president in 2020 for the last six months. Now, that was of course back when he thought that Donald Trump was going to lose, so his chances for 2020 may have been dampened just a little bit. Although he could also present a primary challenge to Donald Trump, if Donald Trump does what everybody thinks Donald Trump is going to do.

Nonetheless, Paul Ryan is trying to come out as some kind of champion for the middle class, someone who’s anti-poverty and just really wants to help American workers. So Paul Ryan Tweeted out the following here: “We’re going to help fix the problems plaguing our country.” Then he has a little checklist. How cute. “Sky-rocketing healthcare costs, border security and regulatory red tape.”

Damn, Paul. You were so close after that first one, to actually listing issues that people care about. Rising healthcare costs, hell yeah. Every American’s concerned about that. Unfortunately, it’s your party that is so deeply in bed with the health insurance industry and big pharma that’s helping to keep those costs high for everybody. You won’t acknowledge that, so you won’t fix it, but at least you understand yes, that’s a concern.

When you go look at say maybe a construction worker, a steel mill worker, a teacher, regulatory red tape, not exactly something that’s on their list of concerns, because it’s not something that affects their jobs. You know whose jobs it does affect? CEOs. Corporate leaders. The top 1% of income earners. Those are the people that Paul Ryan is trying to help. His little Tweet there, his little checklist proves it.

He doesn’t care about the middle class, because if he did, he’d want stronger regulations for businesses, because every study that’s looked at it has proven definitively that regulations do not kill jobs. In fact, enforcement of regulations creates more jobs every time. It’s not a fluke in one area of the country or another. Every single time. But Paul Ryan wants to do away with those regulations.

Do you know what some of those regulations are? Environmental protections, saying that a CEO can’t dump his company’s toxic waste into your water supply. Workplace regulations that say your worker has to create a safe working environment so you don’t get your arm cut off or your head smashed in by heavy equipment. Paul Ryan wants to do away with things like that. It doesn’t benefit the workers. It doesn’t increase their pay. It doesn’t increase their quality of life. It does reduce the overhead for a CEO who no longer has to worry about providing hard hats. It doesn’t have to worry about safely disposing of toxic waste. Those are the people Paul Ryan’s looking out for. Those are the people the entire Republican party is looking out for.

They don’t give a damn about you. If you think that they do, just wait and see what’s going to happen. Because we saw it during the George W. Bush administration. WE saw what happened when you loosen regulations on businesses and Wall Street, and every time it ends pretty horribly for American workers.