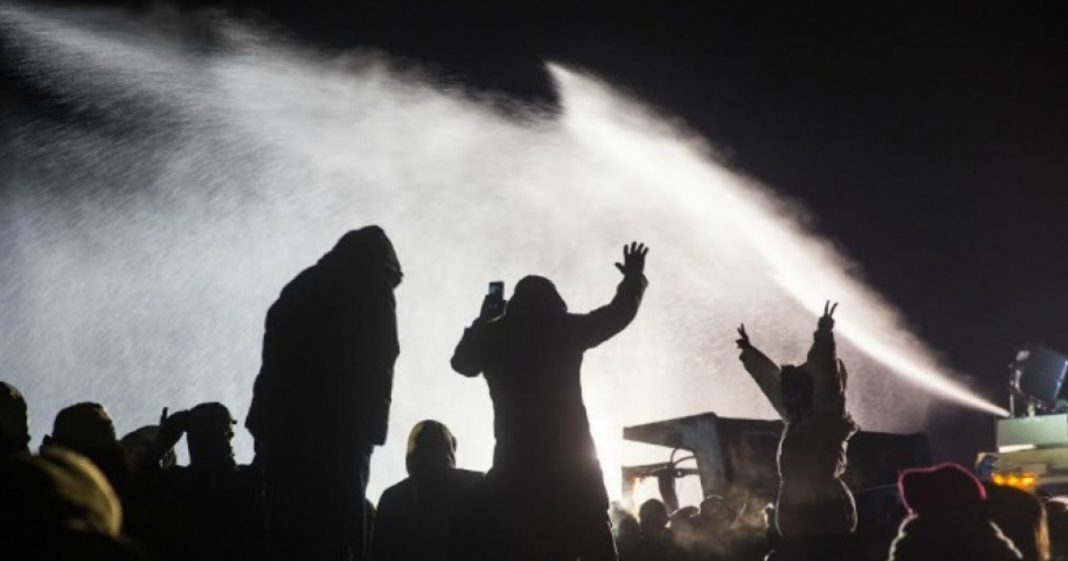 Though our federal government refuse to aid the water protectors who are trying to protect the rights of thousands, as well as the water source of millions, we can continue to give a voice to the human rights violations happening right now on American soil.

During the assault on over 400 trapped water protectors on Sunday evening, many who suffered at the hands of the oil police made sure to remember their traumatic interactions so that those not at the Dakota Access Pipeline Protest may truly understand what is going on in the remote stretch of North Dakota.

As reported by PriceofOil.com and The Daily Beast, one young water protector and a member of the Ojibwe nation said that he was shot multiple times by police while the officers seemed to draw pleasure from his pain.

“He shot me with a rubber bullet right in the belly button, and when I showed him that he had hurt me, he just smiled and shot both my kneecaps.”

Elsewhere, a young woman was pelted with a concussion grenade which detonated on her arm, causing massive pain and damage – she may lose her arm as a result.

The oil police presiding over this oppression have made it clear that we cannot trust their narrative. Police claim that they are unaware of any injuries they caused on that night, despite the fact that the Water Protectors have reported over 300 injuries, several requiring hospitalization.

Where is President Obama? It seems we’ve been calling for him so long that we’ve lost our voices. Now that we are day away from thanksgiving, it seems almost immoral to celebrate the holiday at all while our native brothers and sisters are suffering fighting a battle for the rest of us.

This year will no doubt be the most authentic Thanksgiving since the very first – a despicable truth.