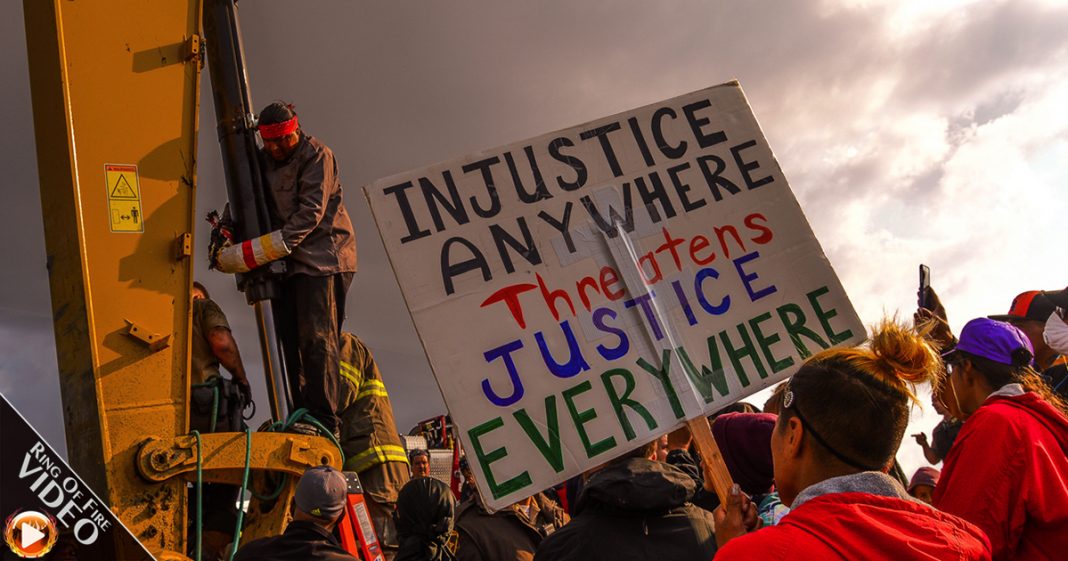 Donald Trump and many of his key advisors have a financial stake in the Dakota Access Pipeline, so unless President Obama kills the project immediately, it will almost certainly be approved once Trump takes office. The Ring of Fire’s Farron Cousins discusses this.

There’s still protests happening over the construction of the Dakota Access Pipeline. A lot of brave people out there right now trying to stop this disaster of a pipeline. Two very important people, however, are not trying to stop it. That includes current president Barack Obama, and incoming president Donald Trump. President Obama has said that, ‘We’re going to take a look at it. Consider maybe just rerouting the stupid thing,’ which is a bad idea. It doesn’t matter where you reroute it. It’s a pipeline. Pipelines in the United States and Canada leak constantly, and nobody does anything about it.

We’ve had over 220 pipeline leaks just this year. In the first year of the Keystone I Pipeline in Canada, it averaged one significant leak every three weeks. Pipelines are a bad idea. They’re highly inefficient, but that’s a topic for another day. President Obama just wants to reroute the thing. Donald Trump, on the other hand, wants to make sure that the Dakota Access Pipeline goes through as planned. There’s a very specific reason for that. According to Kate Yoder at Grist.org, Donald Trump and a lot of his buddies, they actually have a financial stake in the Dakota Access Pipeline, which means that if this thing doesn’t go through, they’re going to lose a lot of money.

Here’s the list from Grist.org. Trump has personally invested between $500,000 and $1,000,000 in Energy Transfer Partners, which is the company that’s constructing the pipeline. Has an additional $500,000 to $1,000,000 holding in Phillips, which would have a 25% stake in the completed pipeline. Energy Transfer Partners chief executive Kelcy Warren donated $103,000 towards Trump’s campaign. Harold Hamm, CEO of Continental Resources, is a campaign advisor and leading candidate for Energy Secretary under Donald Trump, and John Paulson, who is one of Trump’s campaign advisors, is heavily invested in Bakken oil and gas, and that’s what’s going to be flowing through this stupid, horrible idea of a pipeline.

If you have any question about whether or not Trump would do anything about this pipeline, the answer is, yes, he absolutely would. He would make sure that on day one of his administration, we go ahead and start putting this thing in the ground, because he’s going to make money off it. Make no mistake, that is why Donald Trump ran for president. Because he sees it as a huge opportunity to make more money. That is all he wants to do. That is all he cares about in life. That’s all he’s ever cared about in his life, because that’s all his father cared about in life. That is what the Trump family is. They’re con artists, just looking to make a quick buck. That’s all the White House is to Donald Trump. It’s a four-year excursion to make more money, and it’s going to work. President Obama right now could kill the Dakota Access Pipeline, and then in two months, Trump can just renew it. Put it on steroids. Maybe make it twice as big, twice as wide. More pipes, side by side, running through this sacred ground.

It’s because President Obama didn’t take action sooner. He could have killed this thing a year ago, put it out of everybody’s heads. Everybody would have forgotten about it, including Donald Trump, but that’s not the kind of president President Obama has been. He’s just been, ‘Whatever, we’ll kind of see what happens.’ That’s not okay, because now all of those “we’ll just see what happens” get handed over to President Trump. That should scare the hell out of every single person in this country, whether you voted for him or not.