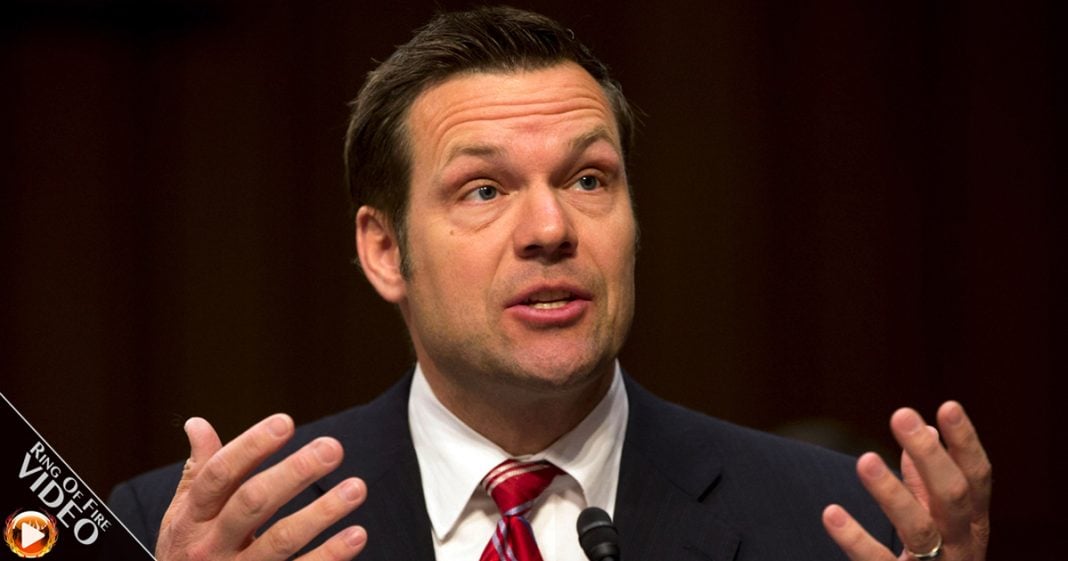 Kris Kobach, a top Trump adviser, has said that he wants to reinstitute a Muslim registry that was discontinued in 2011 after reports of racial profiling and people being denied due process. Kobach believes that anyone who isn’t a white Christian is fair game for deportation. The Ring of Fire’s Farron Cousins discusses this.

Kris Kobach, one of Donald Trump’s advisers and noted racist, I guess you’d call him. Guy responsible for drafting these horrible immigration laws in Arizona and Alabama designed to keep immigrants out has come up with a new plan for the Trump administration and he wants to implement some sort of Muslim registry where anyone coming from a Muslim country who identifies as a Muslim, you’ve got to sign up. You’ve got to go and check back in with the government every couple weeks or months so we can make sure you’re not a terrorist because you’re Muslim. That’s what Kobach wants to do. Donald Trump seems fairly open with it and right now everybody is freaking out about this because it is reminiscent of the Japanese internment camps that the United States put in place during World War II. It is just as oppressive. Well, I can’t say just as oppressive. Obviously we’re not rounding them up and putting them in it internment camps yet, but it’s just as a disgusting idea.

Here’s the thing that I think a lot of people miss and ThinkProgress correctly points this out. We already had the system in place from 2002 to 2011. I can tell you, as somebody who worked in the political media during that entire time, I didn’t know that. I didn’t know that that was a thing in the United States for nine years that only ended five years ago. Honest to God, as much as we have talked about this I didn’t know that. I’m very grateful for ThinkProgress for pointing this out. It kind of makes what Donald Trump’s guy Kobach talking about even more disgusting to learn that we have been doing this for most of this century. What the hell is wrong with us to where we think that just because somebody is a Muslim they’re automatically a terrorist? Look at how many people in the United States have died at the hands of white, conservative Christians since the 9/11 attacks. I don’t have those exact numbers with me now but I can tell you that the FBI and the CIA consider right-wing domestic terrorism a much greater threat to the United States than Islamic terrorism.

There is a reason for that. You can’t profile someone by their religion. That’s what the FBI and the CIA are trying to tell us with this. It’s not because they’re Christian, it’s because they’re radicalized. Religion doesn’t play a role in it. That’s the same thing with Muslims. This is all very reminiscent of the 1930s and 40s. I hate to say it but you’ve really got to start looking at those parallels. Maybe we should make them sign up to a registry. Maybe we should put them in this camp.

People, be afraid, but more importantly, be active. Stand up against this kind of hate. This is getting out of control. To be honest, hold George W. Bush and Barack Obama accountable too because apparently they pulled off this same kind of bullshit while they were in office. Again, a lot of us had no idea and I hope that most people watching this, if you didn’t know it you’re just as shocked as an angry as I am. No one in the United States should have to sign up in any kind of registry because of who you are. That is sickening and it’s disturbing. It doesn’t matter the color of your skin, the religion you subscribe to, your sexual preference, your gender. That should not be grounds for discrimination, ever, in any case. There is no excuse for it ever. If you think that it is you’re the one with the problem and maybe you’re the one that we need to be keeping our eyes on.