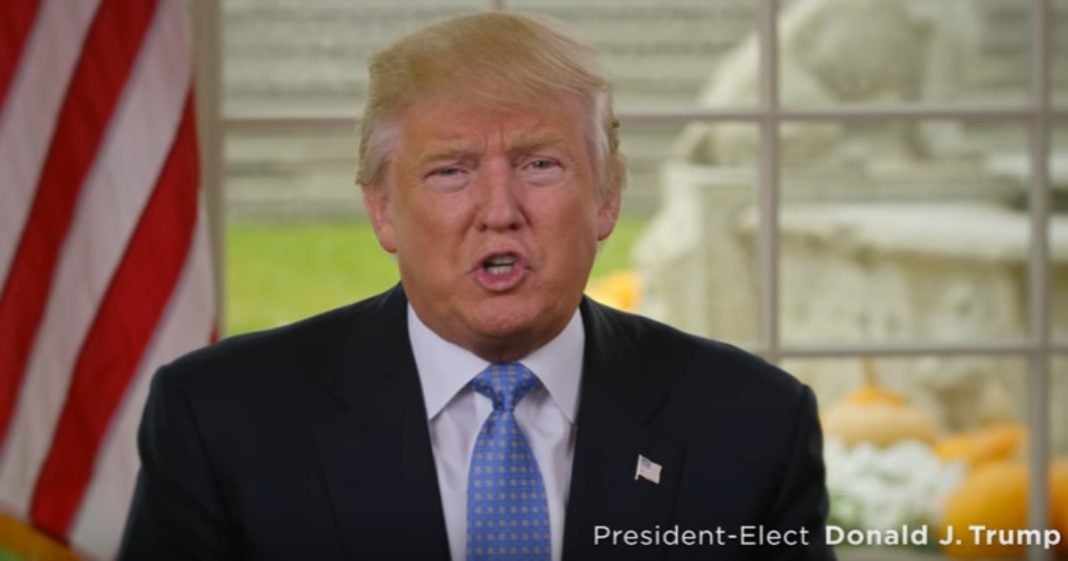 So much for corporate media – as useless as it sometimes is – as for the next four years (or forever), we can look forward to state-sponsored Trump TV which will deliver the carefully constructed message that President Trump wants us to see. Meanwhile, any legitimate media will likely have extremely limited access to the POTUS, ensuring that we have no idea what is truly going on in the White House.

On Monday, the PEOTUS released the first of many promised videos where the president-elect may speak directly to the American people, providing the same empty promises and substance-free rhetoric they know and love.

In this video, President-elect Trump lists off several things he intends to accomplish during his first 100 days, as well as assuring Americans who haven’t been paying any attention that his transition is going as smoothly as it can. Super smooth. Like creamy peanut butter.

“My agenda will be based on a simple core principle: putting America first. Whether it’s producing steel-building cars or curing disease, I want the next generation of production and innovation to happen right here on our great homeland — America.”

I’d be really curious to know if his daughter is still writing his speeches? And does anyone remember the good old days when Trump said reading scripted material was cheating? Guess PEOTUS Trump doesn’t feel the same way.

Watch this, and remind yourself for the hundredth time that this is really happening.